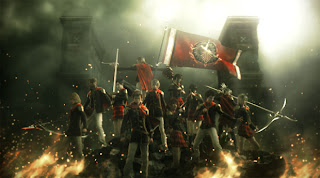 Square Enix gets a bad rap from self-proclaimed “hardcore” gamers for taking games like Theatrhythm, which was always a touchscreen-only experience, and then releasing them on iOS. Something about a lack of buttons being an issue on a touchscreen-only game… I dunno. I long ago gave up on trying to follow the logic of those self-proclaimed “hardcore” gamers and their attitudes towards iOS gaming.

That tangent aside, Square Enix has a tantalising little iOS game on the way. Final Fantasy Type-0 is a really good PSP game (tragic death of a chocobo aside). Final Fantasy Agito is the iOS game that’s on the way that’s based on that PSP game that never quite managed to be localised in the west.

The game will look better than the PSP game by virtue of being released on a vastly more powerful device in modern smartphones and tablets, and will come with asynchronous multiplayer, which as we’ve seen, can be a compelling experience indeed.

The point of concern is the fact that the game will be free-to-play, with microtransactions apparently in place for costumes and things. Square Enix certainly has a better understanding of how to do microtransactions than, say, EA (for the most part), but whatever happened to those days where Square Enix was insisting that its games were worth a premium iOS price point? For a good SE game I’ll happily hand over $20 or so on the App store.

Anyway, it’s too early to make any firm claims either way here. It’s something we’ll be keeping our eyes on, that’s for sure.

Game Atelier’s Tiny Death is alive on the iOS Marketplace