Theatrhythm is one of the finest games on the 3DS. For fans of Final Fantasy, it was a love letter – pulling together one of the franchises’ greatest strengths, the music, and bringing it right to the front of the experience.

And it was inevitable that it would appear on the iOS devices. After all, the game is controlled entirely by touch screen, so there was nothing to lose in terms of controls fidelity in a port to a touch screen-only device. The style of the game also suits a freemium model well, which in turn suits the iOS platform nicely.

And so Theatrhythm is now on the iOS. Even better, it’s not in the slightest a lazy port. Square Enix have clearly listened to feedback from the 3DS version to come back with a title that is far more refined and a far better game for it. 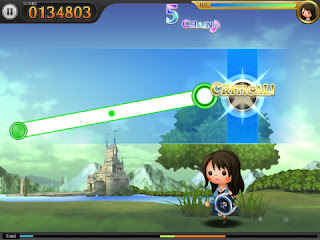 For a start, with the 3DS game, Square Enix saw fit to include a Final Fantasy-style levelling system, complete with skills to unlock and equipment to customise the characters with. As nice as this idea was in execution on the game it didn’t achieve much. Most players ended up ignoring that side of the game to simply play the rhythm game; the reason they bought the title in the first place.

With the iOS version of Theatrhythm, there’s still a levelling system, but it’s completely backgrounded and barely interactive. Different characters end up with slightly different skills which have minor effects on what happens in the game, but it’s barely noticeable. For the most part the characters are no more than aesthetic choices in-game, and that’s of great benefit to the players.

The main addition to the iOS port of the game though is a massive boon that puts this version of Theatrhythm heads-and-shoulders over the quality of the 3DS game. The “creator” mode allows players to make their own sequences of taps and swipes to each and every song in their collection. Twitter integration makes this process very social, too, and I can see a strong community building up around this game as it is one of the easier to use examples of user-generated content that I’ve seen. High scores can also be shared via Twitter, which introduces a competitive edge to the game that the 3DS original lacks. 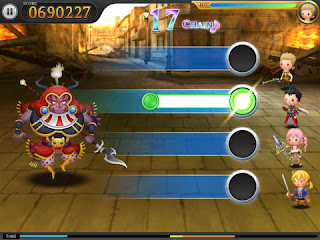 The downside to this game is, if you buy every single piece of DLC, it’s going to cost you about 1.5 – 2 times as much as you’d pay for the 3DS game and all its content (depending on where you live). In reality though you’re not going to download everything. Considering the characters are completely optional and the base download comes with plenty of them for free, there’s plenty to be saved there. Each song is $0.99 but thanks to a handy preview feature (which the 3DS version lacked), you can figure out whether you do like a track before purchasing it. All up, an investment of $30-$40 in DLC will set you up with an amazingly feature-filled game, and that’s a cost comparable to the 3DS game.

There’s a couple of 3DS features that are missing from the iOS game, too. The “event” scenes – where an in-game video from a Final Fantasy title would play in the background while you played along to the music – is gone. Those tracks have been turned into traditional “field” and “battle” music tracks though, so players aren’t missing out on the music. And, if the above paragraph makes no sense to you it’s because you likely haven’t played the 3DS game, so be assured you’re not actually missing out on anything significant here. 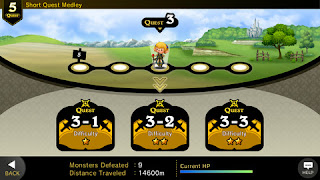 The feature that is missing is the “Dark Note” gameplay mode, which combined a couple of tracks into a single “level,” and was the incredibly difficult one that had the more serious 3DS players hooked for hours upon hours to try and unlock the goodies. Much of that functionality is replaced by players throwing challenges at one another though, and there is a “quest medley” which achieves roughly the same thing, so honestly I didn’t miss this feature.

There’s other incidental benefits (such as the game looking incredible on the iPad’s retina screen), but it really is that creation mode that has me addicted to Theatrhythm all over again. Make no mistake, though the iOS port loses some features from the 3DS game, thanks to the depth of the creation mode, this is the definitive version of the game.

The weekly discussion: The console of the year