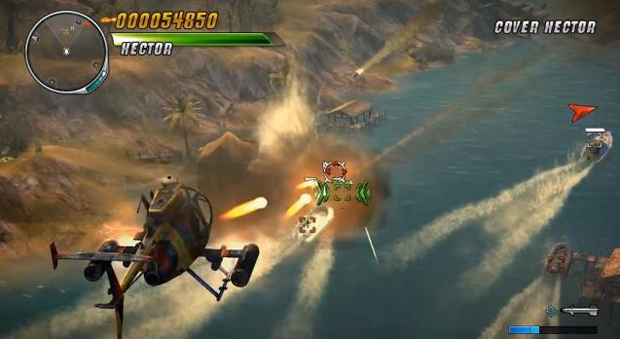 Thunder Wolves comes out of the gates, all of its guns blazing. It makes not apologies for being what it is: an shooting title that looks and sounds like it would be right at home with a buddy action movie from the 80’s. The V8 Ninja wrote up a nice review for the PC version of this game, giving it four out of five stars – but do I agree with the PlayStation Network version?

Before each mission, there is a brief bit of story with voice over that helps to try and set the tone. From the very first chapter the game had me laughing aloud and my oldest daughter taking on an incredulous look mingled with amusement. The first mission is of the training variety where you get familiar with the steering controls, different kinds of weapons, combating enemies in the air as well as on the ground and learn how to pick up crates and perform the actions needed to complete missions along the way.

The majority of the game takes place within your helicopter, where you are responsible for both steering and shooting. This gives most of the levels a somewhat open world feel, because you can move about as you see fit. There are three different kinds of choppers (attack, supply and recon), and each type has a handful of specific helicopters you can select from at the start of a level. This selection process mostly boils down to which kinds of missiles you get to use. 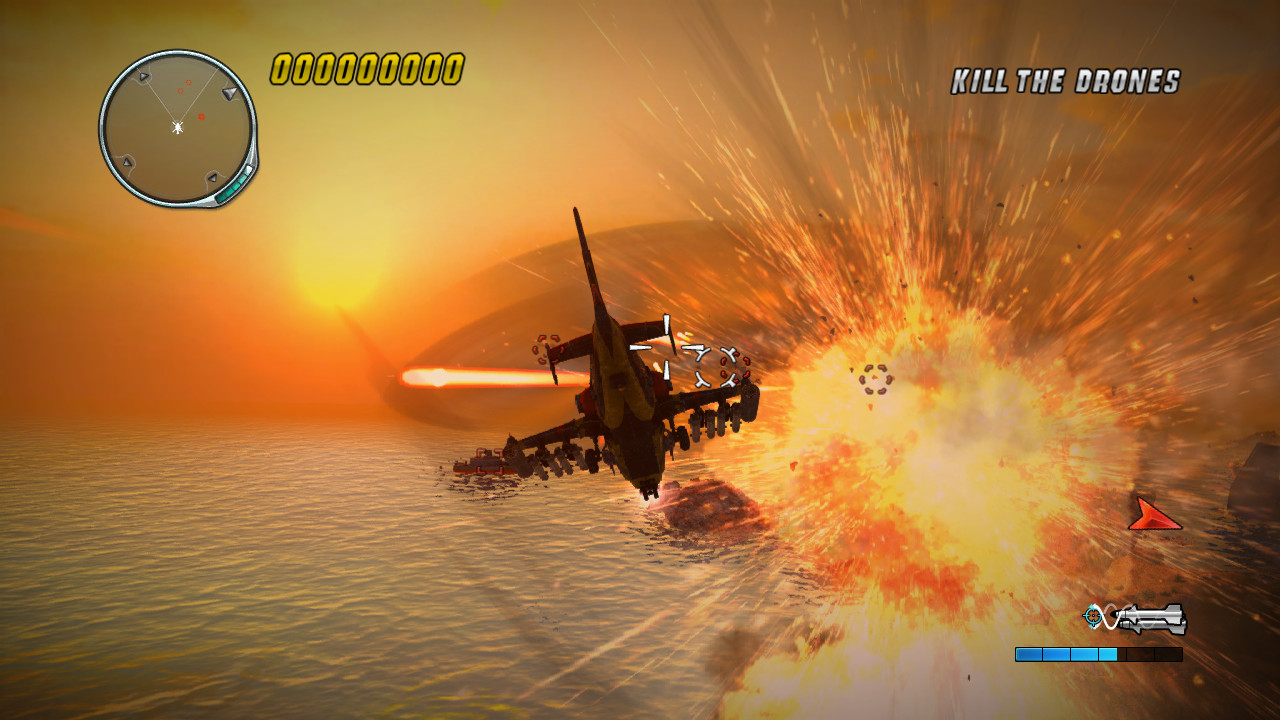 Combat is fast and furious – the amount of carnage you unload during a single run through Thunder Wolves is impressive. You have unlimited ammo, which accounts for a good deal of the carnage you create. The machine gun never overheats, so just hold that trigger down until your finger is cramped up. The missiles at least do have a cool down period, but you can carry up to three different kinds – so I found myself cycling through while laying down a steady stream of machine gun fire along the way.

There’s a couple of visual highlights, but in truth, the game itself really does not look all that great most of the time. The details and colours tend to make just about everything look the same, and the cut scenes really looked pretty basic as well. The framerate would sometimes suffer during incredibly intense moments of combat, but I do have to give some credit on this front. A lot of things are blowing up, fire is everywhere and the game never crawled to a halt. I was still able to move about the screen effectively, and able to target my enemies with ease.

Sometimes the controls could be just a bit overzealous – a quick tap to the left could send me a block out of my way, making the picking up of packages or special forces people a bit of a pain – especially when you are being shot at from all directions. One nice twist to the action is that you do have flares you can launch off, when you hear the alert sound that tells you a heat seeking missile is headed your way. Your life also regenerates similar to Gears of War – so as long as you do not have an objective that needs your immediate attention (a meeting spot within a certain amount of time or a convoy that needs protecting from a bunch of enemies), you can fly away for a few moments to get your health back in full.

While this is dubbed an aerial combat title, and it is true that is what you are doing most of the time, there are a few breaks in the action where you get to do something different. These moments include being a sniper, or just hosing down everything with the machine gun while the helicopter is taken through an on-rails segment, to driving a getaway vehicle and more. These sub-levels are generally less entertaining than the helicopter combat, but they do provide you a few moments to catch your breath as well. 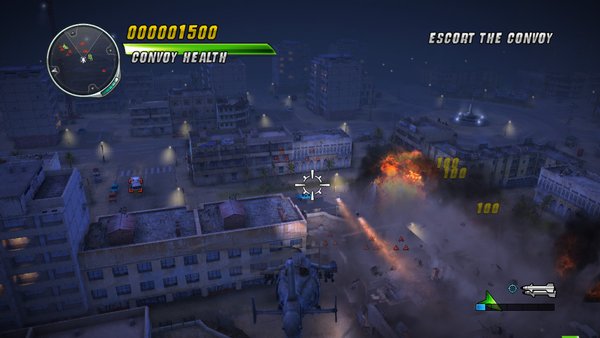 The audio was something of a treat here for me, with some over-the-top characters that would probably fit in with the next Expendables movie. Their quips could get a bit repetitive at times, but they were generally entertaining and actually made these characters you never really see quite likeable. On top of that there is a persistent rock soundtrack that just hammers away at you while you hammer away at your enemies and environment.

This can be described as dumb fun – but the key is, it is a lot of fun. The combat is pretty simple, and the missions all resemble one another by about halfway through the game and you can beat Thunder Wolves in about four hours, give or take depending on the level of difficulty you run with. There are some additional objectives and modes, like cooperative and attaining all three stars for each level, plus leaderboards for those who can accumulate lots of points through lots of damage, which does help the title’s longevity.