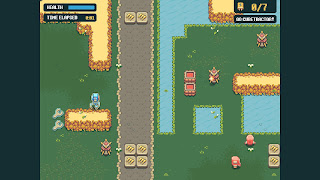 There are so many tower defense games out there that it comes as a nice change when a game comes along and tries to change up the genre. Cubetractor tries, but doesn’t succeed.

Listed as a “neo-retroesque action-strategy-puzzle hybrid”, Cubetractor sees you taking control of the little droid Endroi, who seeks to rid the lands of meanies by moving cubes. In fact, the only gameplay in Cubetractor is moving cubes. By combining two cubes together you can build turrets, barriers and generators. However you don’t really need to build turrets to take your enemies out, as hitting them with the blocks hurt even more. The problem there is that, Endroi is just as vulnerable to the blocks as the meanies are. Combine having to dodge your own blocks, while strategically pulling your blocks at the right time and place as well as having to avoid the ongoing shooting from enemy turrets… it’s a lot on your plate.

There’s a noticeable difficulty spike but generally it’s manageable. The part of Cubetractor that most players will find difficult will be the replayability. At the end of each level you will be given stars depending on how well you performed. The lower stars are easy enough to achieve, but to complete a level you normally need to go as fast as you can, without taking damage, and collecting everything. And with over 40 levels there is a lot to do here, but it’s hard to see anyone remaining engaged enough in the game long enough to achieve everything – it just doesn’t have that “one more play” appeal. 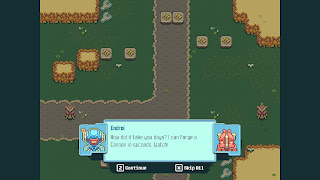 See it’s a little frustrating because what Cubetractor doesn’t do well is what it needed to more than anything else; pulling blocks. The mechanics don’t feel precise. And in an action puzzle game – even if it’s only a third of a puzzle game – I need precision. There’s a slight delay when I try to pull blocks and when two blocks combine together they’re not where you wanted them to be placed because the timing was off. This inaccuracy gets to become very frustrating because Cubetractor’s ambitions lead to some great ideas, but they’re let down by some basic puzzle controls.

It’s such a shame that it’s the little things that prevent me from enjoying this wonderful indie title. The 16-bit art style makes you want to keep on playing because it’s tapped into your memories of how much fun you had with these little puzzlers back in the day. The small dialogue exchanges at the beginning of each mission add a little humour. It looks polished and that what makes it so frustrating for me not wanting to play it.

I want to give Cubetractor a high score. It’s a cheap indie title with plenty of content, it’s beautiful to look at and listen to. But although the difficulty increases, you’re still making the same basic errors you made on the first few levels thanks to some controls that just don’t want to agree with you. And then you end up playing something else because at the end of the day you want to play something that gets the basic mechanics right.