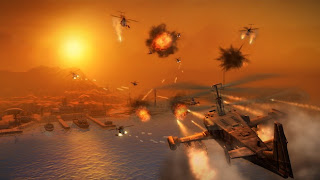 The video game industry is in a transitional phase. Yes, it is reaching that period every five or six years where new consoles start replacing old consoles, but this phase is much more complicated than just that. Along with those new consoles bringing uncertainty and doubt to the biggest corporations in the industry and the challenge to video game conventions and business models is at its highest point.
This is part of a reason why I really like Thunder Wolves. It is a game that does not care about its climate, its context, nor its implications. Thunder Wolves is a game that just wants to supply a good time, providing the player with a helicopter, clearly-marked enemies, and an infinite amount of missiles. (I like to call them, On-Demand Explosions.) 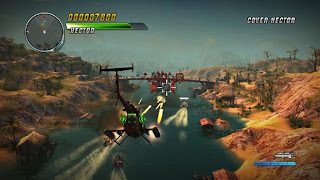 In Thunder Wolves, the player takes control of two people within the air division of the titular Thunder Wolves mercenary group, Blister and Max. Blister acts as the greenhorn while Max is the more experienced yet rowdy member in the action movie-inspired script. There is not a consistent overall story to Thunder Wolves, as instead the game highlights a few select scenes in the careers of these two gentlemen. The downside to this is that the story can be incomprehensible at times. The advantage to this is that the game gets to the good bits and stays there, bringing along appropriate dialogue that is delivered extremely well from actors who understand and embody their roles.
The gameplay is the main attraction of Thunder Wolves and throughout the campaign that focus is quite obvious. The action never lets up and the game has very little intention of forcing you to stop for such frivolities such as cut scenes. At times, the sure amount of gunfire almost rivals that of bullet hell 2D shooters, with dozens of bullets and missiles aimed directly at the player. While the game is not that difficult due to the third dimension/ free roaming and the ability to throw missiles off-course with flares, the sheer amount of action on-screen it is nonetheless impressive. 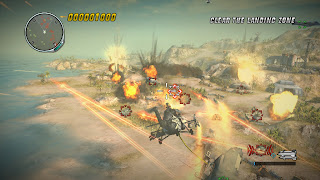 What adds to the feeling of unrelenting gameplay is player agency in combat. The helicopter controls work on the flip of a dime, reacting immediately to player input even at sub-30 frames-per-second benchmarks. Objectives are almost always player-driven, with nothing occurring until the player has taken action and even those objectives which aren’t player-driven make the player feel like they are performing the more gruelling task. Enemies attack quick and can attack hard, forcing the player to constantly be moving and counter-attacking. What enhances this further is that the game does not impose strict limits on the player as machine gun ammo is infinite and missiles along with health replenish over time.
There are a few tidbits of the game that do fall flat, however. Some of the mid-level mini-games within select stages don’t fit in well with the overall quick-paced action (most notably the snipping mini-game) and the game can be short, racking in a total of four hours for the average player. Extra difficulty levels and a score-attack mode do add to the lifespan of the game, but those are very take-it-or-leave-it options. Speaking of options, the game is clearly designed for consoles; there are no re-mappable keys (although I found most default control options acceptable), there are too few video options, and menus feel awkward when attempting to navigate them with a mouse.
However, those issues dissolve when the main action starts, and boy does that action go in a big way. It is rare to see a game that understands so completely the tone it wants to achieve, even among those with big-budget titles that are released to store shelves. While some people may call Thunder Wolves a one-trick pony, I argue that it achieves its goals almost flawlessly. The priority is nonstop action, and Thunder Wolves executes that to an amazing degree.