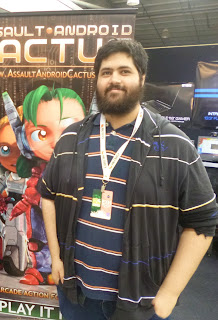 Last week at PAX Australia, Digitally Downloaded’s Sam sat down with Santana Mishra, the designer of Assault Android Cactus to talk about the state of independent development in Australia, the benefits of creating an arcade-like multiplayer game, as well as the role of the Wii U and handhelds for indies.

Digitally Downloaded (DD): What’s your company and where are you based?
Santana Mishra (SM): Witch Bean is a three-person team based in Brisbane; myself, Tim Dawson and Jeff van Dyke. That’s the whole team and our strategy is to not outsourcing anything. I’m the designer on the team so I make a lot of the level designs, enemy designs weapons designs and a few light sound effects works. We’re totally self-funded, totally independent and nobody has any creative control over it so we’re just making the exact games we want to make.

DD: What is it like being an indie developer in Australia?
SM: I think it’s actually pretty tough but it’s also a massive emerging market in Australia, everyone seems to be shifting towards the indie lifestyle, especially in Brisbane where we used to have so many major studios but they have all been closing. The studio I was at, [Sega Australia] is closing. We have seen Pandemic close, THQ has closed, and because of that there is a huge number of developers that are now looking at independent development. It’s tough because there is no-one out there looking to help an indie, you just have to make a really, really good game.

DD: What were you trying to make with Assault Android Cactus?
SM: So AAC is our attempt to bring 90s era Sega games where everything was blue skies, and vibrant bright colours that are inviting and accessible into a modern environment where we have moved away from a ‘lives’ mechanic and instead implemented a unique ‘battery’ mechanic because we think it makes it more accessible to players because they can just play the game and get back up when they are knocked down. It’s helped us make a more interesting game; the arcade games were more limited and designed to make you put more coins in. We want just the best parts of the arcade gaming, where it is accessible and interesting and bright and colourful.

DD: What have you tried to bring to the dual-stick shooter genre with Assault Android Cactus?
SM: The things that we’re bringing that are new to the genre are a merge between standard twin stick shooter and bullet hell games. I’m trying to think of what to call it, perhaps organic bullet hell? Because it’s an arena shooter enemies don’t spawn in pre-scripted positions like a typical shoot-em-up, so we can’t actually have a guaranteed bullet pattern on the screen. To manage that what we have done is shifted up the way enemy attacks work to try and create a bullet hell style out of their attack patterns. So for instance a lot of enemies will fire a three shot burst, and the spawn rules will try and spawn them around the player in a semi-circle to organically create a bit of bullet hell moment. And it works in multiplayer too, being arena-based we really want to try and push that multiplayer element. 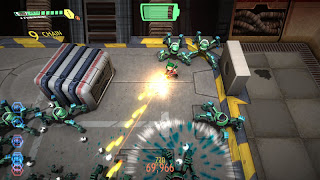 DD: And speaking of multiplayer, it’s four-player local co-op?
SM: Yep, four player local co-op. What we actually do is we scale up the number of enemies based on the number of enemies and what that gives us is a lot more of a party game feel. It’s hectic, and not quite as focused, so that anybody can pick it up and play and give it a go as long as someone is carrying the team doing a lot of damage. The reason we didn’t give the enemies more health in multiplayer was that we want the weapons to shred through the enemies and if we just scaled up the hit points that would be more difficult; we want our players to feel powerful.

DD: Did you choose local multiplayer over online because of the communication needed with a game like this?
SM: Communication is a big thing. We have some characters that have co-op style weapons. One character can drop a plasma field that creates a energy shield around a specific point in the level then everyone can get inside that shield and shoot outwards.

It’s also arcade culture; were putting people in a room like the arcade did and the N64 and Dreamcast consoles did when four controller ports happened for the first time. We’re hoping we can get that feeling on the PC.

DD: Are you only looking at a PC release at the moment?
SM: Right now it’s only for PC, PSX and Linux. We’re on Steam Greenlight so if you like us, vote for us.

DD: Looking past the initial release, would you like to release Assault Android Cactus on consoles or handhelds?
SM: We’ve been talking with Nintendo and Sony, but nothing has been set in stone. Primarily we’re still focused on the PC version. In the future I’d love to bring it to handheld. I’d lean more towards the Vita, as I own one and play it all the time I think it would be perfect for twin stick shooters because it has two analogue sticks. With phones it’s so much work required and I don’t think it will work. I’d love to see it on Vita, PS4 and the Wii U at some stage in 2014.

DD: What are your thoughts on the Wii U?
SM: I think it’s a shame that nobody is taking it seriously at the moment but I understand why there’s not enough software. The machine itself, I love the controller, it’s so nice playing typical games that don’t use the touchscreen so much. I love Nintendo’s games. I bought one at launch! I don’t think that was the best decision because I’m sure it would be cheaper by the end of the year but I’d love to put our game on it.

DD: What inspires you as a designer?
SM: Typically it’s when I look at something and I think that the design is close to flawless, there’s not a lot to improve even if it’s not ambitious. Take Super Hexagon for example, the game is flawless. You can’t do that idea better. What gets me down is when I see something that has a lot of work put into it, great art assets, great animations, and has been built by a team of 100 or 1000 people and I look at it and think, “there’s a lot of flaws in this game.” It makes me sad when I see that.