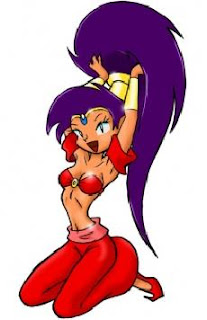 Shantae has a legend almost as powerful as the 1001 Arabian Nights that it draws inspiration from. The Game Boy Color game went through all kinds of development and then publisher hell and in the end the publisher, Capcom, was only able to shift copies to retailers by forcing them to take them when buying Resident Evil games. Or so the story goes.

Because it struggled so hard to gain traction in the market Shantae was only released in a tiny few markets and in very few numbers. As a consequence, if you’ve got a copy, congratulations! If you’re ever hard up on cash, drop it on eBay and rake in a couple of hundreds of dollars in cash.

You’ll also be able to laugh at anyone that buys the game from you at that cost because it’s now available for download for just a few dollars off the 3DS Virtual Console. So let’s get this out of the way now; the game’s worth the eShop price. It’s not even close to being worth $300+.

Coming from developers Wayforward, there’s a couple of things that we can take for granted going in, and Shantae doesn’t disappoint. The presentation is excellent, with big, nicely animated sprites and a suitably colourful and exotic environment for a game set in fantasy Arabia. The music is incredible for a console that was limited to the cheapest of MIDI tunes, and there’s a clear vision to Wayforward’s work; the progression from stage to stage exhibits a nice flow and there’s a subtlety to the game’s design that is refreshing in an industry where over the top is never enough. 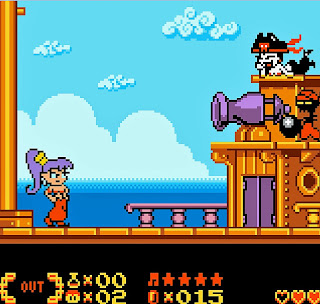 At its core fantasy Arabia (and specifically the 1001 Arabian Nights that the genre mostly draws inspiration from) is a difficult one for many of the modern gaming markets. Because the stories tend to be loaded with sexual themes and a morality that is foreign to many of the main games markets, it can be difficult for developers to build an authentic Arabian tale without offending sensibilities. Games like Prince of Persia have achieved this over the years, and so too has Shantae. There’s a sexiness and exoticness to the design and environments, but in a way that isn’t overly in the face. What’s even more impressive is that Game Boy Color games were almost never able to create characters or environments with any kind of personality, but Wayforward was ahead of the curve then as it is now and Shantae is an example of the finest design the era could offer.

At the same time, the Wayforward from a over a decade ago was not as confident and didn’t have quite the same precision in its gameplay design as it does now. Compared to the near-perfect level design and balance of the sequel, Risky’s Revenge, Shantae has major faults. Levels are far too long and repetitive, to the point where it will feel like one of those old Hanna-Barbera cartoons with the backgrounds that repeat over and over again. Enemies have a habit of popping up in a way that’s nearly impossible to avoid their attack, especially when you take into account the fact that the attack button needs to be pressed down and held to allow Shantae to run. It’s manageable, but that delay between pressing the button and activating the “run” command is a design limitation that we just don’t tolerate in modern games. 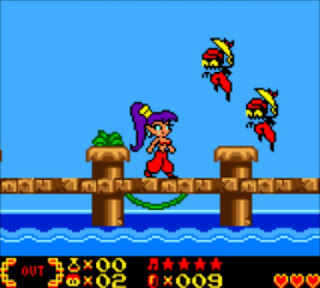 Beyond these design limitations Shantae is also a game that is genuinely difficult. That might be a good or bad thing, depending on your tolerance for pain, but we are talking challenge levels competitive with the early Mario games here. Save points are spaced at a fairly ugly distance apart, but the ability to make use of 3DS save states largely remedies this.

Ultimately it’s easy to see why Shantae is one of the most beloved Game Boy Color games amongst those few who had the opportunity to play the original version. This is a game that was well ahead of its time, and even though there are better games out there now (Wayforward has been a solid supporter of Nintendo’s download portals), this is still worth picking up for fans of retro gaming.