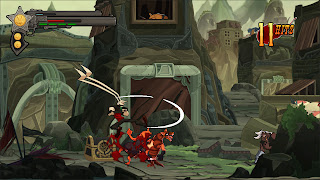 In a weird way, I miss the days of the early-to-mid 2000s. Nostalgia plays a part, yes, but in that time period the gaming community seemed a lot more forgiving, at least in my eyes. The name-calling was less volatile, consumer hate/ distrust was not at a constant fever-pitch, and many individuals were able to like games that may have had some (minor) fundamental flaws. Unfortunately, something happened when the most recent console cycle started and now the gaming community has become hyper-critical and willing to spew vitriol whether or not a developer deserves it.
Dusty Revenge reminds me of a game that would have come out in the early-to-mid 2000s. Despite having undeniable flaws, I can totally see this game being a memorable hit in that time period. The community of that era would have latched onto the art style and good parts of the gameplay while ignoring the minor design offenses. And, to be brutally honest, I feel like I have found myself in that time period, really enjoying my experience despite the critical side of me understanding that this game needs to come with a disclaimer. 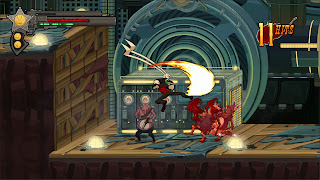 Firstly, the visual elements of Dusty Revenge are striking in a pleasing way. Characters are animated and (mostly) move with a nice consistency. Backgrounds tend to be lush while foreground objects are detailed to what I can only imagine were painstakingly high standards that the developers set themselves. The cutscenes have a dirtied and dry aesthetic, matching the outlaw-esque tone that the game’s story wants to portray. If for nothing else, I can recommend this game for its fabulous art design.
The gameplay is the secondary highlight of Dusty Revenge. While not as shining as the art of the game, the combat is still entertaining. Taking place on a completely 2D plane, the player is encouraged to chain together attacks to take out a (somewhat small) variety of enemies with heavy, light, and gun-based attacks. Dusty Revenge is very much a 2D brawler and it hits almost all of the goals of being an entertaining one. Chaining together the various combos the player can make is gratifying, enemy combinations force the player to occasionally mix up their strategies, and it all is rewarded with charging a devastating ultra move meter. While enemies can stun-lock the player and the fighting can often seem a little too one-dimension for its own good, those issues remain small and mostly unnoticeable throughout the majority of the experience. 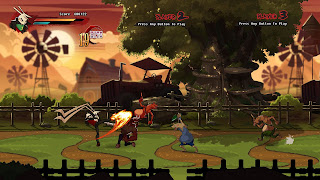 Having given hope to a nostalgic part of me, I must crush it by talking about the detrimental aspects of the game. The story is mismanaged, introducing or heavily hinting at narrative threads that will then be ignored for the remainder of the game. The platforming elements of the game also feel extremely off. The gliding mechanic triggers too soon, double jumping requires specific timing, and jumping off of climbable surfaces is counter-intuitive. The experience system in the game feels pointless, as it does not add to the experience but rather detracts from it by barring the player from learning all of the combos using their own skills before the game ends. These are all legitimate issues that do bog down the game to a significant degree.
However, even with all those issues, it is still enjoyable to play Dusty Revenge. It may not be a refined game, but it can be enjoyed by those that like non-extensive brawling games and it may remind you of an earlier time. I certainly had both the feelings of nostalgia and of being entertained.