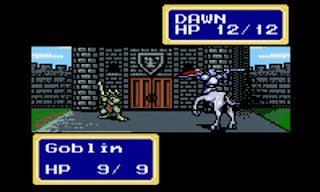 Ever since the Nintendo 3DS Virtual Console started rolling out I have been waiting (and waiting) for the classic RPGs that I loved to play on the go to start hitting the store.

Specifically of course I’m referring to the Game Boy’s Final Fantasy Legends games, but there were others, too. RPGs from a time where technical restraints meant the games couldn’t be bloated with features, and stories were so simple they could be written on the back of a napkin. There was an elegance to those games, a lack of complications that meant I could just kick back and enjoy the core experience of level grinding.

To date I have been largely unimpressed with the RPGs on the Virtual Console. Sword of Hope II was a nice deal, and roguelikes such as Dragon Crystal are always in vogue. But that’s basically been it as far as the broader RPG genre goes. 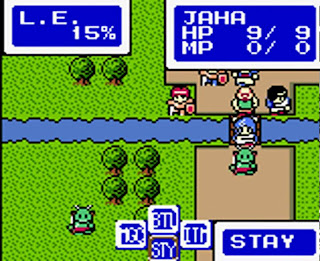 So thank the Gods for Shining Force, which takes all that oldest-of-old school tactics RPG gameplay and sticks it into an easily digestable downloadable title. It’s not going to last dozens upon dozens of hours, and on a handheld that already has the brilliant Fire Emblem Awakening I just can’t imagine anyone but the most hardcore of tactics fans getting anything out of it, but I am personally glad it’s there on the download shop.

We are of course talking about a plot which doesn’t amount to more than “evil mage threatens world. To the rescue, heroes of light!” but once you get into the game itself such silly things as plot no longer matter. What counts is that this is a tactics RPG with a surprisingly wide range of units to mess around with.

Units level up with experience. They can equip better weapons, or make use of healing items. There’s the occasional rare item that can boost a favourite unit’s statistics. All the basics are there under that delightfully pixelated art style and 8-bit chip tunes. It doesn’t do much more than that, and the enemy AI is laughably exploitable, but then it’s fun to take the tactical skill learned through the far more difficult Fire Emblem games, and cut through the enemies like a knife through butter.

Though a little hint – watch out for the enemies with the ability to cast “Blaze 3” or “Freeze 3.” Holy crap those are cruelly overpowered.

Ahem. Anyhow, I never had a Game Gear, so being able to play this game for the first time is like getting one of those retro-throwback RPGs off the app store. It’s fun, and that’s what counts with Virtual Console releases.