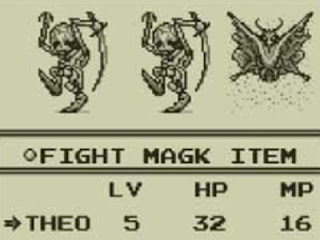 It’s hard getting into Sword of Hope 2. There’s retro, and then there’s so retro that it’s alien. With a screen that is 80 per cent made up of menus, and the tiniest, static images representing the entirety of the game’s “graphics,” Sword of Hope 2 is alien. Get past that initial impression though and it’s a game that is actually quite compelling for those of us that grew up with the genre.

It’s a bit like a classic adventure game like Zork or Myst has had some JRPG elements thrown into it. Players navigate a party of heroes through environment locations using icons that represent text commands like “go left,” “go right,” and so on. One screen you’d in a forest. Move left once and you’re at a river and bridge, move left twice more and you’re at an ancient temple. Environments can be looked at, “hit,” and a range of other simple interactions to uncover hidden passageways, treasure and generally progress the story further. 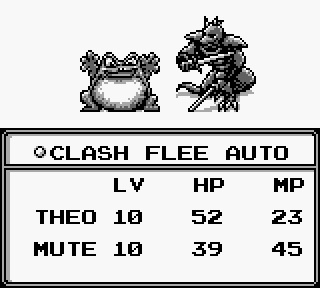 So far, so Zork. The puzzles are nowhere near as deep or engaging as your typical first-person adventure game, but as a primitive example of the genre, there is a bit of nostalgic thrill here. Then the combat starts, and suddenly Sword of Hope 2 becomes much more interesting. Combat plays out a bit like a Dragon Quest game. Players don’t see their heroes – it’s in “first person” and the monsters are arrayed in front of them. It’s all turn based, and very, very simply animated. A few graphical slashes and flashes, and one side or the other is dead.

In true retro-JRPG fashion, there’s a high encounter rate, and a lot of grinding required to make real progress. Death returns players to the start of the game, with all their equipment intact, but depending how deep you are into the game, trekking back to where you died can be a real pain. More frustrating is learning all the names and functions of spells, abilities and equipment. Sword of Hope 2, like most Game Boy RPGs, uses abbreviations for names longer than a few characters, and because this is a series that hasn’t become canon, the abbreviations make no sense without consulting the manual first. 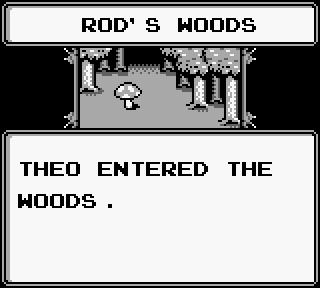 Because there is no physical menu for quick reference, this is a game you’ll need to constantly hit the “home” button on the 3DS to load up the virtual manual, just to check that the spell or item you want to use will have the desired effect. With a bit of time all these items and functions are memorised, but the learning process is clunky and inefficient.

There’s also no map. For a game that is played out by “jumping” from environment to environment, it’s relatively easy to get lost. I found myself doing the old RPG trick of pulling out some grid paper and making a manual map as I played for quick reference.

And it’s for that reason that I personally loved this game, but it should be a word of caution for most. Sword of Hope 2 isn’t just retro, it’s archaic, and while that will hold a certain charm for some, it’s going to be a slow labour for many others. With minimal plot and virtually no visuals to speak of aside from the menus there’s not really anything there to hold the attention of anyone but the most committed of JRPG fans.