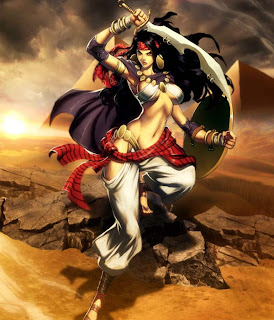 When it rains, it pours. Just last week I was praising the release of one classic JRPG on the 3DS Virtual Console after ruing the lack of its peers on the service. Not one week later another classic Game Gear JRPG has hit the service.

Defenders of Oasis might be grammatically incorrect (unless of course there is only one Oasis in the entire world), but the game itself is a whole load of fun and checks every box that you could hope for with such an old and antiquated title.

In fact, the game has a spirit of creativity that many modern JRPGs have forgotten. So often – too often – modern JRPGs rely on a very safe fantasy world. It should be based largely on European mythology with a dash of technology and magic thrown in for good measure. Or alternatively it should be some kind of Star Wars psuedo Sci-Fi fantasy world with high technology and a dash of magic thrown in for good measure. Over time the environments of our JRPGs (actually, RPGs in general) have become so homogenised that we don’t really question it even as we consume it in such numbers that risk-adverse publishers and developers don’t themselves question throwing these worlds at players. 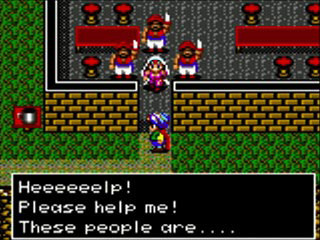 Defenders of Oasis is the kind of game that would be too risky for a modern JRPG. Set entirely within a mythical Arabia, this is a game of genies, exotic locations, sensuality and magic. It is of course conveyed through some barely distinguishable sprites and tinny 8-bit midi tunes, but the imagination is there. For anyone who has picked up and read through 1001 Arabian Nights, it’s a setting that is irresistible and all I can think while playing this is “I would give a kidney for a HD Arabian Nights RPG. As it was I needed to use my imagination to really enjoy this minimal plot and basic visual palette, but the fact that this game was able to focus my imagination is everything you want from a early-era game.

The gameplay itself doesn’t quite hold up as well as some of the other classics in the genre. As with all early-era JRPGs the random encounter rate is simply insane. There would be times where I would take five steps in a row and literally every single one of those steps was a fight. Throw in some truly mountainous difficulty spikes and this is a game that requires a lot of grinding to pad out what is a fairly short quest otherwise. 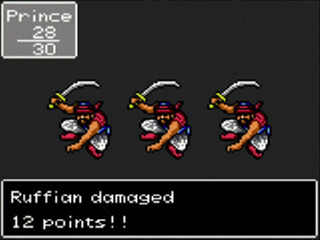 Randomness plays a too-big role in the combat itself too. Order of attack is heavily determined by the throw of virtual dice and at times a group of enemies will attack four or more times in a row. With adequate grinding this is never an immediate threat, but it does hamper progression significantly. Why? Because resources are minimal. Most of the heroes don’t have access to magic or magical healing and rely on a too-few magic point resource pool from the other heroes for support. Players are also limited to carrying nine of any one kind of healing item at a time.

Throw all that together, and I had to back out of a dungeon more than a few times, not because my heroes’ levels were too low, but rather because I simply didn’t have the resources to risk an enemy encounter where the enemies were lucky enough to get a few quick hits in before I one-hit KOed them.

This artificial lengthening to the game ground away at my patience through the running time, and I was largely grateful to see the credits roll at the end of the game. It’s not one I will ever play again, but I loved the vision in the game, and again to any developers that read this – I will seriously give a kidney if you were to create a focused Arabian fantasy JRPG.