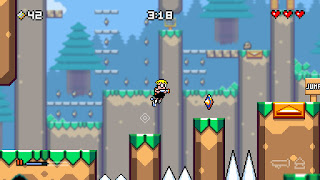 Old school platforming taken to into the modern age.

If you remember the platformers of the NES and SNES, then you already know all about Mutant Mudds Deluxe (MMD). Tricky jumps and enemies that needed to be timed to get past or vanquish were staples of the genre (like they kind of still are today), but there’s more to Renegade Kid’s dirt-blasting side-scroller than just memories.

Made in the classic style, MMD follows the adventures of Max, a young boy with a mission to scrub some Mudds from the face of the Earth. See Max was just kicking back and relaxing in his house, playing some games and having a nice day when a meteor struck nearby. Now the town is overrun with mutated mud creatures- Mutant Mudds. The only thing that can stop them? Well, basically its Max and his water cannon. And jetpack(?).

That jetpack actually adds a lot to what’s otherwise a pretty straightforward platformer. The control set is a simple affair- Max can jump, shoot and jet across large expanses. He can also just hover, thanks to his jetpack, which really comes in handy with those disappearing platforms. No, there isn’t a tonne that you can ‘do’ in this game, but the controls are rock solid and that’s a very good thing because MMD can be a tricky affair.

It’s not that it’s an overly difficult game per say, but MMD is an old school playthrough and that can be a shock for the modern gamer. I was raised on these types of games and it took me a little while to get used to it! I have to say though, to play an unapologetically classic platformer is a real treat.

MMD basically consists of traversing through the well crafted levels, picking up gold coins (sound familiar?) and getting to the finish, where you’ll find a giant gem to grab. Along the way, you’ll blast away at Mudds of all kinds. There isn’t a huge variety of enemies, but you will find plenty of airborne and land-based foes to super-soak your way through.

The graphics and sound are perfect equals to the gameplay, and by that I mean they’re both classic in their application and tons of fun. Though MMD’s looks might seem simple, there are some modern twists. First off, you can jump both into the background and the foreground at different times in th levels. 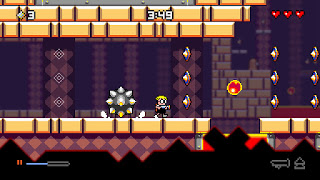 This really adds a great element of change to the usual, straight on, hop and shoot action. The Wii U GamePad, which gets sadly forgotten by most titles, actually serves as a second screen for these 3D ventures and you can get a closer look at what Max is doing in the distance just by playing on the GamePad’s built-in screen while you’re ‘zoomed out’ on the TV monitor. And of course, it should probably go without saying that you can play ‘off screen’ as well on the gamepad.

Semi-3D trickery aside though, Mutant Mudds Deluxe is kind of a breath of fresh air in a world of high-powered graphics and photo-realism. Not that I don’t enjoy those things too (because I do), but to play a game that’s an homage to the old ways of game forging is an extremely happy experience and one that more gamers should partake in.

Mutant Mudds Deluxe is a terrific game that I urge Wii U owners to at least try out. If you can get into it, it’s a true gem of the Wii U’s digital library. MMD has some great old school looks, rock solid gameplay and tons of replayability- what’s not to like?