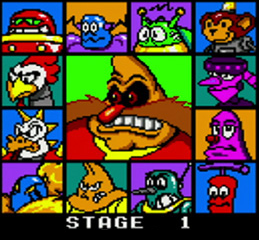 Puyo Puyo is, in this writer’s mind, the only series capable of challenging the status of Tetris as the epitome of the puzzle genre. Unfortunately, the series is criminally absent beyond Japanese shores with several key entries in the franchise such as the 20th anniversary game being entirely omitted. Considering the 3DS is region locked with regards to both its online shops and the physical cartridges, this is especially painful.
Though it lacks the cutesy Puyo Puyo branding, Dr. Robotnik’s Mean Bean Machine is in fact a game by the original developers of the series and a title that the rest of the world can appreciate. It maintains most of the core mechanics in the series and puts diabolical twist on the presentation aspect.
To the uninitiated, screenshots may seem to depict Bean Machine as another “match three” puzzler. Such poor investigative skills should be mocked, as this is a match fourpuzzler. In all seriousness, the ingenuity of Puyo Puyo is derived more from chaining together elaborate combos than attempting to play perpetually and rack up a meaty score. Still, most standard genre conventions such as attaining a game over when your beans hit the top of the screen apply here.
The game’s single player mode is designed with this in mind. Bean Machine is split into around 13 stages where you’ll compete against Dr. Robotnik’s robots in some half-hearted effort to make you believe Puyo Puyo is relevant to the Sonic the hedgehog’s universe. More importantly, this means you’re actively competing against opponents and so there is incentive to bust out combos at the earliest possible opportunity (as creating combos causes filler blocks to fall into your opponent’s play area). It’s all very fast-paced and dextrous, additionally requiring you to be spontaneous when the computer inevitably ruins one of your combo setups. 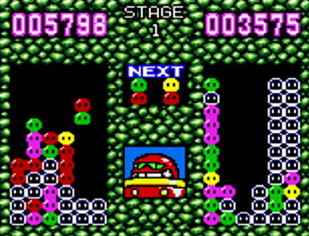 In case the 13 opponents don’t offer sufficient replay value, there’s the obligatory endless mode and a puzzle mode. The former is more useful for practice than genuine enjoyment while the latter offers some pleasant diversity through tackling various objectives.
While lacking some of the superfluous mechanics introduced in later games such as the much-criticized fever mode, this is chiefly a Puyo Puyo game. Still, neglecting to mention the presence of Eggman himself would be shameful. Though I’m sure other puzzle games have implemented this, Dr. Robotnik’s Mean Bean Machine deserves mention for its character portraits oozing with personality. As a match progresses, you get to see the expressions of your robot opponent change. Their snide grins of derision or trembling expressions of inevitable defeat are surprisingly motivating.
Throw in some catchy, darker music than the typical Puyo Puyo fare and you’ve got a game that can rest on some its own laurels rather than blatantly being designed to better appeal to foreigners. Seeing as this is the Game Gear version though, some will take issue with the lack of character dialogue prior to matches. I personally scoff at this since the lack of cheesy one-liners isn’t exactly going to get people up in arms. Besides, this is one of the better looking Game Gear games and it can be better appreciated on a system with more than two hours of battery life. The colourful graphics help further distinguish this from Tetris and give it something an edge for puzzle newcomers compared to Nintendo’s own Virtual Console title.
Here’s where Bean Machine truly excels, though: the multiplayer. While Tetris offers absolutely nothing (thanks to Nintendo’s inconsistent attempts at replicating the extra features in Virtual Console games), Bean Machine carries this mode at a cheaper price point. 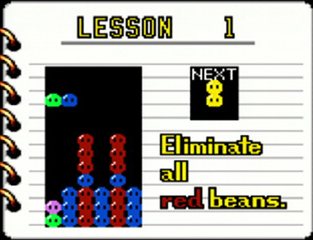 In the context of what Dr. R’s game is about though, this is more of an essential feature than it was in Tetris. To get a bit anecdotal, the amount of time I invested in this game’s basic multiplayer mode as a child at least surpasses the length of several lengthy RPGs. While I do question whether the rest of the world values it to the same extent, the multiplayer absolutely elevates this game and keeping it intact considering the paltry price was rather generous on Sega’s part. That said, the lack of download play may present something of a hurdle as both parties need to own a copy of the game to get going.
Even as the technically inferior Game Gear port, Dr. Robotnik’s Mean Bean Machine is as hopelessly addictive as it was in 1993. It’s a highly competent puzzler that should appeal to most audiences thanks to its very even-handed difficulty level. The only thing that may truly hurt is the presence of childhood-draining multiplayer.