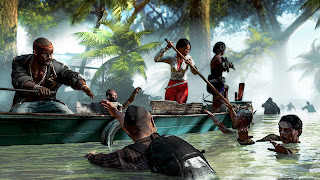 Labeling Dead Island Riptide as simply “more of the same” might sound incredibly dismissive, but that’s what it is, plain and simple. It’s a game that is lost between being a full blown sequel and an expansion pack, with enough content to rival that of the first Dead Island, without adding anything significant to the existing framework.

In fact, Riptide is perfectly comfortable with reusing art assets, graphic interfaces, and gameplay systems to the point that you’d find it hard enough telling either game apart from each other. And therein lies one of the biggest faults with Riptide. While it barely holds its ground if you distance it from its predecessor, as a follow-up to a game that became more tiresome as you played, Riptide quickly devolves into a painstakingly dull and tedious experience.

Having actually enjoyed the first Dead Island, quirks and all, it’s a shame that Techland has done little to improve the series as a whole. All the same bugs, glitches, and odd design choices are back, with a few more thrown in for good measure. While I can go on and on about the technical issues that plague Riptide, one of the more baffling design choices is the looting system. While it’s standard for a game of this genre to allow you to loot a variety of objects, from suitcases to garbage cans, the game re-populates a room with the same loot each time you exit and return, thus removing any of the excitement of rummaging around for rare materials. 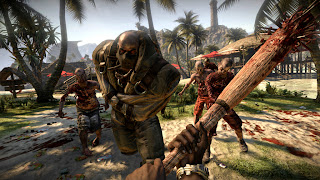 Granted, I can’t say I’m overly surprised at the overall level of quality, especially when you consider the game’s story (and I use that term generously). There wasn’t much in the way of a story in the first Dead Island, but dropping a zombie apocalypse right in the middle of a hedonistic tropical resort was enough to keep you playing. In the most uninspired way imaginable, the same group of ragtag survivors (and one new playable character) has escaped one zombie-ridden island only to get stranded on a new one in what seems like record time. This ‘new’ island will have you exploring a jungle, an old military base, and a shantytown. And unlike the first game, whose beach resort was a sprawling environment that provided a much needed sense of exploration, Riptide feels decidedly linear by comparison, making me wonder if the developers themselves didn’t realise what made the first game enjoyable. Just in case there’s a third game in this series; guys it was the exploration that kept us going.

And from there… things don’t get much better. The plot feels like a B movie, with awful dialogue, ham-fisted voice acting, and all the clichés you’d expect to see in a terrible zombie spoof (yeah but there are Aussies, and this makes the game awesome by default – ed). Instead of using this as an opportunity for some self-aware humour, Riptide takes itself way too seriously. Each character is one-dimensional, and I quickly found myself ignoring the story all together. Unfortunately, this turned my attention (or what was left of it) to the game’s quests. 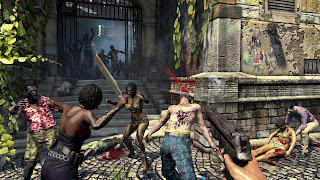 Almost every main mission and side quest in the game is a fetch quest, tasking you with heading over to a part of the island, find an item, and return with it. More often than not, the item you are seeking is being held by another person, and before you can retrieve the item for yourself, you must find another item for the person, thereby creating a fetch quest, within a fetch quest. The one noticeable addition are a handful of base-defense missions which are more than a little inspired from the zombies mode from the Call of Duty series, considering you spend your time putting barbed wire fences to keep enemies at bay.

The combat is virtually the same as the last game. You’ll use a variety of blades, blunt objects, and guns to viciously slaughter a seemingly endless number of undead. Weapons degrade over time; though you can repair and upgrade them with money found throughout the island (it’s still baffling why the island inhabitants are obsessed with money at a time like this). While the combat allows for more precise slicing and dicing than most games (it’s possible to aim for specific body parts), the movement and attacking feel clunky and sluggish. You never feel fully in control of your actions, and the stamina bar quickly depletes, hindering you from fighting off zombies when you most need it. The same basic strategy that got through the last game applies here; kick a zombie backward, hit it with something, and then back off to let my stamina refill. It was boring after the first hour, and this is a campaign that clocks in at around 15 hours…

And with that, there isn’t much more to say about Dead Island Riptide. While we might be quick to dismiss games like Assassin’s Creed or Call of Duty as being “more of the same”, Dead Island Riptide takes that mentality to a whole new level. And it’s a shame, since the first Dead Island was full of good ideas that were bogged down by sloppy execution. It’s saddening that Techland didn’t take the time to focus its efforts on evolving the series and instead opted to essentially try and hide those mistakes under a fresh coat of paint. There could come a time when we finally see a proper Dead Island sequel, but Riptide certainly isn’t it.