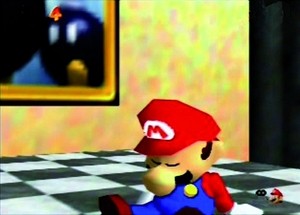 I’ve just sat down to start a play through of Fire Emblem – it’s finally out in Australia, see, and it’s one of the few Nintendo franchises that I will put aside healthy activities like eating, sleeping and washing to play.

Seriously; when I start playing a Fire Emblem game you want to stay away from me. But that’s a story for another time. Here’s the real purpose behind this little opinion piece; as I went to start playing Fire Emblem I noticed something as I turned the 3DS around to slot the game cartridge into my 3DS. There was a game already in the cartridge slot (as there always is). But I couldn’t remember ever having played that game – it was a fishing game that I must have bought on impulse and played it once before forgetting I owned it. Intrigued I loaded up the activity log. I realised that my graph from my playtime on my 3DS looks a little like one of those stock market crash graphs. The only thing putting any data into the activity log at all was a drip feed of one hour here, one hour there of Virtual Console titles like Harvest Moon.

Then I noticed that my Wii U Gamepad was covered in, literally, a layer of dust. I’m not a huge fan of the Monster Hunter and Lego games, so that probably explains my activity log on that console showing me that five minutes here or there of MiiVerse makes it my most played “game” for weeks (notwithstanding a two-hour session with Google Street View).

Over on the other consoles I’ve spent perhaps more time gaming in the past few weeks than I’ve spent concentrating on games for years. When the start of the gaming year involves Ni No Kuni, Atelier Ayesha, Hyperdimension Neptunia Victory and Persona 4 and Atelier Totori over on the Vita you’re looking at literally hundreds of hours of play. And I have been playing games for hundreds of hours this year.

Now, obviously as a games journalist I’ve read a lot of articles in recent months about a supposed lack of games to play on Nintendo’s consoles. I don’t necessary think that’s the case – even in Australia where we miss truckloads of games thanks to our obscenely expensive and utterly nuts classification system we get one or two games per console each week – but I do think that Nintendo itself is struggling with developing games for these console, through no fault of its own.

It’s my belief that when people say “no games” on Nintendo consoles they actually mean “no games Nintendo has been directly involved in,” whether publishing (Monster Hunter) or developing (Mario). That’s a lot of pressure for a single publisher to singlehandedly maintain a console in the market, and what we’ve seen on both consoles so far is limited games produced with limited resources because Nintendo is trying to do too much by itself.

So many of Nintendo’s games now are produced simply to stick something on the retail shelves. Steel Diver and Pilotwings on the DS served no purpose other than to be something for 3DS owners to play. The console picked up after the famous price drop and we saw a spate of great Nintendo games, but following the Wii U launch, the console has again quietened down. Nintendo’s Wii U games so far have mostly been games that have been quick and relatively inexpensive to produce.

Between these releases are major productions that at the games that people are clamouring for – Monster Hunter, Mario 3D Land, Fire Emblem, but it’s hard to claim that the quantity of these are equal to Nintendo at its Wii and DS heyday.

But is this Nintendo’s fault? I don’t think so. For the first time in its history Nintendo is producing HD games. This doesn’t happen overnight, and Nintendo’s game developers didn’t just wake up when the Wii U was released and magically and immediately understand how to produce HD games. Those skills require training and time to learn, and that slows down development cycles.

While these same developers learn the ropes of HD development, more resources will be dedicated to the Wii U and the 3DS will consequently feature fewer “star” Nintendo games. The company is doing a good job of spacing what it’s got out at one or two titles a month; a drip feed of gaming medicine to keep both consoles on life support while Nintendo calls in its version of Gregory House to figure out how to fix the gaming equivilant of Lupus.

That fix is coming. Once Nintendo understands how to make HD games (or increases its resources to get teams working faster) development times will be quicker. Once Nintendo’s strategy to partner with third parties to co-develop games (Fire Emblem Vs. Shin Megami Tensei) kicks in the quantity of games will pick up. Once the PlayStation 4 and Durango are released and the Wii U’s install base is effectively the biggest on the market more third parties will pay attention to the Wii U.

And once the Wii U is finally off Nintendo will put more focus back into the 3DS. People are talking about Nintendo “failing” with the Wii U. These people are wrong. The Wii U and 3DS are both certainly struggling at the moment – I’m really finding it difficult to care about either console and I know I’m not the only one in that position – but I fully expect the floodgates will be opened in the near future and those critics will feel pretty silly about themselves.

Friday 10s: The ten worst superhero games of all time