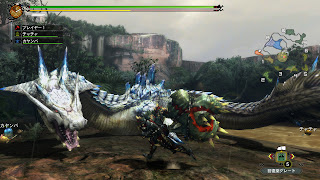 Back in 2010, Capcom released Monster Hunter Tri to the western world, eating up the social lives of hunters everywhere. Monster Hunter 3 Ultimate returns players to Moga Village, with plenty of new monsters to hunt as well. Say goodbye to that social life again.

Once again the village that is central to Monster Hunter life is under attack by large beasties that could easily kill people in one bite of their gigantic jaws. Luckily for them, you have decided to help them rid the monsters that inhabit their lands, whilst turning them into clothing and weapons. Joining you on your quests are your Shakalaka buddies Cha-Cha and newcomer Kayamba. You can also hunt online, if you have a Wii U that is, with four of your friends.

Before we get to the review of the game itself; It’s a real shame that multiplayer hasn’t been added to the 3DS version of the game for the western release. In Japan, there is a much greater chance of local play happening amongst hunters, but that often isn’t the case outside of Japan. Multiplayer is by no means necessary to complete the game and every quest from the village and Port Tanzia (the multiplayer hub) can be completed alone, and if you are alone Cha-Cha and Kayamba can join you for those multiplayer quests. But it does lose a lot of the appeal that way and the only way to take the 3DS online is clunky; if you do have the 3DS version and a Wii U, you can play online via a tool available from the eShop. Saves can also be transferred for those who own both versions. 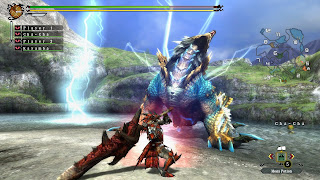 There are three types of quests that you can undertake in Monster Hunter. Gathering quests require you to find certain items within the area and deliver them. Hunt quests require you to either kill your target monster or capture them. Whilst in capture quests, using tranquilizers and traps, you must not kill the target monster, but you guess it, you need to capture him.

Each area is divided up into a number of zones. Each zone is loaded separately from one another, and as such moving between zones will show a loading screen. For many it won’t be that much of an issue, considering your fights will occur between two to three zones but there are some occasions where you can get knocked back into different zones though, which can upset the pacing of quests, if only momentarily.

Timing is an essential aspect of Monster Hunter 3 Ultimate as well. Every item and some attacks that you use take some time to execute. Using an item or attack at the wrong time can see you fainting or losing a lot of your life bar. Learning when to time actions like sharpening your weapon or to take a potion, even if that means leaving the zone, will assist you and others in the long run. 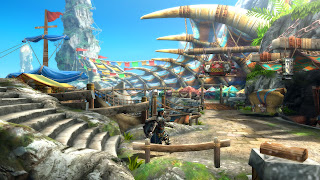 The weapons are a mixed bag and you’ll have to spend some time to figure out the one that suits your preference. There are three classes of weapons, Cut, Impact and Gunner. Cut weapons range from the slow but powerful Great Sword, to the fast, weaker Dual Swords. Impact weapons include Hammers and Hunting Horn, whilst Bows and Bowguns comprise the Gunner category. What weapon you chose also dictates where you will fight large monsters. Cutting weapons will want to attack parts of the body that can be cut off, whilst impact members will want to aim for the head in attempts to knock them out. Not all the weapons are as useful as one another, but most people should find something they’re comfortable with.

There’s a lot of information in Monster Hunter that is not presented to you on through a menu or a bar. There is one health bar in the game, which is yours. Every monster that you hunt does not display a health bar. It may seem annoying to newcomers first, but as you continue to attack, monsters will eventually show signs of weakness. They’ll drool, trip when running, be unable to breath fire or shoot electricity. It’s these moments that are truly satisfying, especially with harder quests. 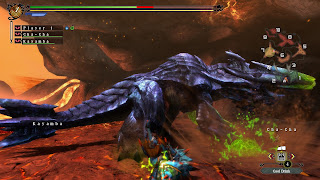 Monster Hunter 3 Ultimate is a great starting point into the series. There’s a lengthy tutorial that will cover a lot of what any newcomer needs to understand about the series. There’s still a great chance that newcomers will die on their first few hunts, especially as they struggle with the still-problematic camera and that lack of information when fighting monsters. The item system is also still ridiculously complex, and learning how to merge items together to equip yourself for the tough challenges is still a steep learning curve. But as they grow in the game, they learn the monster’s attacks, when to dodge and how they’ll have to prepare before embarking on a hunt.

Monster Hunter 3 Ultimate is also considered one of the hardest games in the series, and it only gets harder with the highest rank quests. There’s a bunch of brand new monsters and sub-species, as well as monsters that weren’t in Tri. If you’re new to the series or a veteran, you will still pour many hours into this. It’s just unfortunate that you do need to pour so many hours into it to get to the new stuff – it’s hard to recommend this game to a Monster Hunter Tri veteran. 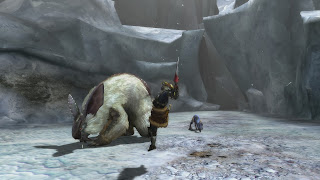 Jumping online with the Wii U; Port Tanzia is where all the multiplayer action occurs. In groups of four, players can set out on quests to improve their Hunter Rank. As your Hunter Rank increases, so does the difficulty of the quests. If you hunt with three other players, you won’t notice that much of a difficulty increase, as the monsters are designed to be taken down by four players. That being said, it’s a great challenge for hunters who think they’re up to the challenge.

Another neat feature revolves around the Guild Cards. Collecting the Guild Card of a player from multiplayer will allow you to send those players off on hunts by themselves. From gathering to hunting large monsters, for the right price you can collect the rewards without having to lift your sword.

If you’re a Monster Hunter fan, you know what you’re signing up for. A great game with a great online community. If you’re not sure if Monster Hunter is the right game for you, know that it will take you quite a few hours to begin to understand the game, and even longer for you to master it. But stick with it, you’ll be glad you did in the end. Even if you don’t have any friends afterwards.