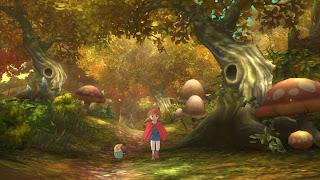 Last year, I was deeply disappointed by Kingdoms of Amalur. It was a good game, even a great one, but it fell short on the potential that a game developed by the minds of game developer Ken Rolston, storyteller R.A Salvatore, and artist Todd McFarlane.

Bringing those three nerd-cool hero artists together should have resulted in the best thing ever, but all we got was a game that showed potential as a franchise, only to have that dream crushed by the ruination of its development studio.

What does this have to do with Ni No Kuni: Wrath of the White Witch? Well, Ni No Kuni is another “dream team” collaboration. This time it brings together the JRPG development talents of the excellent Level-5, the artistic brilliance of Studio Ghibli (yes, the ones that made Spirited Away and Totoro), and a soundtrack written by Mamoru Fujisawa (otherwise known as Joe Hisaishi, and responsible for some of the greatest Studio Ghibli film music scores) and performed by the Tokyo Philharmonic Orchestra.

Unlike Kingdoms of Amalur, this dream team did more than hit its mark, and Ni No Kuni really is the best thing ever. 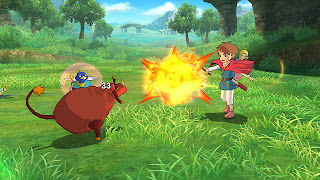 From the moment this game starts it is a game that is impossible to forget. The first half hour – which is almost entirely non-interactive cut scenes – has the same emotional impact that Final Fantasy VII spent almost its entire run-time building up to. I don’t want to ruin anything in this game because this is one that players should play without knowing what happens first, but yes, it had me in tears. As with most of Ghibli’s work, the innocence of youth combines with some very heavy-hitting adult themes to create a contrast that just demands to be taken seriously. And yet, there’s a genuine sense of humour about it, too. That contrast allows the developers to surprise and delight at every turn, and I class this game up there with the finest Disney and Studio Ghibli films in terms of the sheer quality of the narrative.

What makes the game so powerful as a game, though? It is a combination of things. The characters are so beautifully designed and animated that it’s so easy to sympathise with them – anyone who has seen a Studio Ghibli film will understand just how subtle and believable the behaviours of the characters can be with this style of animation. The dialogue is expertly written and paced just perfectly – there’s not a word of wasted dialogue to keep the story moving onwards, but by the same token the story is confident enough in itself that it knows players will want to engage with it, and it’s not so snappy that players might miss anything. That’s the skill of Level-5 in action. Studio Ghibli films are over in a couple of hours, so it was always going to require some incredible development talents to maintain interest in similar material over dozens of hours. But they pulled it off and from start to finish I was hanging on every word and moment in the game. 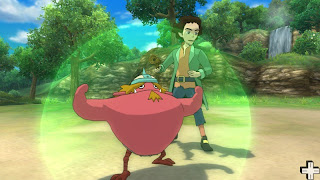 And then there’s the soundtrack. So many people will overlook this element of the game because it’s less obvious than the gorgeous art or the gameplay itself, but Ni No Kuni’s music putters along in the background creating the real emotional weight behind the game. It’s one of those soundtracks that you might not be able to whistle to once the game’s turned off, but is immediately recognisable the moment the game starts back up again. It’s the sign of a master music composer who understands his role in the game – players don’t want to be noticing the music while they’re playing the game, but they do want to feel the emotion of the game’s story, and the music’s highs and lows are there to enable them to do it.

Of course, Ni No Kuni is a game, and if it wasn’t entertaining once the dialogue and cut scenes finished up, then it wouldn’t be worth putting dozens of hours into the game. It is, of course, a very compelling gameplay system backing up the story and characters. It’s a little like Level-5’s previous games, such as Dragon Quest IX on the Nintendo 3DS or White Knight Chronicles on the PlayStation 3, in that it’s a very slow-paced, tactical system. It’s not turn-based like Dragon Quest IX was, but the skills work in much the same way and there’s plenty of time to think about what you’re doing. There’s also a Pokemon-style system thrown in there where players collect a range of familiars and control them in battle. 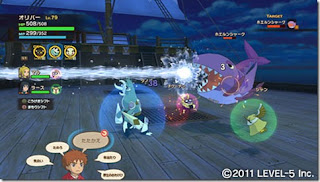 Frankly the familiars are more charming than any of the newer Pokemon character designs. Each has vastly different statistics and skills sets, and can be further customised by feeding them treats and equipping them with weapons. The hero himself, Oliver, is quite weak in combat, but is the only one who can use items and cast powerful magic. The trick here is that players can only have one familiar or Oliver in battle at any single time – the success to winning lies in swapping characters in and out to adjust to the flow of the battle (having a high-defense familiar in as the enemy unleashes a powerful attack, then swapping to a powerful attacker when the enemy is temporarily slowed after that attack). It’s a system that is relentlessly traditional, but feels new enough to be engaging even for JRPG veterans.

And later on the depth of the system hits all-new levels as new heroes join the party, each with their own roles to play out on the battlefield. Keeping on top of everything this system has to offer is surprisingly heavy work, but it’s rewarding at the same time – if for no other reason than in this game more than most you’re going to care about the characters.

Outside of battle the game is also as traditional as JRPGs come. It’s a linear story with some optional side quests for bounties or helping out townsfolk with their day-to-day problems. Each town has more powerful equipment to buy than the last, and players will use each town as a base to attack a handful of story dungeons from, before being directed to the next town. There’s some nice puzzles scattered throughout the towns and dungeons to break up the combat, too, which helps keep environments interesting and encourages players to explore. 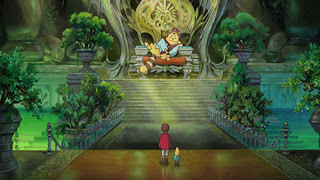 Because each new town has a radically different personality to it, and because the game’s world itself is so massive, Ni No Kuni feels like that sequel to Final Fantasy V or VI – or the Super Nintendo Dragon Quest games – that genre fans have been waiting for literally over a decade for.

What is most impressive about the game world, however, is how alive it feels. Early on in the game Oliver will pick up a magic book. Inside that book is a couple of hundred pages that need to be tracked down over the course of the adventure. Some of these pages are directly related to the game – descriptions of spells or the familiars that you can pick up, for instance. But other pages are simply stories from the world or descriptions of important locations across the world. These seemingly useless pages act like those books that you’ll find scattered across an Elder Scrolls game – they turn the world from a simple virtual environment into fantasy world with a sense of history and meaning. Taking the effort to build a backstory for the game’s world is a rarity for the JRPG genre – even the finest Final Fantasy games only hint at things happening outside of the player’s vision – and it’s something I hope comes into the genre more regularly move forwards.

Of course, on the Nintendo DS version of Ni No Kuni, this book was an actual physical book that came with the game. It’s a pity that it’s essentially a .pdf in the PS3 game, but I suspect bundling the physical book into the game would have made it prohibitively expensive for a global release.

And that’s the only fault I can find with the game; it doesn’t come with a book. Ni No Kuni is a genuine masterpiece and all-but guaranteed to be the best game released this year. That’s a big call since it’s still January, but that’s how great this game is.

Project X Zone will be coming to North America