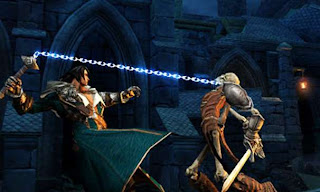 Somewhere along the line, Mirror of Fate lost me. I’m not quite sure exactly where that was, and I did manage to struggle on despite not really engaging with the experience, but there was definitely a point where this game went from being filled with potential to being a startlingly-simple and largely ineffective brawler.

Sitting here, writing this review and trying to figure out where it all went wrong is difficult, because the game’s primary fault is far too subtle to really nail down. On paper it all looks quite good – this game is one of the better uses of the 3DS’ 3D effect (which is ironic considering it’s a 2D platfomer), and the atmosphere is certainly spot-on. Freed from the cartoonish elements of most Castlevania games, Mirror of Fate is a more serious take on an epic Gothic adventure, and it all looks quite grand on the 3DS’ small screen.

Taking numerous cues from the rather spectacular PS3/ Xbox Castlevania title, Lord of Shadows, Mirror of Fate is also heavy on the action rather than the storytelling or puzzling, and is more interested in being God of War than Symphony of the Night. This too is not necessarily a bad thing; as Castlevania games after Symphony of the Night have shown, that style of game has pretty much reached its peak, but there’s a lot of innovation still going on with the God of War formula, and so there’s room for this game to be more than a shallow imitator of a series’ former glory. 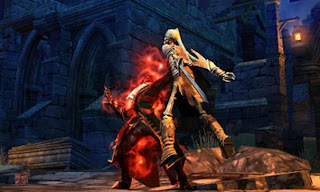 That might be the first area that Mirror of Fate goes wrong, though it’s not outright bad. Aside from taking the 3D action of God of War and narrowing it down one plane of movement, this Castlevania game doesn’t innovate. While it’s not easy, there’s a very straightforward set of parameters in which the game plays out and players will very quickly be whipping enemies around both left and right with abandon. Attacks can cover the entire screen quite easily and so players will be tested on their reflexes, but their problem solving won’t be challenged beyond working out the occasional bosses’ easily projected weaknesses; they won’t even have to figure out if an attack will land or not. Chances are that it will.

Thanks to a poor blocking system, there’s a hefty delay between pressing the button and executing the action (especially in the middle of the flow of an attack). This would be a flaw, but the developers have worked around it and the game’s combat manages to be fair because most enemies project their own attacks ages in advance. It’s not a broken combat system, but it’s not the ideal way for a combat-heavy game to handle the combat mechanics either as it feels clunky and lacks the kind of rhythm that a game like God of War, or even Ninja Gaiden 3 executes so well. There’s the odd moment where the visual swirl and cracking sound of the whip is as mesmerising as it should be, but players are usually dragged back into reality immediately afterwards when an enemy attack lands and breaks the momentum by sending the Belmont hero crashing to the ground. 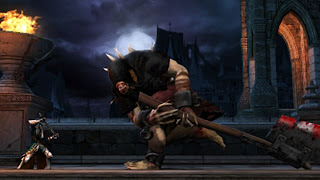 Uninspiring combat aside there isn’t much to the game. In what I can only assume is a bid to appease the fans of the “Metroidvania” Castlevania games Mirror of Fate includes some token backtracking and there are areas that players can’t reach until they’ve acquired a special ability further down the track. That’s fair enough, except that no one will be fooled by this game’s embarrassing execution of that idea – in most instances backtracking and finally accessing the previously unassailable area is pointless. Players will find a small reward like a few experience points and a little note to read that contains a couple of sentences that serve to enhance the game’s plot. Sorry, Mr. Developer, your plot is not that interesting that I wanted to track down all of these notes. In fact about halfway through I lost all motivation to try and explore at all. The game does a good job of dragging people through highlighting the main path to take, and there was just no reason to do anything that the game doesn’t want you to do.

It’s hard to explain where the apathy comes from when it comes to a game like Mirror of Fate. It’s a technically proficient game that delivers on what it promises to, without really pushing itself to do more than deliver on what’s written on the back of the box. But, while the decisions that went on in the development of this game can’t fairly be called “wrong,” I can’t rightfully say they have done a good job with building an engaging game here either.