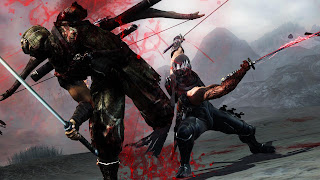 I was one of the rare few that enjoyed the original Ninja Gaiden 3. While I understood what put people off the game, there was a dynamism and intensity in the game that I hadn’t experienced before or since.

But the game was indeed a critical disaster, and impressively, in admitting that the game failed to meet expectations Tecmo Koei have gone back to the drawing board to build a new version of the game that should appease most fans of the Ninja Gaiden franchise. The irony is, of course, that in doing so I personally didn’t find the game so enjoyable.

The basic game and plot remains the same as with the original version of the game, but Tecmo Koei has changed things around so that it looks and feels more like a Ninja Gaiden game this time around. There’s alternate characters and plenty of different weapons to find and upgrade. The dynamic, swirling camera that annoyed so many people has also been replaced by something more static. It makes the game more playable when things get difficult (see below), but personally I felt that this change has also made the game significantly less cinematic. While the violence is still extreme, the camera is now panned back enough for most of it that it feels less immediate and in the face. 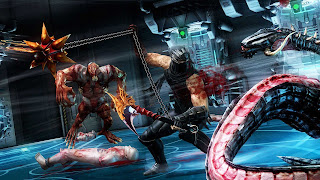 But, given the developers have ramped the difficulty right back up I guess that makes sense. While there’s the hero mode which means that the player basically can’t be defeated (auto-block is activated when they get to critical health), on any other difficulty level the enemy swarms can and will annihilate a less skilled player. Right from the very first encounter. Players who can make their way through these difficulty levels should feel like they have hit major achievements.

Thankfully, the characters control well and it’s hard to imagine that players will die too often from anything but unwise decisioning on their part. Though Razor’s Edge mandates a cautious approach to battle, the swift, elegant movement of the heroes opens up a wide range of thrilling combat strategies. A personal favourite of mine is bouncing on the heads of enemy after enemy to land smack-bang in the middle of a confused pile of them with their backs turned to me. 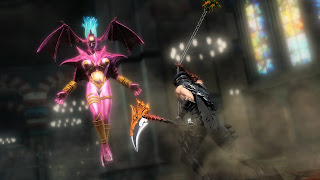 Were I to criticise the combat, however, I would say that it relies a little too heavily on enemies with projectile weapons sitting out of melee reach to force me to keep moving around. The only real way to deal with these out of reach missile soldiers is to shoot them with the bow and arrow, but the only time players will have the time to deal with them that way is after the ground forces have been largely dealt with. And so these ranged enemies will need to be dodged for the first three quarters of the battle. It’s effective in that it prevents players from sitting back and simply blocking enemies and then counter punching. With Razor’s Edge players must be mobile and create their own openings in the enemies.

But at the same time it feels a little cheap. Though it’s impossible to claim that the developers haven’t gone to great lengths to build up interesting combat scenarios, those ranged enemies do make the difficulty seem just that little bit lazy. 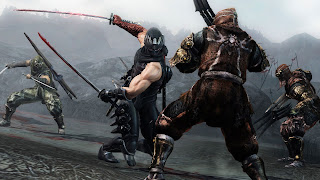 So overall Ninja Gaiden 3: Razor’s Edge is a better and more rounded game than the original attempt, and I would suggest that series fans who previously felt slighted should give this one a chance – it’s very much the entertaining game now.

I just can’t help but shake the feeling that this game was a concession to the fans, rather than the pure artistic vision that Team Ninja had gone with. In fact, I would suggest that these two games deserve to be a case study in the “games as art” debate. Razor’s Edge is more entertaining, but it’s a lesser vision. As I’ve established with previous game reviews, I am willing to overlook less entertaining quirks working their way into a game if the vision is there, and as such I did feel less fulfilled or engaged on an intellectual level when playing this “version.”