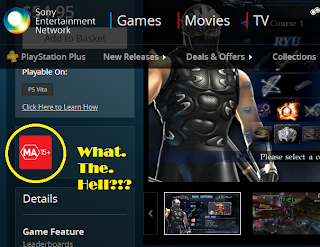 UPDATE: Sony has contacted us with the following statement:

“Please note, this was an online store listing error. This has been fixed immediately and the classification mark for the title is R18+.”

In yet another example of the breathtaking stupidity of Australia’s new R18+ age classification, the first game to score the rating – Ninja Gaiden Sigma 2 Plus on the PlayStation Vita, is also not rated R18+.

“Now hang on, how can that happen?” You ask. Simple. The retail version of the game is strictly adults-only. But don’t despair 15-year-old readers! You can pop on over to the PlayStation Network on the Vita and download exactly the same game without fear that you’ll be turned into a psychopathic killer by playing the game. It’s MA15+ on the PlayStation Network.

I really, truly hope that I don’t need to point out how insane it is that exactly the same game, with exactly the same content and exactly the same levels of violence, gore and heaving female chests can have two different age classifications for such a silly reason as one can be bought in a shop, and the other can be downloaded off a server.

One thing is clear here: If the intention of the R18+ rating is to provide better guidance to consumers about the impact of the games that they are buying, it is failing.