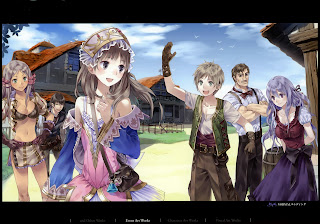 Today’s nasty little surprise that a near-innocent JRPG has been slapped with an R18+ rating by the Australian Classification Board is further proof that Australia is in many ways the poster-boy of western hypocrisy with regards to sex and violence.

I’ve written about this topic in the past and that previous article sums up my general opinion of the idea that violence is given more leeway by the censors than sexual content. I think it’s worth re-reading as part of this piece because Totori’s rating today is evidence that the hypocrisy is, if anything, getting worse.

I’d like to open this little opinion piece with a video from the PS3 version of Atelier Totori. This game was rated PG (Ages 13+) when it was released a few years back. The Vita version is exactly the same, minus a couple of new dungeons and unlocks that do not fundamentally change the theme, tone or style of the PS3 game (the following video is not ours):

Yes. There is some moments in there that would raise an eyebrow amongst the more conservative Australians with the “sex” content found in Totori. You get an impression of that from the video above. It goes back to the Japanese sense of humour, and it is not there to be taken seriously. The people that would be attracted to play the game in the first place certainly wouldn’t take it seriously; this is a game custom built for those that appreciate the Japanese gaming mindset. In other words, Atelier Totori seeks to humour, not titillate, and the vast majority of the game plays out as a standard, bloodless, happy JRPG.

Now let’s take a look at Dead Space 3 (again, the video is not ours):

Now. Dead Space 3 came into the Australian market with an MA15+ rating. All that violence, the dismemberment and the horror themes was considered to be appropriate for 15, 16 and 17 year old people in Australia, while Atelier Totori is considered dangerous for those same people (the Vita version, the PS3 version is fine).

Next, let’s have a look at the philosophy behind the classifications system:

1. Classification decisions are to give effect, as far as possible, to the following principles:
(a) adults should be able to read, hear, see and play what they want;
(b) minors should be protected from material likely to harm or disturb them;
(c) everyone should be protected from exposure to unsolicited material that they find offensive;
(d) the need to take account of community concerns about:
(i) depictions that condone or incite violence, particularly sexual violence; and
(ii) the portrayal of persons in a demeaning manner.

Let’s check this off bit by bit: By rating Atelier Totori 18+ then adults are being enabled to play what they want. That’s fine. It’s the rest of it that’s the problem. Minors are not being protected from anything with this game that would upset them. The same game has already been assessed to be appropriate to 13 year olds.

Unsolicited exposure isn’t a concern – no one is being forced to play this game. The only other philosophical point here that could possibly make sense is if Totori somehow condones or incites violence – there’s no gore in this game, and it’s certainly less bloodthirsty than Dead Space 3, or sexual violence. Totori’s extra content on the Vita, over the PlayStation 3 version is costumes, characters and extra alchemy recipes. I have played the PS3 game extensively and I can’t remember a single example of sexual violence. So, no, Totori on Vita clearly does not condone sexual violence.

So why the R18+ rating? It’s really simple. It’s the censorship board’s offensively prudish attitude that a young-looking girl who players can dress up in a bikini is somehow more dangerous to the health of the Australian people than the bloody, extreme violence of a horror game. There is no other possible answer here.

It’s worrying at the most basic level that the people who are meant to assess what is and isn’t healthy for our young people to view have a higher tolerance to extreme violence than some very lighthearted, brief, and innocent sexuality. It’s equally worrying that the R18+ marker is being wielded with absolute impunity by the censors. If just about every game is able to earn a R18+ rating for the slightest perceived offence, then the youth are going to find ways to access the material anyway, and the philosophical purpose of the rating will be rendered moot.

I’ve got no problem with the concept of age classifications, but I do take great umbrage to the idea that sex is more “dangerous” than violence and if this is ever going to work, then there needs to be a consistency to the standards.

The rating of Totori shows that the Australian censors have a very long way to go before they’re doing the right thing for Australian society. If the goal really is to protect our youth from damaging material, this R18+ rating is an utter failure.

The week’s Play-Asia specials: Art, art and the art of stealth and assassination