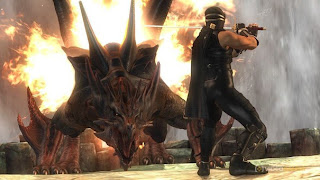 I still don’t quite understand where the R18+ rating for Ninja Gaiden Sigma 2 Plus came from. This is a game that features violence, but even with the PlayStation Vita enhancements the violence is aging quite badly. It’s more amusing like when an anvil lands on Wile E Coyote’s head than a form of violence that has any real impact to it.

This isn’t really part of a review for the game, but I have to say it in the off chance that someone from the Australian Classification Board is reading – I get that you assume that games have higher impact than movies, but this is incredibly abstracted and cartoon violence. On the relatively small Vita screen it’s barely possible to make out enemy features, let alone care that they’re being dismembered. This is a very, very soft R18+ restriction (though at least it’s not as embarrassing as rating Atelier Totori as R18+). 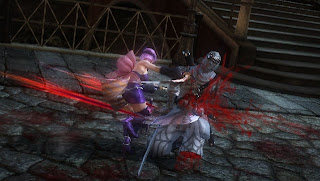 But I digress. Ninja Gaiden Sigma 2 Plus is a superb action game, even if it doesn’t do too much to break away from the previous game which is also available on the PlayStation Vita. This series has always been known for its intense difficulty level, its twist on classical Japanese mythology, and its interesting cast of heroes. That tradition continues here. Though the game includes the series’ new “hero mode” difficulty setting which basically walks players through each level, every other difficulty level is hard work and immensely rewarding as a result.

Leading man Ryu is a nimble hero as he performs classic wall jumps, weaves in and out of combat, and stylishly executes a massive range of combos. People less experienced with the series will find it difficult to survive even the first encounter, but with some practice the action becomes an elaborate dance – an exhibition of movement and grace that makes the bloodletting almost artistic to behold. Ninja Gaiden shines brightest when Ryu is surrounded by four or more enemies and when a skilled player can work through those enemies without suffering a scratch in return. It’s intense and it requires absolute precision, but it’s also empowering. 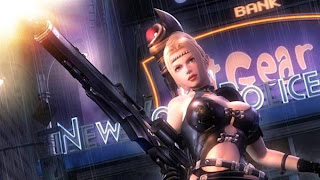 That’s the appeal of the Ninja Gaiden. It’s the supreme eye that the developers exhibited towards cinematic action and the visceral thrill in overcoming overwhelming odds to give some truly nasty enemies justice. Heroes and villains are the kind of one-dimensional character designs that the industry is thankfully starting to leave behind, but the plot and characters do just enough to justify moving from one encounter to the next.

The game also runs through its story at a breakneck pace. It’s a linear experience, but the game helpfully points players in the direction they’re meant to go next just to make sure that there is no chance in them getting lost and spending more than a few seconds of downtime. The enemies come at a fast enough rate that it’s easy to forgive the game for being so linear, it must be said, and the level settings themselves change at an incredibly rapid rate as players go from Tokyo to traditional villages into volcanoes and the underworld. There is also a wealth of different weapons and customisations to make to give players the illusion that they have some kind of control over what they’re doing. 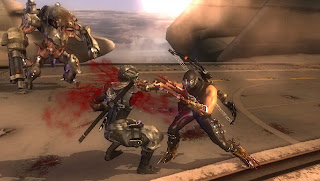 That said, what really drove me through the game was the game’s mystic themes that were never explained satisfactorily. That might sound counter-intuitive to create a compelling story to follow, but Sigma 2 Plus is filled with demonic themes, mysticism and epic conflicts that never quite come together to form anything but an ambiguous mess, and that is tantalising in its own way. There are armoured dogs that carry swords in their mouths! I don’t know why they were attacking me, or how they were trained to do so, but I was certainly encouraged to continue forward to see what the game was going to throw at me next.

Or take for another example the game’s first environment, Tokyo, which is absolutely nothing like the real-world Tokyo. Looking like it came directly from a parallel universe, there is stuff that happens in Sigma 2 Plus’ Tokyo that boggles the mind as much as it fascinates. It wouldn’t be nice to give too much away since the surprise is part of the fun, but the first boss enemy of the game is a giant statue that just appears out of nowhere and starts smashing down the city. Snippets of lore are thrown at players through item descriptions and brief cutscenes, but to make full sense of what is going on requires some thought. The overall experience is cohesive enough that I can just believe that the ambiguity was intentional and I could enjoy it as such, but boy does this game tread a fine line with narrative disaster. 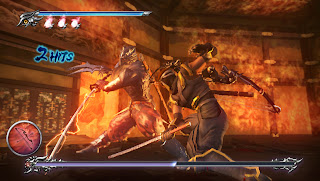 As with most HD remakes, Sigma Plus 2 looks clean, but suffers from a lack of detail. Environments are largely empty and functionally, they’re non-interactive boxes. Architecture and interior designs look positive suburban in their simplicity. The animation of the characters is superb and needed to be since this game aims to be a bloody ballet, but hacking the limbs off an enemy is looks about as real as the dismemberment of a Lego minifig. The boss design is quite nice and benefits from the crisp Vita screen, but regular enemies look like they come off a production line. In short, Sigma Plus 2 is a game from an earlier time of game development. It might still be playable, but for all the gameplay faults of Ninja Gaiden 3, it’s hard not to wish that the actual presentation of this game was up to that standard.

Outside of the main story there’s some score attack modes thrown in as a bonus, and it’s also possible to control a couple of the beautiful (and deadly) women from the series – Ayane, Momoji and Rachel. People who are coming to the series for the first time likely won’t care about these people, but for longtime fans of the franchise it’s a nice bonus.

It’s easier to recommend Ninja Gaiden Sigma Plus 2 than most remakes. That action structure remains so incredibly playable even now that it’s easy to overlook some of the more antiquated features that the industry has thankfully left behind.