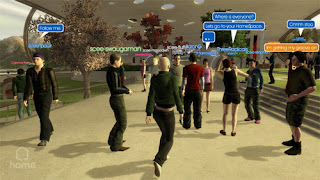 EA and its allies seem to find themselves in the center of controversy after controversy at the moment. The latest blow-up happened after Crytek – the developers behind EA-published Crysis 3 – came out and suggested that the idea of a dedicated single player experience needed to go away.

The community seems to have reacted poorly to that, though unsurprisingly the overall response lacked understanding with what the Crytek spokesperson was talking about. The company isn’t against the idea of people sitting down to play a game by themselves without the direct interference of other players (indeed, Crytek is one of the only FPS developers that still puts effort into its single player campaign). Rather, they are advocating the idea that single player games can be enhanced by the indirect involvement of other players who are also playing that same single player game.

We’re seeing more and more examples of this theory in practice. Demon’s Souls and Dark Souls really paved the way by providing a single player game that allowed players from around the world to leave messages or – at certain points – become directly but seamlessly involved in the game. There was no division between a “single player” game and a “multiplayer” one. Demon’s Souls was both at the same time. The experience of the game was enhanced as a result. While the game remained a linear, story-based, traditional adventure it was at the same time a shared experience and there was a real sense of community that was built around these games.

It’s become a game-within-a-game – an interesting example of a way that, outside of the game’s “official” rules, players have built a shared experience and a kind of lore that has deepened the overall Souls experience.

Other games have brought across similar features – ZombiU allows players to kill the zombified forms of their unlucky friends and grab their loot. For all intents and purposes, these zombies are just AI enemies, but the fact that they have an additional recognisable and personal attribution – the name – enhances the engagement with that game.

Real Racing 3, too, has no online multiplayer mode. It’s impossible to race against friends because it would be a pointless feature. Mobile phone games are generally played when players are out and about, and not in a stable, fast WiFi zone. Instead the game uses Time Shifted Multiplayer – gathering small pieces of data about other Real Racing players (aggression, lap speed) and giving AI racers those basic traits. In minimises bandwidth use while still giving players enough of a “multiplayer” experience to, again, build up a community around the game.

I’ve raced against the same girl whose profile picture is a selfie of herself in a bikini multiple times, a picture of some dude’s finger with a smilie face drawn on it, and Digitally Downloaded’s US editor, Chris (thankfully not a selfie in a bikini there) many times in Real Racing 3 races, and there’s a nice sense of familiarity to racing against “real” people and “real” Game Center names, even if it’s in a single player experience. I know this because when I take my iPad out and about (it’s a WiFi-only model), I don’t enjoy racing against random AI names with sterile profile pictures nearly as much.

Gaming is a social activity now. While I fully support the idea that people want to play single-player games, and you’ll never see me log into a multiplayer game unless I have to for review, I like the idea of developers being creative and using social elements to enhance the single player game.

Sonic Dash-es back to iOS

Atelier Meruru gets her bikini on with Vita screenshots and trailer