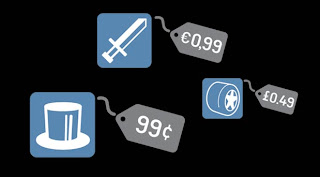 The games industry’s newest controversy: EA said that it has big plans for its games to all feature microtransations.

The response to that announcement is of course predictable; a panic about games becoming pay-to-win, gloating over statistics that suggest that Dead Space 3 – the first game to adopt this strategy – sold fewer copies than its predecessor in the UK. Never mind that the game actually broke into the charts at #1, and never mind that the entire games retail market in the UK is depressed – the gamers are of course claiming the microtransactions did it.

There’s no hard evidence to suggest that EA is adopting a “pay-to-win” model. Indeed, if you look at the history of EA microtransations on the iPhone and iPad where they’ve been a default for quite a while, microtransactions are a somewhat irritating way of speeding the game up, but by no means essential for doing well in the game.

The reality is that microtransactions will be used for largely cosmetic or convenience purposes. An extra costume or car here or there, cutting down the time to earn the best weapons there. It’s an extension of DLC when you break it down, and we’ve been getting on fine with that for a while now.

What gamers are missing here is that even if they don’t buy DLC or microtransations, their existence is indirectly benefiting them. It’s no longer a secret that current margins with games are unacceptably low – a single failed game fails a company. That’s not acceptable on a corporate level and has the effect of stifling creativity – no publisher is going to greenlight a project unless it’s a safely profitable one.

For the games industry to be healthy then some margin needs to come back into it. That means making more money. Unfortunately for games publishers, there’s a limited few options when it comes to earning revenue. They could bump up the prices of new games, but gamers have made it clear that they already consider a full-priced game expensive and raising the prices further will simply be to the benefit of the second hand market.

So instead the publishers have realised that earning additional money off existing games is the wise way to go. Keep the retail price the same, but offer the 5-10 per cent of players who are interested extra, optional, content for download. That DLC/ microtransaction money essentially subsidises the cost of the retail game, to everyone’s benefit.

I know that I, personally, am more happy with the fact that I didn’t have to pay an inflated price for Dead Space 3. That game wasn’t that engaging to me, and so the $50 (US) asking price was about my limit. I didn’t need to buy the microtransactions, and I’m glad I wouldn’t need to spend $70 on it.

Meanwhile I love Dead or Alive 5 and I don’t consider the fact I’ve spent more on the DLC than the actual game a waste of money in the slightest.

This is a much more flexible payment model that companies like EA are venturing into now, and in the longer term, the healthier these publishers are on the bottom line, the more games we’re going to get, and the more creative those games are going to be. It’s a win for everyone concerned.

Just don’t buy the DLC or microtransactions you’re not interested in. They’re never going to be mandatory, so it’s a bit pointless getting upset over them.

Why do gamers fear change?