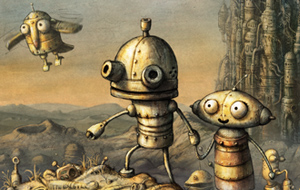 These are all things we knew already, but Machinarium is kind enough to come out of the far gone reaches of 2009 and remind us (along with this year’s Journey, of course) that this is a medium just as capable of telling heartfelt, character-driven stories as any other.

One of the great triumphs of Machinarium is in the way it effortlessly elicits fantasy and wonder despite it being a game that goes to great lengths to depict the mundane. The art direction recalls Dickensian Victorian squalor, with washed out, rusty colours making up the extent of its pallet. The puzzles we must solve (using the tried-and-true point-and-click method) are based on using mundane items, like toilet paper or a dusty rag doll, or even something as simple as a piece of string.

The lives of everyone you meet in this dreary, run-down land are boring and repetitive; most everyone just sits around wishing they were doing something else. And yet nearly every one of these wordless androids possesses more character and life than any resident of the technically more human realm of Skyrim, thanks to the masterful use of a far-too-often neglected tool: animation. 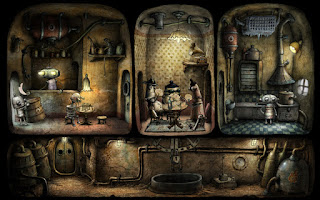 In Machinarium, animation is everything. It is the way the characters’ emotions are expressed, personalities are defined, and our attachments with them are formed. (It is also working alongside the meticulously detailed backgrounds, often the way that the solutions to puzzles present themselves.)

You see, despite it being a “cartoony” game that takes place in an impossible setting, the characters and their motivations often make more logical human sense than those of a character in a blockbuster game. I never knew the protagonist’s name in Machinarium, but he felt more alive to me than Detective Cole Phelps, who had a face that looked human and a body that moved in a human way, but a personality that didn’t make sense.

Which brings us to another point: with so many games wanting their protagonists to be reflections of the player (choosing our own name, navigating dialogue branches, choosing whether or not we’ll cut off our finger) it is a uniquely compelling thing to play a game in which our protagonist’s personality is already defined – his motives unclear to us and his relationships to other robots a compelling mystery. There are many puzzles to solve in Machinarium, but the most important one is who our protagonist is and what he’s after, and why. 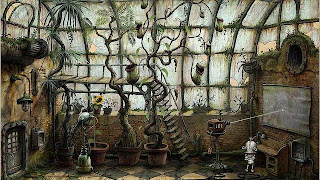 And so the game is sort of a study in contrasts: art direction that is exciting in the way it depicts unexciting things; puzzles that are fun despite using items that are not; robots who act more human than most human video game characters, and a soundtrack that is barely there to begin with, yet would ruin the game were it completely absent. You will not be humming the tunes found in Machinarium, but you will probably never forget what it sounds like and how it made you feel.

If you were to look at the screenshots, you might imagine the game sounding quite a bit like Professor Layton, with dreary accordions and lonely Victorian cellos colouring the European steam-punk landscape, though the reality is something more akin to the music of Boards of Canada or that Radiohead song “Treefingers” – chilly, transportive electronica that offers just a sliver of whimsy through a thick fog of gloom. It sounds like the game looks yet doesn’t tell us how to feel, which is exactly what a good soundtrack should do.

I didn’t even get to mention the ingenious way the game is constantly adjusting the size of the screen to create a sense of claustrophobia or agoraphobia depending on the moment, or the number of brain-bending puzzles that involve combining a number a seemingly pointless items into hilarious contraptions. Or, for that matter, that for a game that is often atmospherically glum, it is often laugh-out-loud funny. I will, however, mention this: to miss out on Machinarium is to miss out on one of the truly great games of the past ten years, and one of the strongest examples of game-storytelling the medium has to offer.

Games journalism; a manifesto of what it could be and should be