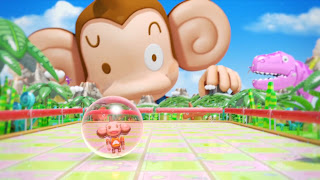 SEGA’s Monkey Ball series has had a less-than-stellar track record. The original released right back on the Gamecube were bona fide hits with some incredibly difficult single player action and some incredibly addictive multiplayer modes.

The appeal was obvious from the outset – Monkey Ball is at heart a digital version of the classic game of Labyrinth, where players need to manoeuvre a ball around a maze by tilting the maze itself. It’s compelling – that’s why it has been around for so long.

Sadly the Monkey Ball series quickly slipped into mediocrity. From an ill-informed idea to take the precise mechanics allowed by analogue sticks and shove them awkwardly into a terrible-looking Game Boy Advance title, to the insane idea to stick a plot into a Wii game, SEGA trashed the Monkey Ball brand by taking the focus away from why people played it in the first place. 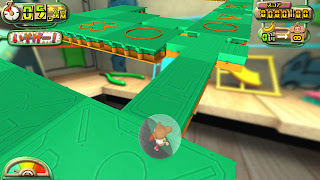 Things got even worse with the poorly-realised gyro gimmick on the iPad game and, worst of all, the horrible implementation of the Wii balance board. Through this all the only consistent amongst the series has been a general lowering of challenge and an over-reliance on silly gimmicks.

The recent 3DS launch title didn’t fare much better – failing to realise that the speed of the game makes the 3D effect very uncomfortable. With the Vita, however, the series has finally taken a baby step back into form.

It’s largely gimmick-free, and that’s a genuinely good thing. There’s gyro controls for those crazy enough to enjoy them, but there’s also the option to use the Vita’s control stick. While the small size of that control stick means it’s not the perfect input method, it’s possible to get good enough at the game to work through the harder levels this way. 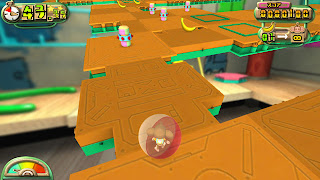 By “harder levels,” it’s worth noting that this Monkey Ball has real bite to it, too. Perhaps not quite as obsessively difficult as the Gamecube original, but close enough that there’s a real sense of achievement to this game. Traps and hazards are placed in the worst possible spots, platforms quickly become barely more than a few inches wide. Continues are also in very limited supply which means that in the more difficult areas you’re going to need to clear dozens of levels with very little room for error.

The main game is complemented by a range of minigames; another staple of the Monkey Ball brand. Unfortunately, while the minigames themselves include the perennially-popular hand gliding and ten pin bowling, these games were built with multiplayer in mind, and there are just not enough Vitas out there to make multiplayer an easy affair to organise. In other words a good half the value of the Monkey Ball series is rendered pretty useless because of the limited local multiplayer value of the hardware it’s on. 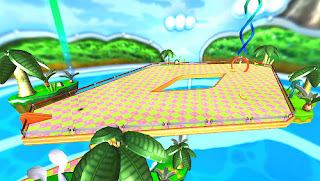 On the plus side there is one new gimmick that makes up for the limited single player appeal of the party games. It’s possible to take a photo using the Vita’s cameras, and the game will render the photo into an abstract level equivalent of the photo. The association between the levels created and the photo are vague at best, and due to the random nature of layouts and traps they’re nowhere near as compelling as the main game’s levels, but they are fun to play with, and it’s possible to save your favourites. It’s also possible to upload them to a server and then share a code so friends can download and play your levels, but this is such a clunky system that, when we have games like LittleBigPlanet on the Vita, I can’t see a user-generated community springing up around this game.

It’s also worth noting that for Monkey Ball veterans like myself, there is a disappointing range of level reuse from previous games in the series. They’re often genuinely classic level design, and will surely delight less frequent Monkey Ball players, but to me it just highlights that the series has become truly budget, relying more on churn and a niche fan base than any real originality.

But that said, this is the first handheld Monkey Ball with console-quality production values, and I love that it’s largely done away with the useless gimmicks to get back to the challenging core that attracted me in the first place. Good form, and another niche classic to add to the Vita download list.

Your next PSN game is on us (new Frequent Flyer reward!)