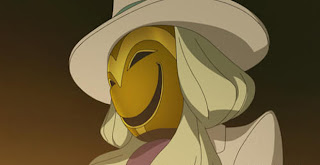 If there was any game that the 3D effect of the 3DS could mess up, I was worried that it would be Professor Layton.

What made the DS games such a joy to play was the impeccable 2D animation, character art, and cutscenes that looked like they could have been taken directly from an French animated film. The simple idea of adding depth layers to those cut scenes and taking the gorgeous character art and wrapping it around 3D models almost felt like blasphemy as I opened up the box.

But I need not have worried; Layton’s first 3D jaunt is in terms of presentation absolutely breathtaking. Enough so that not once did I feel the need to reach for the 3D slider to switch it off. The story and the locales of the Miracle Mask are charming and hugely engaging, the characters are unique and vivid and the world brims with energy and a tantalising dash of mystery. It’s a little predictable – especially if you have played any of the previous Layton games – but just as the Agatha Christie stories are page turners, Miracle Mask is the gaming equivalent. In fact, a few times my battery started flashing red for “death imminent” and I hadn’t even realised I’d been playing so long. 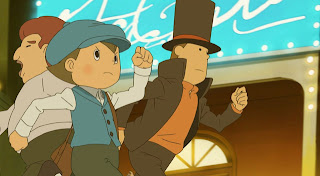 The additional prize in playing this game is that is takes great strides in fleshing out the character of Professor Layton himself. This game actually has flashbacks to Layton’s youth and given that he’s one of the more interesting characters to emerge in the past few years it’s really great to be able to delve into his past. Even if the fact that Layton in his youth does not wear a hat disturbed me a little. It’s as against character as James Bond drinking beer. But in this upside-down world James Bond now does drink beer, and Layton was not always the hat-wearing gentlemen we all love.

That digression aside, I need not have worried about the presentation of Miracle Mask going in, but I should have been worried about the core gameplay mechanic, the puzzles. I’ve got to say, having worked through all of the Layton games, these puzzles are now quite stale. They’re almost universally variations on previous puzzles from earlier games in the series. This is perhaps not surprising given how many puzzles each game has, but couple the lack of ‘newness’ with the plentiful hint coins that the game hidden within easy reach in Miracle Masks’ environments, and the end result is a game that is barely a challenge. 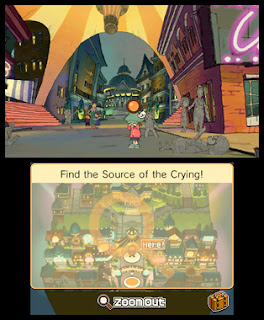 That is always the trap with logic puzzles and games built around them; once you have the ‘knack’ for them they stop being mentally stimulating, which is really the entire reason you’re playing the games in the first place. While Miracle Mask had one or two that temporarily stumped me, for the most part this was a game I was cruising through, and I’m by no means an expert in puzzle games.

That’s not the only flaw in this jewel either. For a game that is nominally based on the point-and-click adventure genre, it’s also disappointing to see such a linear experience in Miracle Mask. It would have been nice for the environments themselves to throw up some challenges, but no, the majority of the game remains on course with the previous games in the series – move from point A to B as the narrative tells you to and solve some puzzles along the way. The puzzles are also often unrelated to the actual game; tapping on a character will pull up a dialogue along the lines of “Hey it’s a lovely day today! It makes me think about this puzzle!” and the puzzle will be something along the lines of figuring out which ingredients to throw into a cake mix.

It would have been nice for the puzzles to be worked into the actual narrative. As it stands Miracle Mask is a stunning animated story AND a sequence of well-designed but generic puzzles. It’s like watching TV and playing crosswords separately on the iPad. Both are great fun, but the real magic would have been in sticking the two together somehow.

None of this will be surprising to people who have played previous Layton games; they have always been puzzle books with a plot thrown around them, but as with so many franchises now it would be nice to see some innovation coming in to the series. There’s additional downloadable puzzles (one per day for the next year), and that does add substantially to the game’s longevity, and there’s some ace minigames thrown in for a bit of variety. The highlight of these is an adorable minigame where you’ll need to teach a cute lil’ bunny rabbit a range of tricks and then have him perform in a range of theatre plays.

It’s difficult to outright criticise Professor Layton for playing safe when it really is the very best of its genre, so I won’t. The story is engaging, Layton is a great character and the presentation values are unparalleled. The puzzles might be comfortably familiar now, even easy, but that fact just makes Layton like a tub of honeycomb icecream in bed with The Avengers playing on the TV – the perfect way to unwind after a hard day’s work.

How Nintendo could improve its eShop success