Sundays are meant to be lazy days. Spending time with family and friends, going to see the latest release at the cinema, or even just relaxing and catching up on your (likely) ever-growing backlog of games, these are the things we do on Sundays too. But lately, there’s another thing that we find ourselves doing on Sundays: diggin’ for hidden gems on the iOS Marketplace.

Here at Digitally Downloaded, our goal is to put great games in the palms of your hands to enjoy and while there’s absolutely no way that we could review every single title that releases on the marketplace, today we’re going to let you in on a few little gems that we find to be well worth their weight in gold. Yes, we did say “gold,” because if you want to find the best enjoyment on the marketplace, then you’re going to pay for it, just like any other premium form of digital entertainment – unless it’s on sale, or one of the few wildcard free titles, of course.
Cytus ($1.99 USD) 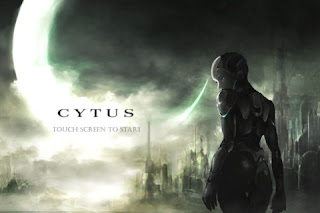 Cytus is one of the most aesthetically pleasing music games that you’ll likely ever lay eyes upon. From the dark opening that finds an android staring off into a gloomy futuristic wasteland above an eerie Japanese Trance track; you’ll know you’ve found a quality title as soon as you boot the game up.

Featuring a mix of 26 songs and 56 variations, from well-known artist/composers around the world, the soundtrack of J-Pop, Hardcore, Jazz, Trance, Drum ‘N Bass, etc., is absolutely fantastic. While the Asian soundtrack might not be known to the majority of English speaking players, it only plays further into the game’s strange atmosphere.
Using a tap control scheme, that’s not unlike what’s found in the brilliant Theatrhythmn Final Fantasy (3DS), you’ll tap and slide your way to victory with your fingers here.  The notes bubble up from the dark backgrounds and when touched they bloom into a brilliant colouration of metallic chromatisms. In motion, it’s as if the notes are bubbling straight from the liquid crystal display (if you’re playing on an older iOS device, of course) of your iOS device, which are indeed alien-like themselves.
Rayark Inc. has fully optimized Cytus for iOS devices and they’ve executed it brilliantly. Packed full of options and songs to customize the gameplay to your preferences, Cytus isn’t just worthy of its (small) asking price, it’s worthy of a premium retail price as well. There might not be a desert in Japan, but if there was, this would be its “diamond in the rough.” 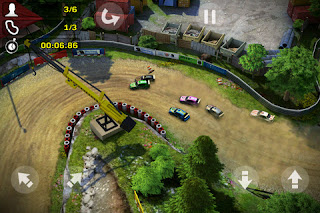 Top down racing games might not be anything new, but they’ve acquired a large fanbase over the years. If you fall into this camp, then Polorbit’s drift-heavy racing found in Reckless Racing 2 is definitely for you.

Improving on its sequel in nearly every facet, the racing here has been refined to such a high polish that you can’t help but grin is delight when playing it. The cars drift perfectly and coupled with the excellent track design (and controls) allows you to keep your cars on the edge of control at all times. With five control options available, there’s sure to be one to fit your desires, but we preferred the standard virtual button method, which (surprisingly) works extremely well here.
What sets Reckless Racing 2 above the rest is the amount of gameplay modes and options though. The main Career Mode features a ton of events that keep you constantly upgrading/purchasing new vehicles to qualify for the higher racing tiers as you progress further into it. With every upgrade, you’ll actually feel a difference in your vehicle’s performance – a slow buggy becomes a blazing fast, tight-gripping Outlaw car fully upgraded. Also, each vehicle handles differently and because of this, the desire to own/upgrade them all kicks in immediately. Fleshing out the modes, the Arcade Mode brings 40 pre-defined challenges along with it and the Single Event Mode allows you compete against your friends’ leaderboard times in a full array of modes/challenges.
Fantastic visuals and an awesome rockin’ soundtrack are only the icing on the cake for this Reckless Racing 2. Not only does it stand on the podium with the recent PSN/PS Vita smash hit, MotorStorm RC, but it stands above it – without the need for buttons. With some of the best drift mechanics we’ve ever seen and enough content to keep you busy for 15+ hours, let’s just be frank here: don’t let this excellent title race you by!

Hands on with Wii U: In reality it’s a bit of a gimmick