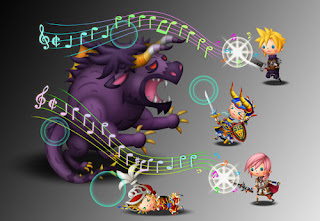 I’m in the middle of writing a review for Theatrhythm for Otaku Gaming, but I feel compelled to write about it here as well, because, frankly, this game has restored my faith in gaming.

That faith had been waning – to me, the games industry has lost a great deal of its magic. When I was a child, there were two things that were “magic” to me; Disney, and the games industry via Nintendo and Square Enix. Those three companies, specifically, were able to delight my imagination like nothing else.

I was fortunate enough that when I was in Japan a few years back I went to both Disneyland (and Disney Sea), the Square Enix shop and even Ludia’s Bar – the Dragon Quest-themed pub. The difference between the two experiences my relationship to them was shocking. I had a lot of fun wandering around the Square Enix shop, and I bought a whole heap of stuff. Meanwhile, while mainstream Disney has lost a lot of its appeal to me, jumping on board the “It’s a Small World” ride, and watching the evening light parade was a genuine nostalgic trip back to my childhood.

I came back to Australia with a lot of stuff from the Square Enix shop, but the Disney experience impacted me far more.

And I think that’s been the essential failing of the games industry for me – it’s become too transaction-based. I still enjoy games, some (like Square Enix’s own Nier) I absolutely love, but it still feels like a business deal – those guys are making a game to sell to me so I can be entertained.

The recent E3 conference just backed that impression up for me. Here is an industry that is not so much interested in making great games, but in selling great games. Everything in development (in the AAA-grade game space) is being made to hit significant numbers, and so the experiences are conforming to formulas and safe, proven ideas.

It’s still entertaining, but it lacks soul. And so in turn, by-and-large the industry is also one that I (obviously) am entertained by, but it lacks “the magic.” 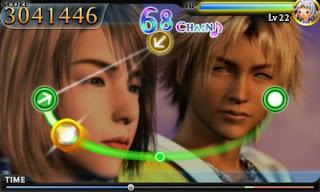 Then I started playing Theatrhythm.

The first Final Fantasy game I ever played was IV, so my first point of call was the music from that game. I had shivers of nostalgia. Then I headed over to Final Fantasy X’s music, which included the hauntingly-beautiful pool scene, and I’ll not lie, I teared up. Final Fantasy XIII’s music reminded me that even at its weakest, the Final Fantasy series stays true to production values.

And I remembered why games can be magical. Music is a primal force, and this series of games has been a part of my life for a good 15 years now. To be experiencing a game that is built from ground-up to showcase nothing but the music is heart warming.

But, more importantly, as fan service goes, Theatrhythm is one of those rare games that is a love letter to the fans. It’s not a big-budget game, it’s filled with subtle, cute, references to the games in the series, and it’s not even much of a game – it’s rather easy and the RPG elements are more to humour the fans than to add anything to the game. This is a game to be experienced and charmed by, not to play.

With no violence, no sex, no bad language, and something as simple as 70 pieces or orchestral music, Square Enix has brought the magic back to gaming.

So, thank you, Square Enix.

Van Helsing trailer is looking sharp as a stake