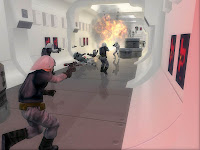 What exactly First Assault is we’re not sure, but Star Wars fans are definitely going to have something new to play on Xbox Live.

Don’t get too excited just yet, because there’s absolutely nothing to go on at the moment except the box art. And it’s pretty clear that Lucasarts wasn’t planning on a reveal for First Assault just yet.

A domain registry first appeared for the mystery title back in August and just the other day a ‘pack shot’ of the game was discovered on Xbox.com by NeoGAF users and posted up to the site. That image has since been taken down and the link to Xbox.com now just shows a generic XBLA cover image- no Star Wars in sight.

I did get a look at the artwork (which you can view too, by heading here on IGN) and it shows Stormtroopers squaring off against what looks like Rebel (Endor style) troops in some kind of low-tech city center. That alone makes me smile as an old school Star Wars fan; just knowing that the game will be based on the original set of films is great news.

Could this be some kind of Battlefront successor though? Even though there’s nothing to tell us that, there is quite a bit of speculation swirling around the fan base as to that end. We shall see I suppose- either way, we’ll have more for you as any official announcements are made.

Screen shown is from Star Wars Battlefront II. BTW, can we have another one of those Lucasarts?

EB World Expo – a tale of a wonderful gaming community