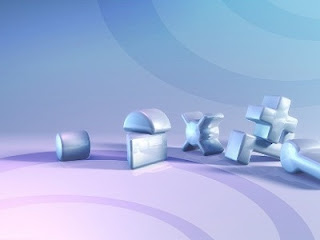 The eShop is starting to dangerously veer the same way that DSiWare did. It’s filling up with premium-priced minigames and second tier-genres. As good as the likes of Zen Pinball and Pushmo are, to date the only real game that could be realistically compared to a retail release is Nintendo’s own Dillon’s Rolling Western, and that’s no more than a tower defence game once you strip down the pretty visuals.

Art of Balance isn’t going to reverse the trend, but like much of DSiWare and the other eShop games, it’s a good way to kill a weekend or two. This is a simple physics puzzler with some nice presentation, and not much more than that. SpeedThru manages to be a more compelling downloadable 3D puzzle game, but this one gets the edge in terms of raw content.

There’s no less than 200 puzzles in Art of Balance, and the difficulty curve swings nicely in the game’s favour. Later levels will require many attempts to nail. And what are you, the player, trying to nail exactly? Balancing stuff is what. You’re got to love self-descriptive game titles. 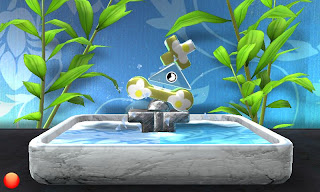 In each level there is a variety of objects of varying shapes. The goal is to stack these shapes – Jenga-like – on top on one other while keeping the weights and proportions balanced. Stack too much on one side and the whole tower will topple into the water beneath the playing field, failing the level and requiring a restart. Once all the objects are stacked, a three-second timer will start. If it counts down successfully then it’s a succeeded level. It’s possible for the counter to hit the three second mark as the tower is toppling and about to hit the water. After ten or more attempts at the level, finally succeeding with just a few pixels to spare is a bit of a thrill.

In addition to the basic game there’s an endless mode which tosses random levels at players until they fail three times. Each successful level earns points, and the game tracks the top five scores (though no online leaderboards unfortunately). 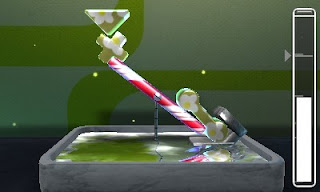 The in-game achievements give players something to aim for beyond completing all 200 puzzles, so there’s a fair bit in there for completionists. The presentation is very relaxing and zen, too, which makes the game the perfect way to unwind after a long day in the office.

The problem with the game is that while there’s a lot of content, it does a shocking job of keeping the gameplay varied. There’s a lot of repetition in these levels, and cutting the range in half to remove that repetition would have helped keep the game from feeling like a grind.

It’s also not a game built for 3D (the original Art of Balance was WiiWare), so the 3D adds nothing to the experience. In that context charging $Aus10.50 for it, when this is the kind of game that goes for $0.99 on the iOS app stores, feels a touch on the expensive side. Again removing half the content and charging half as much would have helped people come to terms with the purchase.

All said though, this is a fun little game that’s easy on the eyes and checks the main priority for a puzzle game: it offers a challenge. There’s nothing wrong with how it controls or plays, so for puzzle fans it’s a safe bet, even if it doesn’t do enough to be appealing to a broader audience.