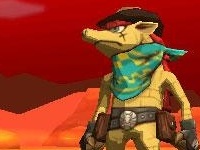 The tower defence star is fading. Thanks to an inundation of games on every download platform (especially iOS), there’s already a few thousand cheap, reasonably good quality examples of the genre out there and with little innovation, it’s all starting to become a bit stale.

So when a new tower defence game is releases at an absolute premium price, it needs to be really spectacular to stand out from the pack. Dillon’s Rolling Western on the Nintendo eShop is one of the most expensive games on the platform, and while it does try and mix up the basic tower defence formula, it is ultimately a very average game.

The basic concept of the game doesn’t break from the tower defence norm. There’s a town that is being assaulted by waves of enemies (rock things). Littered across the map are spots where towers can be built and upgraded. These towers can also be attacked by enemies, but they’re usually good to take down a few first, which in turn saves the town from the enemy’s wrath.

Where Dillon’s Rolling Western stands out is that, rather than the genre’s typical top-down camera that gives you an overview of the whole map, here you’re in direct control of Dillon, with a third person camera. Between waves of enemies, Dillion needs to roam the countryside to collect objects critical to the town’s continued survival, and upgrade the defensive towers around its perimeter. 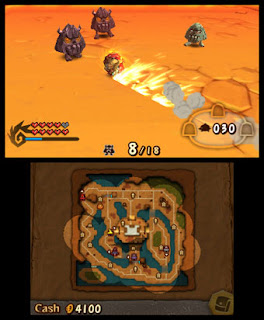 To upgrade towers you need to move over to them and manually enter them. Dillon is also able to attack enemies. When he encounters one moving towards the town, the game switches to a RPG-style action battle arena until all the enemies are defeated. The catch is that while that battling is going on, the other enemies continue their attack, meaning you need to be strategic about which enemies to personally take on, and which to allow the towers to fight off.

To make things even more interesting, there’s a number of optional quests to complete (of the “defeat XXXX” enemies or “fetch YYYY” variety), with financial rewards for successfully completing them, but financial penalties for failing to. In all it’s an interesting setup that provides players with plenty of objectives to keep an eye on, and keeps things varied just enough to remain interesting.

Where the game falls down is in the execution. It’s entirely touch screen controlled. To get Dillon rolling (and his walking pace is glacial to encourage you to roll around), you need to swipe the touch screen with a regular rhythm. To attack enemy rock monsters, you need to swipe down on the touch screen, then hold it, building up power before releasing Dillon, rubber band style, into the enemy. Here’s the big thing; it’s twitchy and uncomfortable to be precise about who you want to attack. Couple that with the fact that the combat is far too simple to be engaging, and you’re left with a game that, while on the surface quite varied, starts to look too shallow for its own good after a while.

There are 10 maps to play through, each with their own town to defend from a few waves of enemies. This is quite a lot of gameplay in terms of raw hours, but what lets it down is how bland those environments are. They’re little more than empty environments with a basic colour theme. There’s few interesting things to see or do, and the game has to force players to explore, by placing the good stuff (the mines that provide precious ores and gems) in random places before each wave. 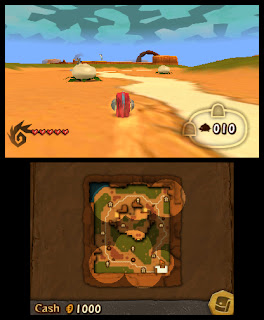 Dillon himself also has a surprising lack of character for a Nintendo game. You get the impression playing this game that he was originally slated to star in a “real” game, as there’s been some work put into his design, but early on his game was rejected. Later Nintendo needed a character to star in a downloadable game, so resurrected his character art but didn’t bother doing any work on his personality. I wouldn’t expect Dillon to be a selectable character in the next Smash Brothers.

While there’s only a few small control errors in the game’s combat, Dillon’s Rolling Western is a very average tower defence game, with far too many limits to justify being one of the most expensive games in the genre. There’s some brilliant eShop games available for download already; indeed this is a service that is doing a good job of offering quality over quantity. And as such, this game is right at the back of the pack.

Sega teases next Dreamcast port for PSN and XBLA