In SpeedThru: Potzol’s Puzzle, a spiritual sequel to the WiiWare’s ThruSpace, Nintendo has found a new action puzzle franchise with some real legs. A manic and intelligent game, SpeedThru’s gameplay makes it a natural fit for a 3D console and for the most part it gets things right.

The basic idea of the game is to fit a Tetris-style block through gaps in walls. The block always travels towards the wall and players need to flip and rotate it to slip it through the gaps. Upping the challenge is the hearts that are placed in those gaps – often in awkward positions. Players need to collect these as they act as the game’s scoring system, but rotating the block to collect them all and earn those end-of-level gold medals quickly becomes a real challenge.

Further compounding the challenge level is the environments which sometimes act to create barriers or traps for unwary players, and a time limit which forces players to try and speed things along. A press of the 3DS’ left bumper button will give the puzzle piece a speed boost and using that is required to succeed at the more stringent time limits. 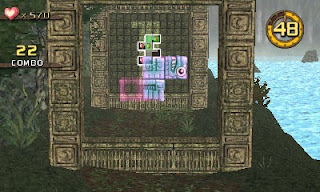 Not that Potzol moves slowly by itself. This is a game that can be very, very challenging and it’s because the speed in which the block moves through the levels is set on a steep learning curve. An introductory level or two moves along at a nice casual pace, but half an hour later success demands fast reflexes and quick thinking. For players that don’t find that challenging enough performing well in the game’s “main” levels unlocks a massive number of side quests that have all kinds of interesting rules placed on them such as confusing shapes or minimising how many rotations players can make. Those extra levels are designed to test only the most dedicated Potzol players. More casual finds will likely give up in frustration.

That said, early on an “unlimited” game is also unlocked and for me that’s the most engaging part of the whole game. Shooting for high scores with a consistently increasing game speed and increasingly difficult shapes to make is the kind of high-score challenge that appeals to me more than the brief snapshot levels of the main event. 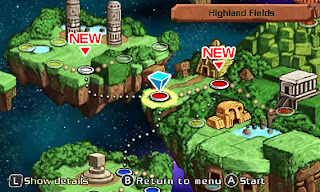 Because this is a game where the action is consistently travelling into the screen it’s a natural fit for the 3DS’ style of 3D. It’s a fairly subtle effect the developers have implemented, which is just as well because when the speed of the game picks up there’s so much going on that it can become tiring on the eyes. It’s perfectly playable with the 3D turned right off and this is the first 3DS game I’ve felt the need to do that on. Either way it’s a very basic looking game though the Aztec theme adds some level of interest.

I’m not sure why but there was a decision to add a story to the game, and watching the (surprisingly frequent) cutscenes is a waste of time. The music that plays during those cut scenes is incredible though. The in-game music is less interesting but overall the presentation of Potzol gets the job done without really pushing the 3DS in any interesting direction.

The biggest problem Potzol faces is in keeping players interested. This is one of those games that once it’s on is easy to lose an hour or two in. The levels fly by and failing at a level is more an encouragement to try again than a barrier to progression. It’s just not the kind of game that stands out as anything special, especially with the 3DS eShop already has an incredible puzzle game in the form of Pushmo. By comparison this is a well made and original game that doesn’t do enough to really stand out.

Skylanders drifts on to iOS