"Marvel" and "smart" don't usually go together, but...

I have reached the point where I cannot stomach the Marvel cross-media franchise’s approach to storytelling, at all. Sadly, Midnight Suns is full of it.

The relentlessly juvenile and quip-based humour that Americans seem to think passes for dry, droll and/or sarcastic humour pervades every single one of these things to the exclusion of anything else. When a Marvel superhero opens their mouth, the odds are strong that they’re going to blast out something hilarious like “well, that happened” or “he’s adopted” or “So, you like cats”, which has been carefully choreographed to make a cinema full of people provide the laughter. Really, though, it’s about as funny and witty as your typical sitcom when you strip the canned laughter out. Once or twice in a film would be fine, but this approach to “humour” is so pervasive that it carries the entire weight of characterisation on its shoulders. Iron Man quips differently from Thor, who is a different jokester to Starlord and the youthful quippery of Spider-Man. Regardless of which quippy hero it is, though, their entire personality is defined by how their beat-driven dialogue is delivered.

I coped with it better than many and was able to get to the second Thanos film before I dusted my hands of anything to do with Marvel. However, now this stuff makes me want to start digging at my brain with a rusted spoon through the nostril. It’s not funny, nor intelligent, and doesn’t do anything to enhance storytelling. I don’t care if the zoomers over there love it. They seem to since there are entire articles on trashy pop culture websites that list all the “awesome” quips. But that’s a resounding indictment of their education system because it’s just not competent writing. 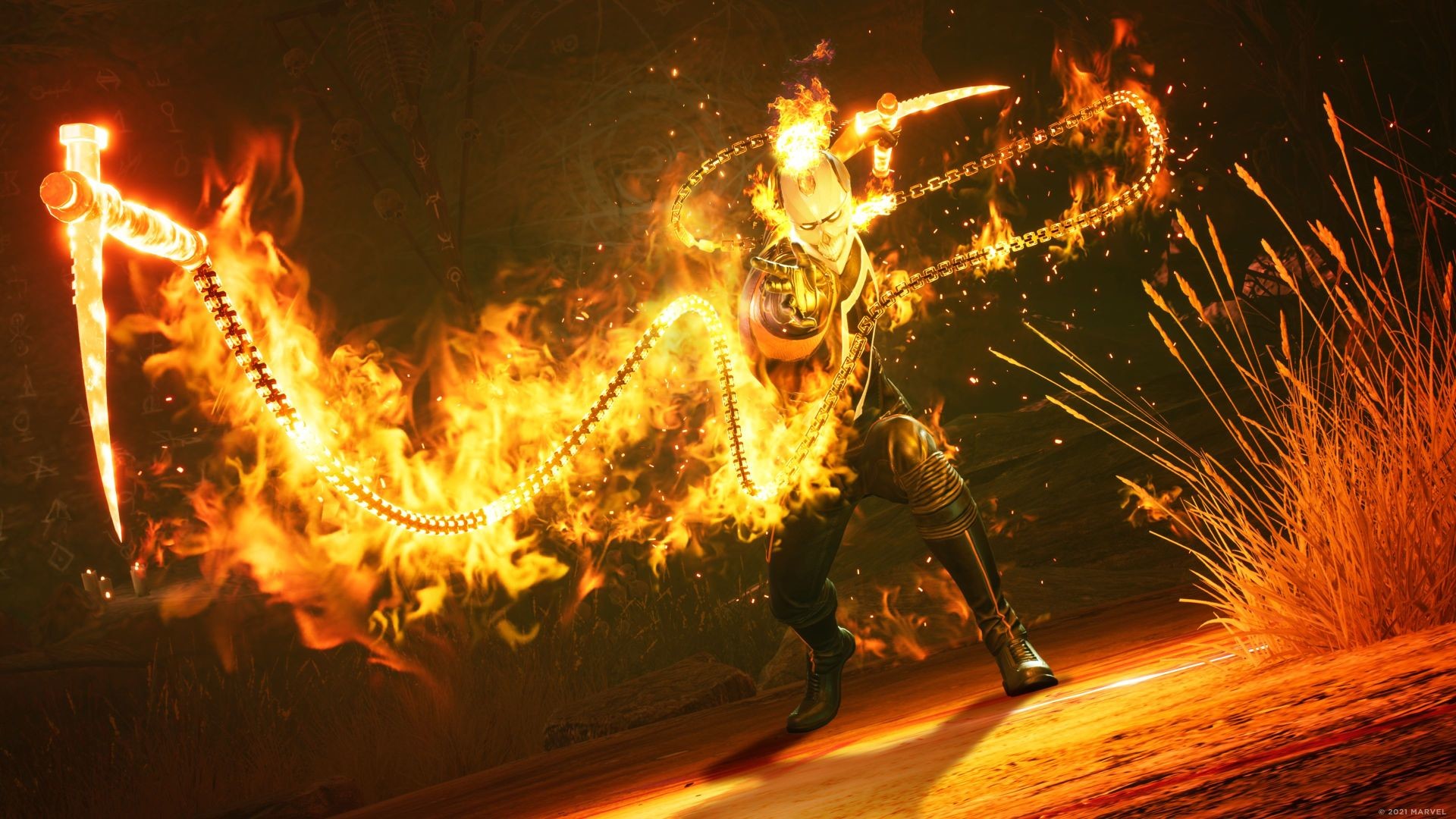 All of that is context to say I didn’t care about Midnight Suns’ narrative. It does feature a bunch of characters that, aesthetically at least, I prefer. Blade and Ghost Rider are two of my favourite Marvel characters, if for no other reason than a blaxploitation-style vampire and a dude with a flaming skull are just plain cool. But here they’re subjected to the same ham-fisted excuse for writing that has turned Marvel into such a commercially successful, intellectually bereft exercise. I did assume that this would be the case heading in. The suits that run Marvel are not about to let a Shakespeare or Kubrick undermine the work they’ve done to dull us all down. I nonetheless jumped on Midnight Suns because it’s a Firaxis game, and Firaxis has never let me down in giving me tactical experiences that I love.

Thankfully, Firaxis hasn’t let me down. The developer has nailed the brief in providing a superhero tactics game that allows you to feel enormously powerful while commanding a group of heroes. Each with vastly different special abilities that really suit their archetypes. You also get to take on an equally varied and tactically interesting rogue’s gallery of equally famous faces. I couldn’t tell you anything about the broader narrative and story, since I basically glossed over all of that (no I don’t care about utterly sexless superhumans having sanitised “deep-and-meaningful” conversations with one another between battles… Leave that for a game that understands humanity like Xenoblade Chronicles), but the combat system is so enjoyable that I’m dozens of hours in. That’s rare for me. I usually insist on the narrative being worthwhile.

Midnight Suns wouldn’t have worked as an evolution of XCOM, let alone Civilization, so Firaxis has taken a dramatically different approach to the combat system. It’s still turn-based, but this time around it uses a card system to determine which characters can attack and what attacks they have access to. It’s a dynamic not unlike what we see in the likes of Roguebook, and it allows for some effective streamlining of combat. You improve your characters by adding new and better attacks to the deck. Then, once the battle has been joined, you need to make the most of what you have access to. This means that you won’t be able to spam the same tactics repeatedly. You’ll take a party of heroes into each battle and all heroes have different cards but share the “deck” that you draw from. What this means is that sometimes your favourite hero won’t have any attacks in your “hand”, so you’ll need to make sure you come to terms with all the heroes, lest you be left with turns where you are effectively unable to do much damage. 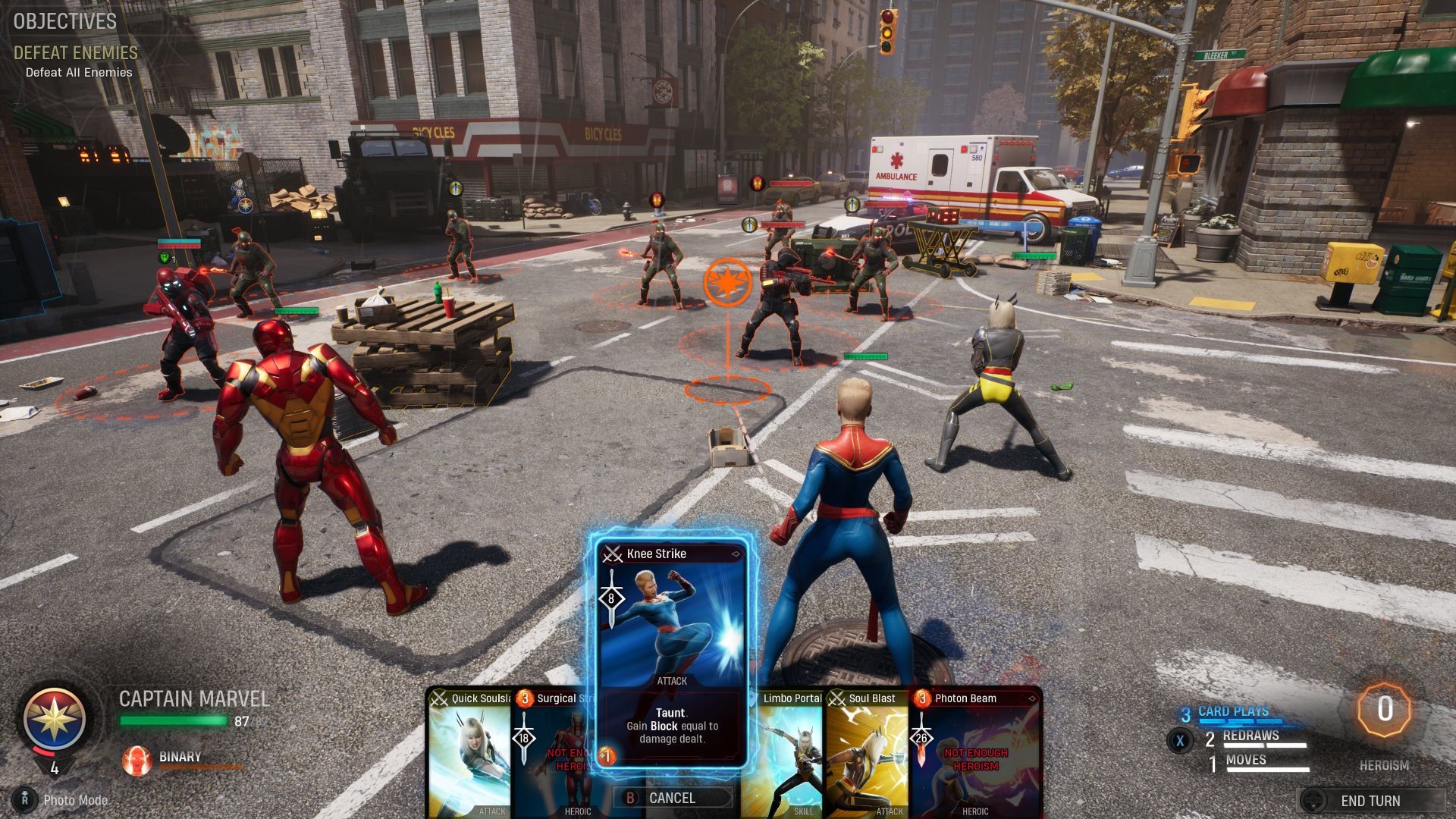 What sets Midnight Suns apart a little from many other card-based RPGs is that it is overwhelmingly focused on aggression and doing damage. There are some abilities that have a defensive impact, but those tend to be vastly overpowered by the aggressive cards, and battles are more an example of a war of attrition. You’ll be using defensive cards as much as you can to slow the rate of bleeding. However, success in every battle is determined by your ability to do as much damage, as quickly as you can, to enemies.

Thankfully there is a vast range of ways that you can boost your ability to damage enemies quickly. Many attacks can move enemies around the battlefield, allowing you to bash them into one another (which damages both of them), or environmental hazards to damage and potentially incapacitate them. Positioning is of core importance in Midnight Suns, to the point that you’ll often feel like you’re playing an elaborate game of billiards, and it’s all dynamic and tactically interesting. Firaxis has effectively captured the big action appeal of the Marvel films and action games and translated it into something that is more cerebral and, therefore, more interesting.

The nature of comic books also means that the tactical structure in Midnight Suns is a natural fit. If you look at comic books, they are always designed as discrete and short stories that involve some kind of physical conflict with a villainous entity, before providing that entity with the chance to get away (and the promise of meeting them again), and then introducing a new big threat. Each level in Midnight Suns is, effectively, a single comic book. It has a simple premise and that physical confrontation. Then it moves on to the next one in a very different space and with a different enemy to take on. The flow from battle to battle is, consequently, as fundamentally compelling as it is reading one comic book after another in a series. It’s not deep, but you always know that the next bout of fisticuffs and villainous appearance is just around the corner. 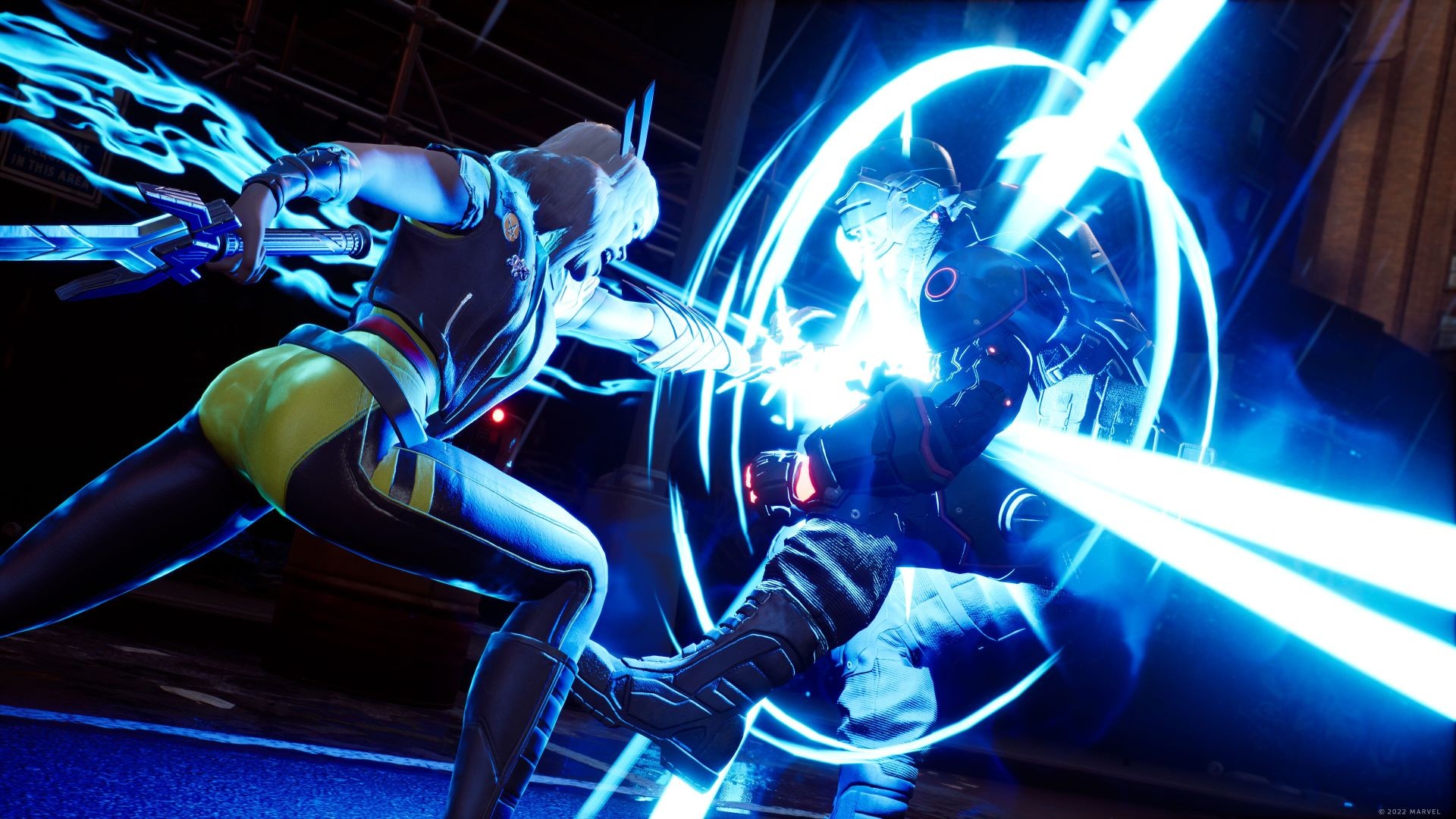 I do wish the game didn’t have all the supplemental features around equipment upgrades and those relationship systems. There’s a fair dose of blockbuster bloat in Midnight Suns. This is coupled with the narrative that is simply not engaging and means that the pacing of the game is in need of calibration, badly. This is not a pick-up-and-play game where you can blast through some levels and enjoy the fan service of it all. There was a Transformers tactics RPG that did a better job of that (Transformers: Battlegrounds), or even the Mario and Rabbids XCOM clones. But, again, the poor pacing is ultimately worth it because Midnight Suns, on the battlefield, is the best Marvel has been for a very long time.

The point here is that even I can enjoy this game, and I am most certainly not the target market for Marvel. What Firaxis has done is truly impressive, in taking a property that is known for big, dumb action and turning it into a genuinely interesting and furious tactics RPG. Those who are still convinced that Marvel stories are worthwhile will probably enjoy the story and application of characters, too. This means that this is going to be even more worthwhile for them. However, I do think that everyone, regardless of how invested you are in Disney’s content goldmine, will find something to appreciate about this one.