If you've not had your fill of deckbuilders yet, here's some sushi-flavoured action on its way.

I do imagine that the deck-building genre is about to hit a lull. For several years now it’s been one of the darlings of the indie industry, as it works nicely with the roguelike structures that indies favour. Additionally, it allows for quite a bit of depth via the cards without necessarily being too complex for the developer to design, draw and implement.

With that being said it’s easy to see that the genre has become saturated and developers are at the point where they’re only vaguely iterating on one another. As compelling as deckbuilding games can be, this is not a genre where you’ll feel an inherent desire to play them all, and with all of that in context, I do think Mahokenshi has a challenge ahead of it. It’s not that the game is bad by any means – I’ve really enjoyed it from the hands-on time I’ve had with it so far. It’s just that the only reason I gave it a spin was the aesthetic and theme and were it not for that I would have been perfectly content to pick up Monster Train, Roguebook or Super Bullet Break if I were in the mood for something like this in-between the other stuff I play.

Mahonkenshi’s distinguishing characteristic is it’s Japanese aesthetic and theme, though it must also be said that the developer – Game Source Studio – is a French studio and the aesthetic is more like Japan via Warcraft than anything that you would expect Japanese artists to draw. I have my issues with Western studios trying to bring Western aesthetics to games set in Japan (sure it’s inauthentic, but they have ninja clothing so it’s Japanese, see!), and here I do think that the cultural homogenisation ends up undermining the theme a little. With that being said, on an objective basis, the cards, characters and environments in Mahokenshi are gorgeous, detailed and colourful, and it’s easy to get lost in exploring the world.

The game adopts a turn-based, board-game approach. You’ll take control of a hero that starts a map with a very limited deck of very basic cards. By defeating enemies, visiting towns, completing side quests and finding treasure you’ll start to get access to much more powerful cards, and over the course of a “campaign” you’ll end up with a powerful deck indeed. You need to be flexible in how you build your deck, and that’s a big part of the strategy. Most “draws” of new cards are random in some way, meaning that each time you’ll play you’ll end up with different cards in your deck. When given the option to add more new cards, you’ll need to make sure that the cards that you add complement the existing deck, so that you’re balanced and prepared for the wide variety of enemy types that you’ll face.

Right from the start, Mahokenshi makes it clear that one of its biggest challenges will be the times that it sets you conflicting targets. For example, you might have some side quests that offer valuable loot and powerful new cards, but you’ve also got a rampaging Oni demon to dodge and a sacred circle to disrupt within a limited number of turns. Being able to achieve both requires a real mastery of movement across the map, the use of cards to make the most of each turn that you have, and the combat system. It’s not easy – and that’s good because you don’t want deck builders to be easy – though it can be frustrating to have good and careful plans undone because you desperately needed a card by didn’t draw it at the right time.

As with most deck builders, the narrative of Mahonkenshi is relatively thin. There are four different factions (or “houses”) that you can play with, and each chapter that you play through has its own story that ties into the objectives. It’s clear that the developers are looking to make something modular and expandable and so have generally gone with worldbuilding storytelling than an intricate narrative about characters and heroics, but there’s plenty to be intrigued about with regards to Mahokenshi, too. 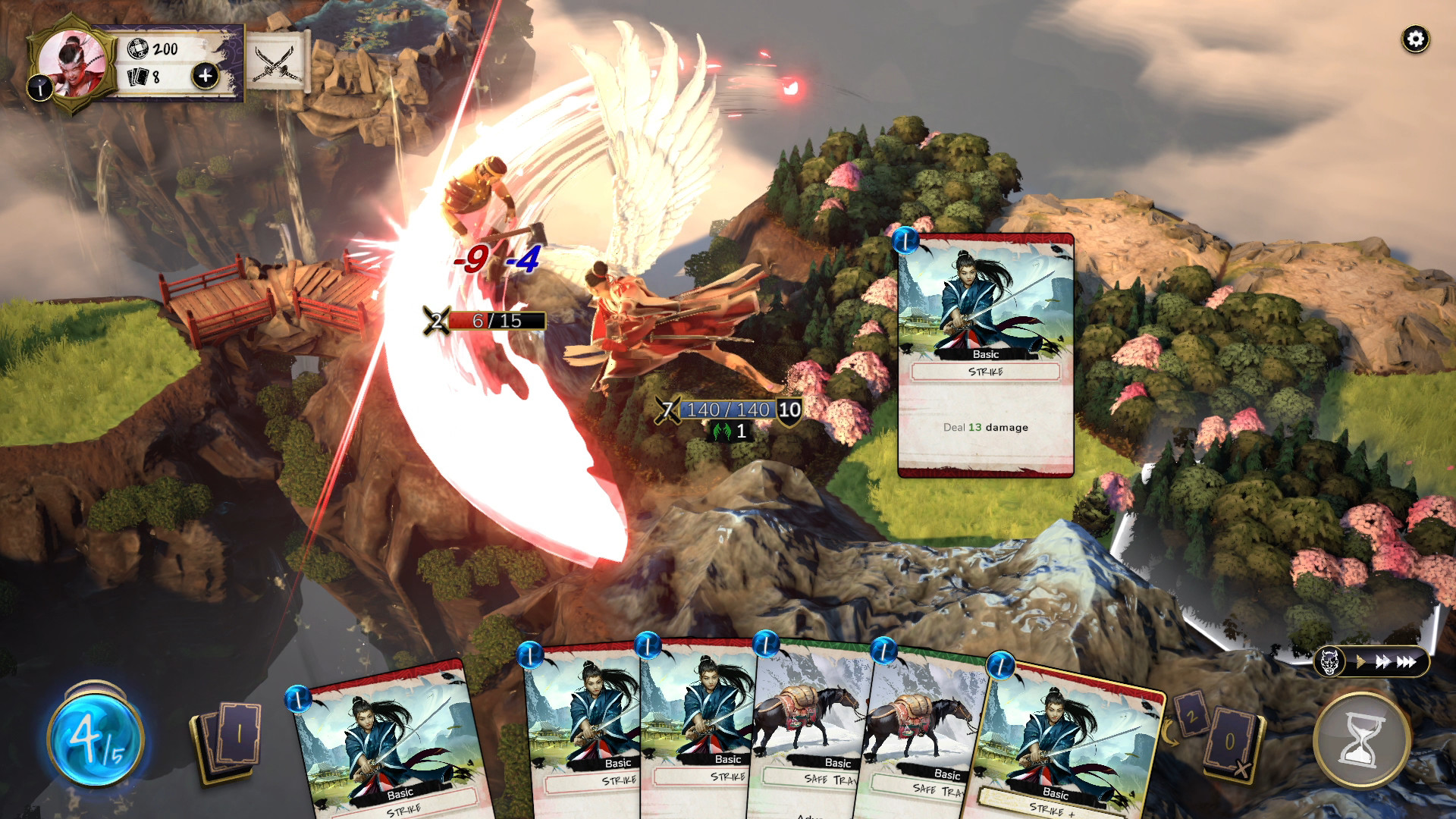 Overall, I do think Mohokenshi will find an audience. The library of more than 200 cards allows for plenty of careful, tactical deckbuilding, and the aesthetics and visual details add excitement to what is otherwise a pretty careful turn-based game. If you’re not burned out on the genre yet, keep this one in mind, because it is an early launching title in 2023 (January 24), and could well be a good start to a new year of gaming for you.