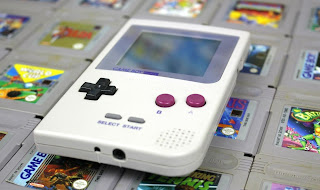 It has been such a long time since I did a Friday Ten list, but I’m feeling inspired to start them again, since they’re a fun way to get chatting about all kinds of games. Over the last couple of months, I’ve been on a kicker advocating for better archiving in video games, and I thought a good way to highlight just how important it is is to share a list of really old games that will almost certainly never be “saved” or re-released. These are games where the developer and rights are lost or a legal quagmire, or simply games that no longer fit with the publishers’ go-to-market strategy. These would be totally lost in almost their entirety now were it not for the emulation scene, and indeed these are the games that I spend the bulk of my time on my Anbernic devices playing, since I would prefer to play the “legitimate” version of any game where possible.

So, with all that in mind, here are ten Game Boy (and Game Boy Color) games that will never see an official release again.

Konami once held the TMNT property. It doesn’t now, and it’s a pity that it can’t do anything with their three TMNT Game Boy titles, because they are all excellent. Of the three I’m listing #2 here, though that’s purely for personal reasons. It was the first one I played and I kept coming back to it over and over again for years, until I tragically lost the cartridge in a house clean. TMNT 2 has it all: interesting boss battles pulled from the cartoon, taut and varied 2D platforming, with some on-rails and more brawler-style sections for extra variety, and four turtles to control, each with their own unique play style. On the humble Game Boy, it really felt like having the cousin to that brilliant TMNT arcade cabinet for play on the go. 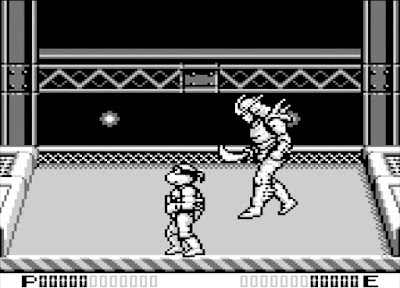 Speaking of having authentic arcade experiences for on-the-go play, Snow Bros. Jr is a more-than-admirable attempt to bring Snow Bros., a classic (now almost forgotten) Bubble Bobble clone, to a portable console. The game couldn’t fit levels of quite the same complexity as the arcade machine, or quite as many enemies on the screen at once, but otherwise, the developer got everything in there. Snow Bros. Jr had all the personality and charm of the arcade game, the fun bosses, and a brilliant rendition of that theme song. Unfortunately, we’ll never see this game officially again. The developer and publisher are long gone, and even if, say, Hamster was to acquire the rights for the property to revive it for the Arcade Archives series, it will be the proper arcade game that gets saved, and not this plucky little “demake”. 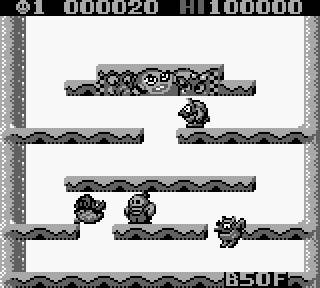 This game is a fascinating story in its own right, because it belongs to a series that is missing chapters IV through IX. Yep. Rare (that Rare) created the first three Wizards & Warriors titles for the NES, and then just… leapt… to chapter ten with this one. With all the changes in ownership that Rare has gone through (and the fact that publisher, Acclaim, is no longer with us), it’s unlikely that we’ll ever see a continuation of this series, or just this particular game back again. That’s a pity, because there’s a lot of dark fantasy charm in W & W X. It’s almost like a precursor to (sorry, I have to say it) Dark Souls, with challenging exploration and boss battles a particular hallmark. 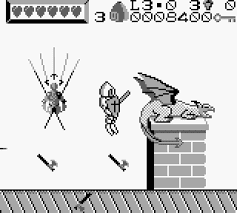 Kung-Fu Master deserves to be remembered a great deal more than it is. The NES port was legendary for directly inspiring Super Mario Bros., Street Fighter, Fatal Fury and King of Fighters. That’s a level of influence that deserves to be preserved. The Game Boy port might not have had the same direct impact, but it’s actually a really good little action game, with a high level of difficulty, memorable boss battles, and very (very) smooth action in comparison to other Game Boy games at the time. Even the good ones. Compare this to Wizards & Warriors or TMNT 2, which I listed above, and you see what mastery over fast action the developer had. Sadly, while Irem, the publisher, is still around, it is now exclusively focused on pachinko and slot machines and has never shown the slightest inclination towards re-releasing Kung-Fu Master in any form. 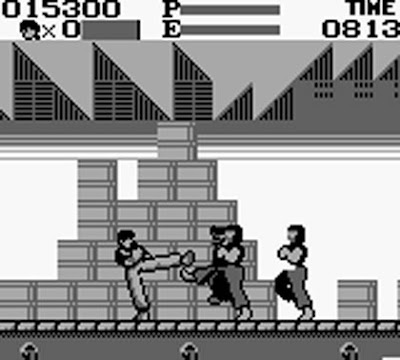 Azure Dreams is another Konami special (so even though it could in theory be re-released, we all know that’s not going to happen). The PlayStation release is no doubt the better-known one, but the Game Boy Color release is something special itself. Outside of Pokemon and the occasional push by the bigger players (Square with Final Fantasy Legends, Enix with Dragon Quest ports), there weren’t all that many handheld JRPGs until the Game Boy Advance landed. Azure Dreams, being a classical roguelike, was a shot of something very addictive right to the arm for people like me that loved the genre, but also preferred the personal experience of a handheld to the need to occupy living room screen time to play games.

The reason I know that we’ll never see the Game Boy Color port of Heroes of Might & Magic 2 again is simple: Ubisoft. Ubisoft owns the Heroes of Might & Magic property now, have ground that into the dirt, and is far too big and “AAA” as a publisher now to dust off a very humble-looking take on one of its properties. Of course, Heroes of Might & Magic 2 does look humble on the GBC, but it has all the depth and variety of the series’ early years, has plenty of maps and even a campaign mode, and dozens of different monsters and character types. For the time, having this kind of near-4X strategy scope in a handheld was unbelievable and could chew up entire nights all by itself (and so many battery replacements).

From the turn-based strategy to the RTS, Warlocked really is a real-time strategy game that was built for the Game Boy Color. It had all the fixin’s too – there might only be three base units (and one of those was the obligatory combat-free resource-collector), but there are 20-odd wizards to collect through the campaign, who can do everything from turn enemies into chickens to summon earthquakes to smash down buildings. And then there are dragons. You’d need to collect an egg and wait for it to incubate, but then you’d have an impossibly powerful monster that would certainly put you on the path to victory. Warlocked was clearly inspired by Warcraft, includes multiplayer deathmatches, and was an incredibly ambitious project that more than delivered. Many of its charms will be lost on us today, given what we can play on our handhelds now, but it would still have been nice to preserve this one as a historical artefact. Unfortunately, this developer is long gone now. They never even got to release the GBA sequel that was showing so much promise in development. 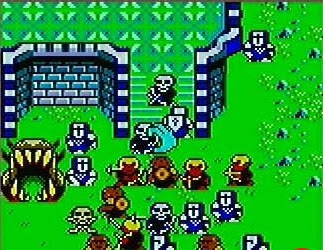 This one’s unique on this list because it would be very easy to preserve. Nintendo has every right to just re-release it, but Nintendo won’t do that because it’s a “demake” and therefore inferior to the SNES Donkey Kong Country. In fairness, of course, this game is a lesser experience, lacking the visual fidelity, level size, and multiplayer elements of the SNES cousin, but that’s also precisely why this game should be preserved. It’s a curiosity and it’s really quite interesting to see how developers took the most technologically advanced game on the SNES and ported it to the most humble Game Boy hardware. It’s fascinating to play today, and it’s a pity that publishers have such a limited perspective on what is worth saving that they wouldn’t see this as being something that people would want to experience. 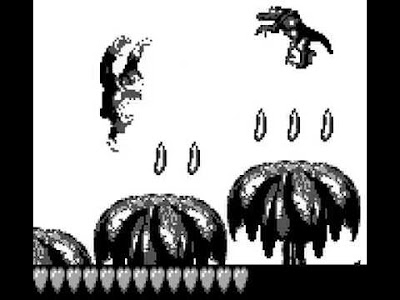 We all know why Ultima’s not coming back any time soon. EA owns this one now, having acquired the property, and EA’s one dalliance with Ultima was a catastrophe at the most epic, money-grubbing, mobile exploitation scale possible. Even if the suits at EA were to decide out of nowhere to bring Ultima back, and was convinced that they should back a proper Ultima game, there’s still no way in heaven or hell EA is going to let people play a Game Boy game. Even as an easter egg within the context of the AAA dross EA now focuses exclusively on. No, friends, Ultima – Runes of Virtue is a lost game, and the biggest tragedy of all is that Richard Garriott, the brain behind Ultima, reckons that this is his favourite console Ultima. You would think, then, that this really is art worth saving, given what Garriott’s support says about it and the broader classic RPG franchise. 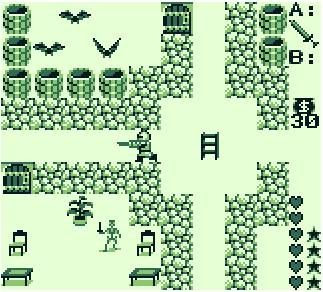 Mercenary Force is a side-scrolling SHMUP, but the presentation of it has led many people to talk it up as a precursor to the likes of Dynasty Warriors. You fill a party of heroes, each with their own attack style, and then try to clear a map from hordes of enemies, collecting cash to replace fallen heroes along the way. It is certainly a challenging game (or at least I think it is), but Mercenary Force has the aesthetics and action going for it. It is tactically interesting, varied, had some great character and enemy design, and felt substantial and unique to play. To this day the game resists any direct comparisons to anything else out there. Sadly absolutely everyone involved in the making and publishing of this game is gone, so it’s likely to be unsalvagable. 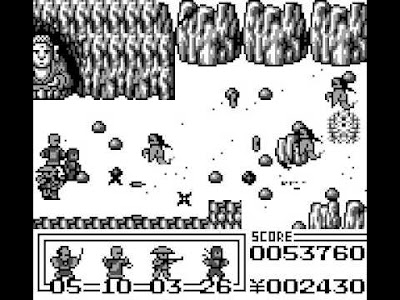 That’s it for this list! Are there any you might add? Let us know in the comments!

On creating a “mix tape” of the very best arthouse games from itch.io