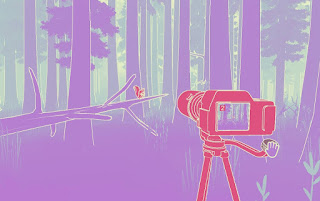 Nuts is a wide-scale release (it’s even on the Switch and PlayStation!), but what the game is fits so beautifully with the itch.io platform that it’s worth supporting it on this one if you can. Nuts is pure voyeurism only you’re not spying on people… it’s about looking at squirrels!
Yes, that’s right. Nuts is a wildlife-spotting simulation where you and your handy camera needs to track and capture squirrels going about being squirrels. Your long term goal is to figure out where the nest of native squirrels is, but this isn’t a game with any insidious meaning behind it; it’s a simple celebration of nature. Backed with a really gorgeous, distinctive art style, this is an art game of the highest order.
Eyra, the Crow Maiden

The NES, or Famicom, as one of the oldest mainstream consoles, will forever evoke a strong nostalgia in the hearts and minds of older players. For some game developers, the console represents a unique challenge; working out how to make an enjoyable game despite its severe limitations. That’s what the developer of Eyra has done, and in the process they’ve produced a “new” NES game for anyone with an emulator (or emulation console).

Eyra is a platformer in the vein of the original Castlevania and similar. You play as the titular warrior princess, and are accompanied by a “brave crow trained for combat”. The pair need to make their way through a standard gauntlet of enemies and navigate over deadly pits and other traps. As an added bonus to the nostalgic, it does look like the developer has held back nothing with regards to difficulty.
Unhinged
If there has been a more influential demo in the history of video games than PT, I don’t know what it might be. Perhaps it’s because PT was never turned into a full game, but that little snippet of Kojima gameplay continues to inspire game developers to this day. Those game developers turn around and make things like Unhinged.
Unhinged may or may not be a good game – indie horror games are always a big roll of the dice, but this one does have an intriguing premise. You play as a grieving father that he haunted (literally) within a giant mansion, and need to explore (and survive) to unravel the mysteries of the house and come to terms with who you are.
Strip Blackjack 3310
Here’s an irony for you: back in the early era of PC gaming – DOS and early Windows – there were a lot of strip card games produced. Usually poker, but also blackjack. However, as the ability for graphics to display higher detailed character models has increased, and therefore the ability for developers to create a strip card game that delivers a superior experience has improved, the number of strip card games has declined. Go figure.
Strip Blackjack 3310 was created as part of a game jam that challenged developers to make something for the Nokia 3310 phone. As such, it looks incredibly primitive and, oddly, nostalgic, for all those strip games of yesteryear that, at the time, seemed so naughty, but are positively hilarious today.

Nioh: On Yokai and Hyakki Yagyo and why Japanese games are better