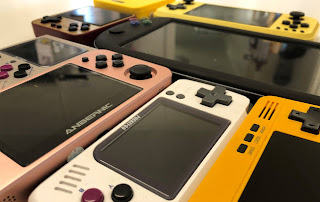 It started early in the pandemic. Lockdowns left me stuck at home, and the fact I couldn’t go out meant that I had a bit of extra cash to splash around. On a complete whim, I bought my first emulation handheld console, amazingly enough, because I saw an ad for it on Facebook (see, ads do sometimes work). That one didn’t turn out to be so great, but it was enough to whet my appetite just to see what else was out there.

This week my eighth little console arrived. Collecting these things has officially become a hobby for me.

I’ve reviewed a few of my purchases on DigitallyDownloaded.net, when I’ve bought something that’s hot off the presses, but many of my other purchases have been of older devices and there wasn’t much of a point in reviewing those. Instead of a review, though, I wanted to use this article to talk more generally about the appeal of these things as a hobby. Because they exist in a very grey area, given that they’re often used to play ROMs downloaded off the Internet, you don’t generally see the mainstream websites talking about them, but that’s a pity for a couple of reasons, which we’ll get into shortly, and I hope that this article helps to encourage you to check the space out for yourself. The reality is that many of the reasons that you may have held off on buying these don’t apply. They’re increasingly plug-and-play (where previously you’d need to be comfortable playing around with Linux and the like to get any use out of them), and they’re often made to an exceedingly high standard, to the point that they’re indistinguishable from “proper” hardware. So, with that out of the way, here are some of the reasons that collecting these little consoles is actually a great hobby. 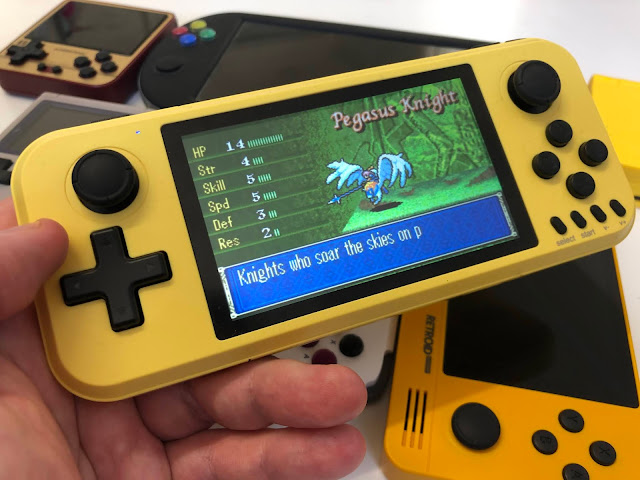 We’ll start with the obvious, but if you enjoy older games, then these consoles are an excellent choice. The lower range of these little devices handle early-era stuff comfortably – almost all will run NES, Game Boy, and Game Boy Color games, and their SEGA equivalents, with no issues. The mid-range will run SNES and Game Boy Advance games flawlessly. The upper range will also run PlayStation 1, with a few now also supporting PSP, Nintendo 64 and even Dreamcast to an acceptable degree. So, even the cheapest emulation handheld will give you access to an expansive range of games to play. As I mentioned earlier, too, most of them are now plug-and-play, where you just take the console out the box, turn it on, and you’re in and playing games. Sometimes you’ll need to load the games on to the SD card, but that’s as easy as copying files from a PC and almost everyone will be comfortable using these devices.

Now, I do need to mention a disclaimer here – there are some really cheap handheld “consoles” that you can buy online, but many of those devices don’t have an extractable SD card or emulators and instead run knock-offs of other games or cheaply-produced minigames. If you’re seeing consoles go for $10 or $20, then they’re probably of that category. The cheapest retro emulation consoles will generally be between $30-$40 and as high as $150 (before you get into the handheld gaming PCs space, which is a different matter entirely). $30-$40 is hardly a big ask, and even $150 is perfectly reasonable given that those ones will have ridiculously high-quality screens, metal construction and run PlayStation 1/PSP/N64 titles. It should go without saying that the actual quality of these consoles can vary massively – of the eight I own there are two that I would consider “duds” that I won’t use much going forward. I don’t mind that, though. As with any hobby, it’s inevitable that you’ll spend money on things that disappoint you at times. Overall, this is a competitive space and companies are vying with one another to produce comfortable, high quality, feature-rich devices, so it’s in their best interest to do the best possible job, and in most cases the end result is something worthwhile. 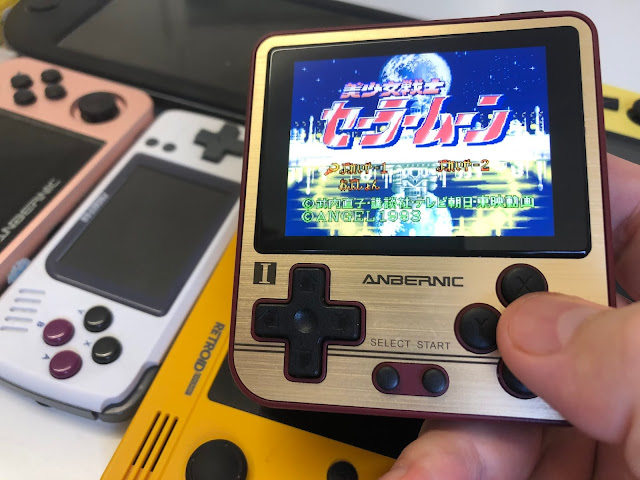 Let’s address the elephant in the room here; yes, these devices are used for ROMS. On the other hand, a massive majority of these games will never get another re-release. The publisher will have gone bankrupt or the owning company no longer sees value in the IP. Currently, the only way to “officially” play Game Boy Advance games (aside from buying a second-hand GBA and used copies of games) is to own a Wii U and the virtual console there is hardly complete. Sony has next to no interest in releasing any of its PS1 titles in their original format. Ditto Nintendo and the N64. I will always support the developer and publisher if they’re still using the IP – for example, I love the Collection of SaGa compilation on Nintendo Switch. Until late last year, though, I had no way of playing Final Fantasy Legend I-III without an emulation console, and so I would play those games on one. I would rather be able to play the games of yesteryear than not be able to, and the preservation of video games are critical for games as an art form. Emulation consoles are actually doing their bit there, by giving people not only the game, but the experience of playing it on a console, as intended.

A big part of the reason that these consoles have become something I collect is that they look nice (most of them, anyway). Whether it’s a Game & Watch decal, or a recreation of the excellent clamshell design of the GBA SP, these consoles evoke the same kind of nostalgia that you get from the games they play. It’s actually a lot of fun seeing how the various companies approach aesthetics and design, given that they’re all working on tiny budgets in comparison to the “proper” console manufacturers. 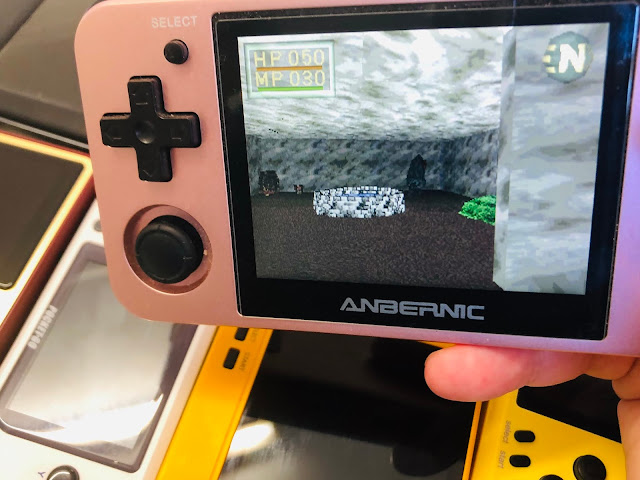 All retro emulation consoles will run the original Game Boy games effortlessly, of course. I find myself using the humble BittBoy for them the most, because though it’s the smallest and cheapest of all the consoles I’ve bought so far, the form factor makes it work. The devices with the larger screens are better for the SNES or NES titles, while the smaller screen is better for the GBA. One of the luxuries of having turned this into a hobby is that I’ve been able to match the game to the device, and juggle between them all based on the mood that I’m in.

As much as I love my Nintendo Switch, I’m increasingly disinclined to take it with me outside. While I have a high-quality case for it, it would only take a single accident to end up with a broken console and I really don’t want to deal with Nintendo’s support to get all those games back. On the other hand, I can pop one of these little handhelds in my bag, having my gaming fix on the go, and if something were to happen to the device then… well, it would be disappointing but a much smaller loss. So these consoles have become the standard for when I travel. 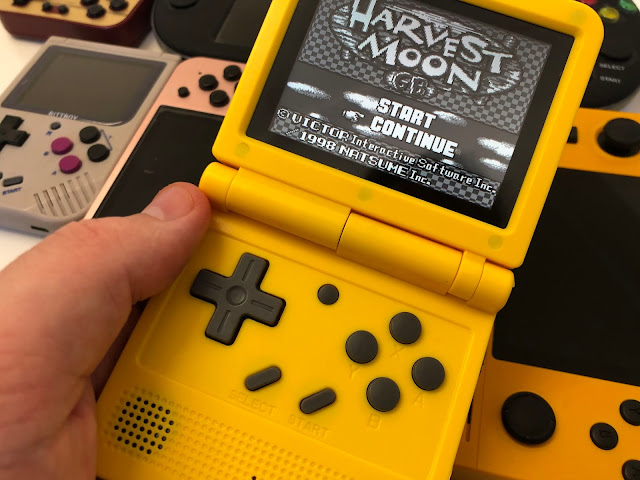 The best thing of all about this space, though, is how rapidly the quality is improving. While I’m relatively new to the hobby, I’ve looked back over the last few years, and the standard of the devices is escalating rapidly, as is the quality of the emulation, while the prices are dropping incredibly fast. Coupled with the ease of ordering, and there’s no better time than to take your own first steps into the world of emulation consoles.

If this does seem like something you’d like to try, I do recommend RetroMimi as a first stop (I know that probably reads like an ad, but I am in no way being compensated by the company). It offers decent prices on a good range, and they do a good job of getting the console to you in a decent time frame. RetroMimi doesn’t stock every retro console, but the full Anbernic and PocketGo range are there, and those two are the best brands to start with anyway.
Otherwise, the best advice I can have is to just get stuck in there! You’ll make mistakes when you’re just starting out in any hobby, and spend money on things you wouldn’t with more experience. Just don’t overlook the sector and assume that because the devices come from China and are relatively low price than they must be of low quality. It doesn’t work like that at all.

The next Neo Geo Pocket Color fighting game has been announced