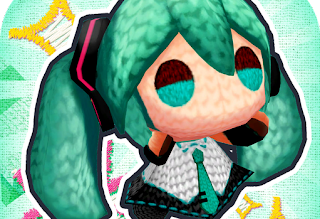 I must admit that I don’t check the mobile gaming space nearly as often as I probably should (especially since I subscribe to that Apple Arcade thing and don’t even check what games I’ve got to play on it). However, with this time of year being what it is, I had a couple of moments spare so I figured I’d check and see what is going on with Miku on the app store. There I found two Miku games that I hadn’t yet played (one of them being released within the last week), and they’re just the most adorable things.

Both Hatsune Miku Amiguru Jump and Hatsune Miku Amiguru Train are published by Crypton Future Media – the company that owns Miku herself. Where the company has previously worked with third-party companies to license Miku for games (the most obvious example being Sega for the rhythm game series), Crypton seems to be interested in using the mobile space to further Miku as a character. Neither of these games are rhythm games, see. Rather they’re more traditional mobile-type games that focus very heavily on making you love the characters.


We’ve seen these kinds of games before. That was also the case with Crypton’s first game, MikuLogi, which was a themed clone of Picross. None of these games are new experiences. What sets them apart is the presentation and Hatsune Miku theme. Jump and Train are particularly adorable, and it has to do with the “Amiguru” design. Amigurumi is a Japanese knitting craft, in which people make small, stuffed creatures (usually cute animals). We’ve seen the effect in video games before, too; Yoshi’s Wooly World is an end-to-end homage to the Amigurumi aesthetic. Just as that game is almost painfully charming because of it, so too are the Hatsune Miku games, where all the characters are designed to look like Amigurumi dolls.

The main reason to play on and earn coins is to unlock more adorably crocheted characters (and, in the case of Miku Train, adorable alternative carriages for the train, ranging from cutsey hedgehogs to sushi), and it quickly becomes hard to put down. You get the sense that Crypton isn’t overly interested in making money directly from these games – there is no way to spend real money on microtransactions and gacha, and you get a fortune of in-game currency as a bonus for nothing more than watching a short ad. It’s a generous enough system to unlock the new characters at a rapid-fire rate, and that’s fair enough, as these games are by no means deep experiences designed for hours on end play. They’re simple little pick-up-and-play things that promote a particularly cutsey side of Miku and the other vocaloids, and they’re built appropriately around that.

What this does point to is that Crypton sees the future of the company being about the character, rather than what that character does, as such. Vocaloids are everywhere now, and arguably the tech behind Miku’s voice is primitive (though Crypton having bought out of the Yamaha system to develop its own vocaloid software separately seems to be a step in dealing with that challenge). Beyond that, the traditional strengths of the Miku brand have been eroded over time; where Cryton had a near-dominance over hologram concerts as innovators, now they’re everywhere, for people both living and dead. Kim Kardashian was even boasting about having a private hologram experience with her (deceased) father not long ago. Even the idea of the virtual celebrity is now becoming ridiculously competitive thanks to the explosion of VTubers.


Crypton seems to be pivoting to a place more akin to Sanrio and San-X, the makers of Hello Kitty and Rillakuma, respectively. These companies make their money on creating beloved characters, and then managing that property by carefully selecting merchandising and collaboration opportunities that ensure that these characters remain right at the forefront of a broad cultural cross-section. Where VTubers can be a dark rabbit’s hole to crawl down, everyone in Japan has some kind of Rillakuma or Hello Kitty merchandise, and that’s where Crypton wants to pitch Miku. Creating these adorable little character-driven games, that don’t rely on being a fan of Miku music or vocaloid culture, is a pretty firm step in that direction. As to whether it will work, we’ll need to wait and see, but the three titles Crypton has produced so far have all been genuinely good, fun, and charming, and have the same broad appeal qualities that have made the various Rilakkuma and Hello Kitty properties so effective as character projects.

Now, all Crypton needs to do is get someone to make the actual Amigurimi dolls for purchase. Nintendo did that with Yarn Yoshi – remember the giant Yoshi knit Amiibo? Yeah, I bought that. You can be sure I’d buy every single Miku one Crypton might produce.

What we’re looking forward to in 2021: Brad’s big five