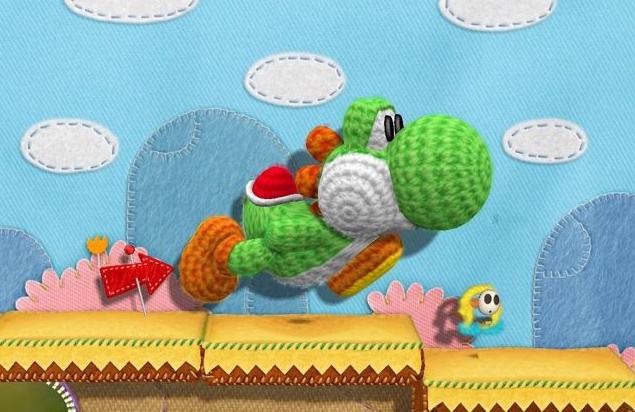 But hey, Yoshi’s Woolly World is a load of fun, so maybe I will let them slide this once. After the limited critical and commercial successes of Yoshi’s Story and Yoshi’s New Island, Nintendo clearly decided to take Yoshi back on board and give him the attention he deserves (sans Baby Mario, thankfully) and create a game that is accessible for the youngsters that get drawn in by Yoshi’s overwhelming cuteness, yet also tricky enough for those who want a bit of a challenge in their platforming games.

Situated on Craft Island, that pesky Kamek has come along and stolen all but two of the dinosaur buddies, and has turned them all into yarn balls for his own nefarious craft-related evil deeds. It is up to the remaining two Yoshis to find the yarn balls and put their friends back together, and defeat Kamek once and for all. Weak story aside, it creates enough of a plot for the green and red Yoshi to engage in many craft related shenanigans (no yellow Yoshi? This game better be getting 0.5/5, Brad – ed). 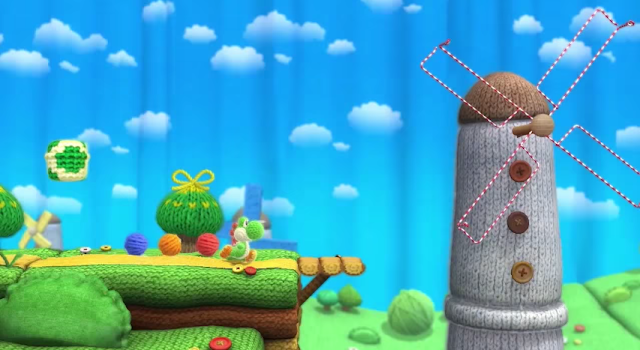 Of course, utilising wool, material and various craft pieces isn’t a new concept in Nintendo platformers, with Kirby’s Epic Yarn having come out on the Wii some years ago. It does come across as odd for Nintendo to adopt similar art styles across genres, especially ones this unique, but in all honesty, with some of the cool concepts used in Yoshi’s Woolly World, I am glad the developer team revisited the concept. Much like a Mario 3D platformer, most levels contain a unique concept that separates itself from the other levels, keeping the platforming fresh from start through finish. One level has Yoshi clinging for dear life on a runaway curtain, avoiding fast approaching enemies and having to jump from curtain to curtain throughout the level. Another has the Yoshis creating yarn boulders out of wire-frame Chain Chomps, and using the boulders to plough through walls and enemies, only to find that they need to unravel the Chain Chomp so that they can follow the Yoshis to the next part of the level for another light hearted puzzle to solve.

For the nostalgic, Yoshi’s Woolly World has made the best attempt yet of recapturing the magic of Yoshi’s Island on the Super Nintendo. From Yoshi’s classic flutter jump, licking enemies and turning them into projectiles, secret question mark clouds to find, to finding powerup to turn him into other transport forms, such as Moto Yoshi and Mer-Yoshi, fans of the classic will feel right at home here. The twist of course is the fact that Yoshi is now in a craft-like environment, turning his eggs into yarn balls that can be used to tangle enemies and knit new platforms, and secret passages can now be found by pulling a loose thread on a wall. It’s quite fascinating to discover how Nintendo have made a game feel so similar to both its previous yarn game and the Yoshi franchise, and yet also make it so uniquely different at the same time.

Yoshi’s Woolly World is also perfectly enjoyable for players of all skill levels. The beginners have access to what is called “Mellow Mode”, that effectively gives Yoshi a pair of wings that it can use to flutter jump forever, this means that Yoshi can float through an entire level, making things easier without guaranteeing success as there are some airborne threats. After all, if there was no sense of challenge children would get just as bored as adults. There are also Power Badges that can be purchased with gems, these give Yoshi an ability to help it through a level, these come with powers such as revealing hidden items, not being hurt by fire and gaining an improvement in speed. As for the more experienced players, they are catered for in terms of collecting everything on offer, each level has you finding five flowers, five yarn balls, twenty Miiverse stamps and finishing with full health. These are pretty easy in the beginning, but even the most hardened platforming veteran could be sweating over some of those Power Badges by the end of the game. 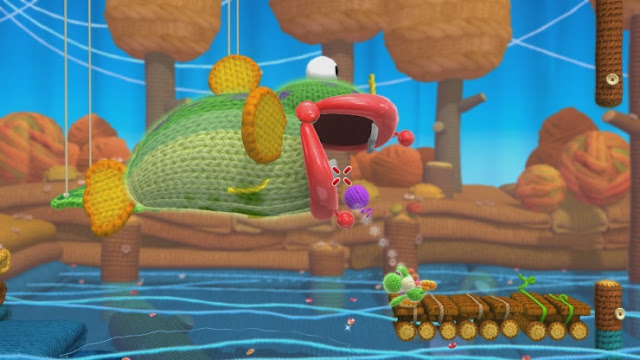 For those with a friend, local co-op is available. This is what I have spent most of my time playing, and it has produced mixed results. The first three worlds proved to be rather simple, with our Yoshis only getting in the way of one another a handful of times, though on the later levels that require some precise platforming, it is clear that co-op was not considered closely, as there was simply no space on some of the ropes and platforms for two Yoshis to fit together. There was a way around it however, as Yoshi can swallow his friend and either keep it in his mouth or turn it into a yarn ball and throw it. A number of times we had to take advantage of this mechanic so that we could get through the levels unharmed, though it tends to make the person getting a free ride feel a little useless at times, which is unfortunate.

For those without friends but has a vault full of amiibo money, Yoshi’s Woolly World has an amiibo function where it creates a co-op partner for you. All Yoshi amiibo work, including the Smash Bros. and Mario Party ones, though the Yarn Yoshi amiibo is the best to play with, as you can save custom Yoshi patterns to that one, that turn him adorable cow patterns and the like. Your amiibo partner is basically a clone of Yoshi, and does whatever the other Yoshi does. This comes in handy to throw your amiibo Yoshi up to hard to reach places, but frustrating elements come into play, such as when Yoshi is about to eat an enemy, only to be eaten by the amiibo Yoshi standing behind it. This mode takes a lot of practice, but it’s an excuse to buy more of those damned toys anyway.

The other amiibo functionality has the majority of already released amiibo create patterns on Yoshi. Some of these patterns are downright adorable (Donkey Kong, Bowser, King Dedede), while others are absolutely horrific (Meta Knight, Wario, Sheik). It was a nice touch to see the third party amiibo of Pac-Man, Sonic and Mega Man included, though for whatever reason we do not get to see Pikachu or any of the other Pokémon amiibo used as patterns for Yoshi. There are plans to include future amiibo such as Ganondorf and Olimar in the Yoshi patterns, which is a nice touch that will get players breaking out the game in the future to check them out. It’s purely optional stuff, but it’s fun, and who doesn’t have some of these amiibo by now? 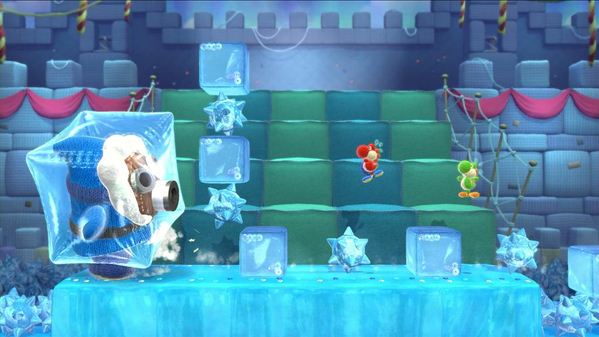 So I mentioned at the beginning of this review that the Yoshi clan is just as evil as Kamek, and I thought I would wait until the end of the review before I explain myself. You see, while I understand the necessity of saving your friends when they have been kidnapped, especially if you have the means to do so, there is absolutely no need for Yoshi to perform the nefarious deeds it does throughout its mission. In the first few levels, Shy Guys are found lounging in the sun, bouncing together on tree tops, as well as other completely natural, innocent activities. Even when Yoshi comes along, they don’t deviate from their activities to attack Yoshi at all, but of course, a Yoshi needs to eat, so the natural thing to do is for the Yoshi to eat these innocent fellows.

I am not a hundred percent if this was intentional or not, but after these first few levels, Shy Guys start getting their own back, seemingly sick of Yoshis abusing their race. Shy Guys begin to arm themselves with spears and bombs, and don ninja outfits in order to prevent Yoshi from destroying their race. This abuse does not stop at Shy Guys either, as Yoshi clearly has no care at all for the Fluffin’ Puffin race. These penguins usually come as a mother Puffin and her six babies. Of course the only thing for Yoshi to do is to kill the mother and steal the babies so that Yoshi can throw the babies away. Yoshi also comes across Fluffin’ Puffin nests, which gives him more babies to throw! Yoshi is an evil, evil monster when you think about it. Not that it’s something to take seriously, but in a different world with a different art style people would be thinking this game is far less innocent than it appears to be.

Despite the odd frustration, Yoshi’s Woolly World is an incredibly fun romp. It has been a long time since the world got to see a console Yoshi game, and the fact it hearkens back to its SNES roots better than the recent handheld attempt is a joy to behold. This is one of the best platformers I have played in a long time.