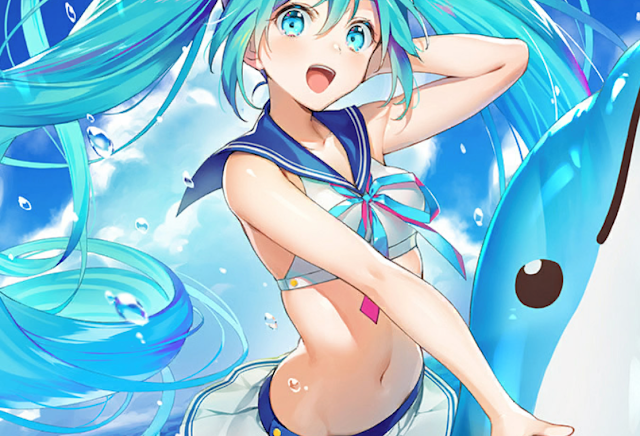 Here’s a great rule of thumb that all game developers should keep in mind: If you have something really, really good, and you would like to make it even better, add Hatsune Miku. Case-in-point: MIKULOGI takes nonograms – popularly known in the west as Picross thanks to Nintendo and Jupiter’s series – and adds Hatsune Miku. By doing so, Crypton made nonograms even better.

Related reading: Don’t forget to grab the Hatsune Miku Switch game if you haven’t yet. It’s just that good.

MIKULOGI is a nice, simple, clean application for your iPhone. There are three “difficulty” settings – “easy” puzzles give you 5×5 puzzles to solve, “medium” puzzles are 10×10 and “hard” puzzles are 15×15. Thankfully there aren’t the 30×30+ sized puzzles that I’ve got in my nonograms books that I’ve brought back from Japan over the years (those test the patience a little too much), but the 15×15 puzzles are still complex enough that they’ll test players. MIKULOGI does nothing to change the basic rules of nonograms, but there is one hell of a prize for finishing puzzles to look forward to. With most nonogram games the prize at the end is the picture that you’ve just filled in – whether that be a simple hat or something stunning like a grand architectural work. With MIKULOGI you get that… and you also unlock a new artwork of Miku and her friends with every completed puzzle. Hardcore Miku fans would have already seen most of the artwork, but it’s still gorgeous and a hell of an incentive to keep playing on, given the size of the gallery that you’ll end up with.

There isn’t an active tutorial in MIKULOGI, rather, there’s a couple of panels of written instructions to introduce players to the world of nonograms if they’ve never played them before. It won’t take long to learn, because like any great puzzle game, nonograms can be learned in five minutes, but it’s learning the logic around the puzzles where the life-long challenge is found. For those who are new to nonograms: A grid has been broken down into a grid of squares (either 5×5 10×10 or 15×15 in this case). Across the top and side of the grid are numbers, which indicate to you how many squares in that row or column need to be “filled in” to create a picture at the end. So, if you’re playing a 10×10 grid, and the number “10” is on the side, then all the squares need to be filled in. On the other hand if there’s the number “1”, then only one of the ten squares is part of the picture, and the puzzle is in applying logic to figure out which of those squares is the right one.

You do that by cross referencing other rows and columns and eliminating squares that don’t fit. For those that are new the 5×5 puzzles really are ridiculously easy because the grid inside only contains 25 squares total and it’s very easy to eliminate down the picture. The great thing about nonograms is that while they become harder the larger the grid becomes, they don’t introduce any new “rules,” and the logic challenge remains the same. As with other great puzzle games out of Japan (hello Sudoku), nonograms will send you nuts, but you’ll never feel like you don’t understand what you need to do to play.

There are 150 puzzles in total, as well as four bonuses (and yes, that does mean 150 bits of gallery art to unlock). I do feel that the balance is a bit off with that, as there are only 25 “easy” and 25 “normal” puzzles, leaving players with 100 of the most challenging to play too soon, but of course the harder puzzles take longer to solve, so this was probably done for longevity purposes. I do feel like 15×15 is the maximum size grid that the developers could have easily worked with, as any larger and it would have been too easy to fill in the wrong squares, but as it is mechanically MIKULOGI works wonderfully well.

The only issues that I have with the game are all easily explained, too. Outside of the gallery unlocks there’s not that much in MIKULOGI that actually has to do with Miku. Backgrounds are minimalist and the actual nonogram pictures that you fill in by playing are generic stuff that isn’t related to Miku or her gang. Of course, for a reflective puzzle game that’s the right way to do things. Likewise, the background music isn’t the “Miku’s greatest hits” I half expected going in, but then that would have been disruptive and unnecessary, given that most people will play this while watching the TV or otherwise with the sound off (I would say “while on the morning commute”, but no one should be commuting right now. Stay at home and do the right thing to help fight back against COVID-19, everyone).

MIKULOGI is the first video game that seems to have been produced and published by Crypton (the creators of the Miku software and IP) itself. Previously the company has always relied on partners, such as SEGA and Degica Games, for this kind of thing, and while MIKULOGI is a simple, small effort, it does represent intriguing possibilities for what lies ahead with Miku. In the meantime, though, these here is a great little nonograms experience, for a tiny price, and by the end of the 150 puzzles, you’ll have a massive gallery of the most gorgeous Hatsune Miku art. I really couldn’t ask for more.