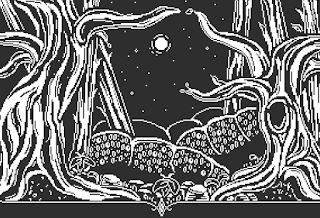 Cloud Climber is an experimental little game that was created as part of a game jam, but it has an intriguing premise and I’d love to see it developed out further. It’s a game about a world in which it has stopped raining, and humanity has started building towers to try and reach the clouds and find a solution. Pretty pertinent theme in this day and age, no?
It’s a pay-what-you-want short little game about figuring out how to keep climbing upwards, coupled with some lovely visuals that remind me a little of the adventures that I used to have in the world of Myst. It’s also more story-driven than you might expect, giving what might otherwise have been a lonely little trip a strong sense of story and theme. Expect it to be a bit raw – it was made in days, after all, but give this a go because it really does have a lot of potential.
What We Pretend To Be

A “game about farming, community, and loss,” What We Pretend To Be looks like it’ll be a powerful thing, where you need to grow wheat before a war breaks out. Your job is to “farm for the war effort,” while the game’s narrative focuses on “the long space people leave when they’re gone.” In other words this is going to be one of those games that isn’t necessarily fun to play, but it has an emotional resonance that makes it well worth the time to play it.

What really caught my eye, before I know anything about this game, was just how gorgeous it looked in comparison to the typical things that you find on itch.io. If you watch the trailer you’ll see user interface elements that are clearly lo-fi, but the art itself, and particularly the backgrounds, are truly beautiful, detailed, colourful and complex. You have to assume that this is an early effort and the developer’s looking for some support to take their vision further. In the meantime this is another name-your-price deals, so you can support it to whatever degree you feel like.
Hills & Hollows
World of Horror is one of my favourite games of 2020. You wouldn’t think that old, Apple Mac-like “1-bit” art could make for an authentic, effective horror game, but World of Horror certainly disproved that in the most resounding fashion. Thanks to that game I have an eye permanently out for developers leveraging that aesthetic, and Hills & Hollows looks like it might be a good one.
This game has been inspired by midwestern folklore (I’m assuming the American midwest, but pro-tip for indie developers, never assume that the audience knows which country you mean when you say “the mid-west”, because every country has a midwest, and the mid-west of Fiji is different to the mid-west of America). Digression aside, you’ll be using tarot cards to change your fate and determine the game’s outcome. This is only a 10-minute demo that was cobbled together for a 2019 game jam, but given that it has just been released on itch.io now, one would assume that the development team is looking to do more with it.
Last Colony
The last one for this weel, Last Colony, caught my attention because it’s a strategy game with hexes, and I do enjoy my hexes in strategy games. Very, very much. The whole aesthetic of this game is attractive and vibrant, and that’s backed up with a strong premise. You play as a leader of a colony that has “woken up from cryosleep” only to discover that earth is now gone, and this is the last colony left. Your job is to find a way for it to survive on their new home.
Your goal is to destroy enemy structures and towers on randomised maps in order to secure this new alien planet. It doesn’t look like the most complex game out there, but the board-game like minimalist aesthetic is very appealing, and it also looks like the kind of streamlined strategy game that you can play in a couple of hours, in-between those months-long Civilization VI campaigns…
That’s it for this week! If there are any new itch.io games that you’d like to bring to my attention, don’t hesitate to drop me a note! I’m very keen on celebrating the creativity and energy of this truly wonderful platform for games-as-art.