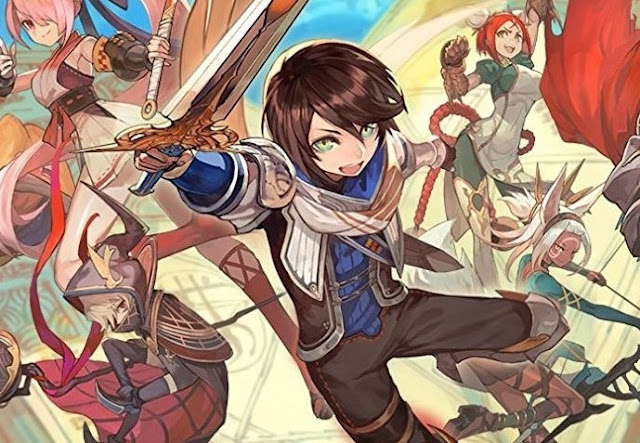 RPG Maker MV might share a name, features and toolset with its PC counterpart, but they’re very different pieces of software. RPG Maker on the PC is a reasonably serious tool that you can use to create commercial software. RPG Maker on Nintendo Switch is more akin to a toy, and that’s fine. Just like Super Mario Maker did for platformers, RPG Maker is a chance to indulge your love of JRPGs, get a bit creative, and then share that love with a community of similarly-minded fans. You can’t ask for much more than that.

Related reading: Our review of RPG Maker MV on PC.

The reason that RPG Maker MV on the Switch can’t work as a game development platform for creating commercial products is threefold: firstly, you can’t import your own art and graphical assets. The software gives you plenty of art to work with, across themes as broad as dark fantasy and modern though to Arabian fantasy and traditional swords-and-sorcery stuff, but without the ability to import your own art you’ll never make something distinctly yours to sell. Secondly, you can’t mess with the code. RPG Maker on PC allows you to tweak the underlying code, allowing you to customise the engine to deliver the specific results that you want. With RPG Maker on Switch, you can mess around with the (very comprehensive) drag-and-drop interface, but never break into the actual coding.

Finally, even if #1 and #2 weren’t true, you can’t export your games. You can upload them to a server so that other people can download them to their consoles (and there’s even a free app that lets people play the games without needing RPG Maker itself), but you won’t be able to get your game working on PC, or natively as a separate app on console. 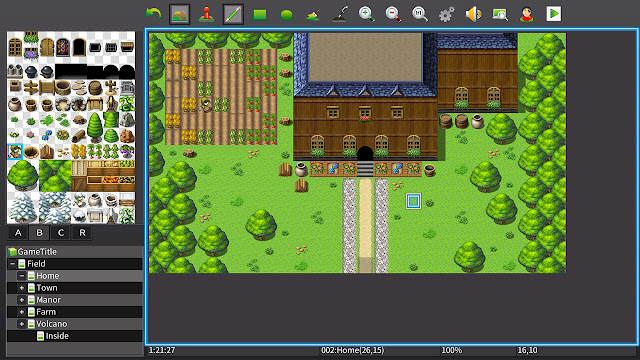 You may assume from the above that RPG Maker offers no value on the Switch, but that wouldn’t be the right way of looking at it, as it serves a different purpose. Not that I have ever managed to complete the development of a game on RPG Maker on PC, but when I use that software I do try to make my game completely distinct – I create art assets (usually black-and-white, to emulate the old Game Boy games), and try to heavily customise the engine so it suits a distinct kind of game that I’m trying to make. As I’m not able to do that with the console versions of the software (and I spent a lot of time puttering around with the 3DS RPG Maker), I instead focus on just kicking back and enjoying the JRPG and creation process. It’s suddenly fine if I’m making a Dragon Quest or Final Fantasy rip-off, because that’s all the software allows me to do.

As a sandbox, it really is comprehensive. Drop into the “database” and there are a dozen different menu items, letting you customise the character classes right though to what the in-game currency is called. Drop into the “events” menu and you’ll quickly realise that across the dozens of options you’ll be able to make cut scenes every bit as complex as the stunningly effective opera scene in Final Fantasy VI. You might not be able to import your own menu art and music, but there are dozens upon dozens of choices, with the promise of DLC to bring on more. You can even choose for combat to be a Dragon Quest-like first-person deal, or a Final Fantasy-like side-on combat scene. Once the community gets cracking with RPG Maker MV, there will be an endless variety of JRPGs to play, too, and as enjoyable as the creativity of a Super Mario Maker is, there is something special about being able to play dozens of people’s stories, ranging from the silly nonsense through to creating something at a quality that the game deserves to act as an actual job application. That’s what happened with RPG Maker on the 3DS, and that was both incredibly limited and released right at the end of the 3DS’ lifespan. RPG Maker MV is much more comprehensive and the Switch is flying high right now. The implications for the community are exciting indeed.

There are issues with the interface of RPG Maker MV, and that should come as no surprise since taking what is functionally PC software and turning it into a video game interface isn’t easy. Swapping between screens for placing down visual assets and events requires a lot of button presses, as does flitting from menu items and between maps. There’s also some noticeable loading times when swapping between maps, which makes the editing process laborious at times. It also goes without saying that writing those lengthy cut scenes is a pain when you’re not able to use a keyboard. 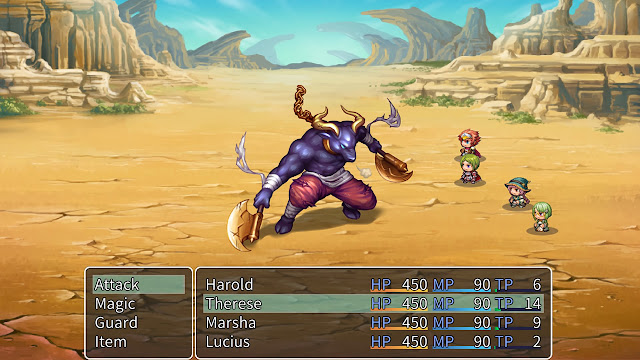 There is a compactness to the experience, however, which is highly appealing, especially for creation on the go with the Switch in handheld mode. The functions of the game are also very streamlined and easy to use – within the first couple of hours of editing you’ll likely have one (or two) dungeons, a town or two to explore and an overworld map designed – and it’s all very easy to learn thanks to helpful popups and a useful, entertaining, and basic-English tutorial. RPG Maker has always aspired to be a person’s first step into game development, and the developer has certainly hit their brief here.

You will learn basic ideas about game development, too. From the logic that drives games, through to balancing systems, the structure of events commands, how switches work, pacing the narrative experience and managing aesthetics, RPG Maker MV is a code-free introduction to everything that game developers need to consider. Because the software is a direct port of the PC version, you’re able to hit up the many (many) tutorials and creative ideas that users have uploaded to YouTube, and you’ll quickly realise that even without code you’re able to do more things in RPG Maker MV than you might have expected. Want to build a full relationship system into the game, so that you’re making a dating simulator rather than a traditional JRPG? You can do that. A totally combat-less puzzle game? That’s an option too. There are entire forums dedicated to sharing tips and tricks on RPG Maker MV on PC, and while some of them aren’t relevant to the Switch version (as some of those tutorials require that you dig into the coding on PC), there is more than enough there to give you plenty of great ideas for your own game.

I can’t recommend RPG Maker MV enough. Not only is it an ideal way for JRPG fans to engage with their favourite genre without needing to go and learn how to code first, but it’s also a low-pressure and undemanding way for people with an interest in game development to understand how game developers think and create. The Switch version is less robust than the PC version and you’re not going to be producing anything that you can make money with like you can on PC, but as a toy and a sandbox, RPG Maker is a delight. I can’t wait to see the kind of creativity that RPG fans come up with (and yes, I will try and upload a game of my own at some point too… if I ever find the time to finish one).

RPG Maker MV on Switch: Why I love this “game”