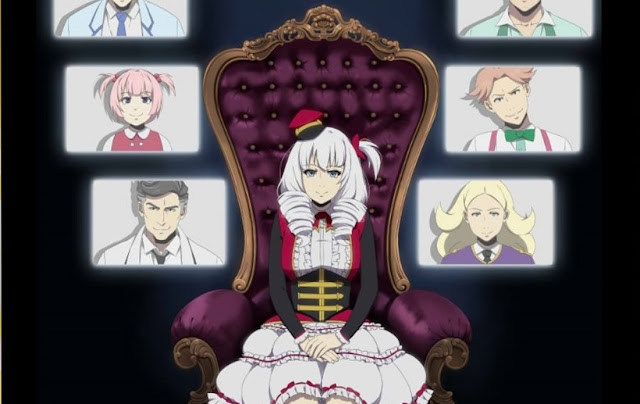 Quantum Suicide has been a very long time coming. We first wrote about the game back in 2016, saw it in action in 2017 at TGS, and thought then that things were coming together nicely. As happens so often with video games, though, things didn’t come together nicely at all, and after years of struggling to get the game over the line, Cotton Candy Cyanide (previously based in Australia, now Japan) has finally got the game out. I’ve been playing it in its beta form ahead of its full release later this week, but as it’s already in a stable state, I feel confident writing this review now.

Related reading: Of heavy influence to Quantum Suicide, Danganronpa is also excellent. Our review on PlayStation 4.

I’ll say this up-front: Quantum Suicide has been worth the wait. And then some. This is one of my favourite visual novels. Full stop.

The game is clearly inspired by Danganronpa… only it’s set in space. You (you can play a male or female character) wake up on a space station, with no memories. What you do find out almost immediately is that you’re part of an expedition to find humanity a new home, but there’s a slight hitch; the AI that powers the ship’s systems has gone a little psychotic, to put it mildly. If you thought HAL 9000 from A Space Odyssey was bad, you haven’t met Quantum Suicide’s evil AI yet. Evil AI decides that she (she can take the form of a hologram) will subject the crew of the ship to a game every couple of days, and the loser of the game is to be executed horribly. 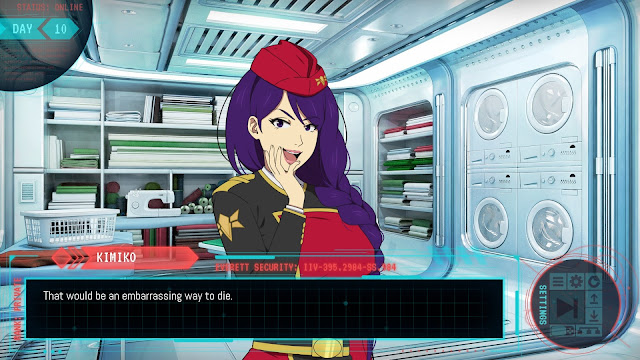 The nature of these games change each time, but each of them is a fairly standard Game Theory thought experiment, giving participants the opportunity to work together… or potentially mislead and betray one another to get themselves ahead. To use just one of the games as an example; teams are split up into four, and each is given 10 points to secretly distribute to those players. Then, members of each team square off against their opponents, with the higher score “winning” the round, and the difference in the points being their score. The team with the highest score wins the game, and of the losing team, the one with the lowest points distributed to them is the one executed. Aside from the execution at the end, we’ve all played the games in Quantum Suicide, because they work either as little mind puzzles to highlight lessons in classes or economics degrees, or as a way of filtering out candidates at corporate recruitment events (ergh…). Wherever you’ve played them in the past, however, they’re presented in an engaging and thrilling way here.

It is almost exactly the same premise as Danganronpa, replacing a morbidly cute robot bear for a violent (but oh-so-pretty… I think I have a thing for digital people) hologram, but Quantum Suicide is inspired by other similar titles too, such as Zero Escape and Lost Dimension, in that the decisions that you make through the game actually count. Danganronpa was on a firmly linear path through the narrative, but here it is possible to have some control over who lives and who dies at points, and naturally that affects the flow of the rest of the narrative in terms of deciding who you get to interact with down the track.

There are positives and negatives to this approach. On the plus side, you can save all the cuties and condemn those who you don’t like. That’s pretty neat. My Danganronpa experience would have been very different if I had that kind of control over the characters, for example. On the other hand, the fact that the story can’t perfectly predict who’s going to be left in play does mean that characters are a little “cookie-cutter” in the role they play within the overarching narrative. In Quantum Suicide, each of the characters has their own personalities and professions, but where Danganronpa felt like scenes were written with particular characters in mind, Quantum Suicide doesn’t feel quite as specific in that application. 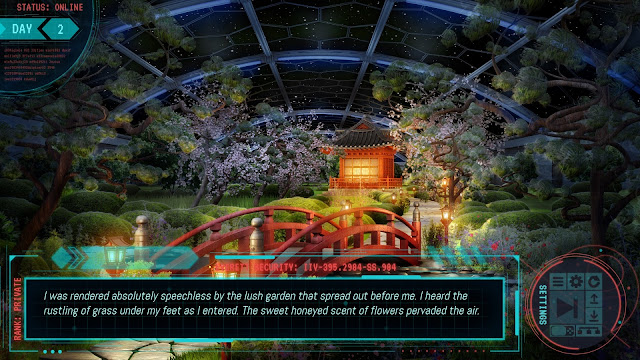 With that being said, there is an enormously large set of branching paths that the game offers, and part of the joy of Quantum Suicide, with is otherwise reasonably brief in comparison to its peers, is going through and seeing the different consequences for actions and the way that you choose to play the death game. Appealingly, it’s not just death that you have control over, either. Quantum Suicide has a relationship system built in, with seven different courtable characters (including the AI when she’s in her non-evil state, and yes, you now know who I tried to court – and did I try hard or what). In all, there are 30 endings available, based entirely on your choices, and those range from death right through to sweet romance.

Related reading: Also well worthwhile if you enjoy these kinds of games is the Nonary Games collection. Our review.

It’s worth noting that in addition to all of the above that I’ve mentioned, Quantum Suicide leans heavily into science fiction thought and the name itself, Quantum Suicide, is a reference to a very real thought apparatus. I can’t delve into this stuff too much, else I start to give away a plot that is pretty effective at being a page-turner filled with interesting revelations and discoveries, but suffice to say that the narrative explicitly sites quantum suicide thought, and the developers clearly thought a lot about this game and its thematic implications in writing it. It is anything but a run-of-the-mill easy-reading narrative, and even in comparison to Danganronpa and Virtue’s Last Reward, I do wonder if it’ll come across as a little too thinky and dry for some. However, if that is a flaw for some it’s most certainly not for me, and I would like to think that the typical visual novel fan – especially those that enjoy the “Game Theory” sub-genre of visual novels – will also enjoy Quantum Suicide’s mind puzzles.

Where Quantum Suicide betrays its more modest roots is in presentation, though it’s very close to being top-flight there too. Backgrounds are gorgeous, and I found the various exotic locations of the space station fascinating to behold. This is a big space station indeed, since it was designed for people to live on their entire natural lives, and stepping out into the parklands to see a massive open dome showing off the glory of space is one of my favourite visual novel backgrounds ever. The bedroom that your character sleeps in likewise has the most beautiful open window to outer space, and… I really could see myself living there, assuming that there wasn’t a killer AI out to get me. 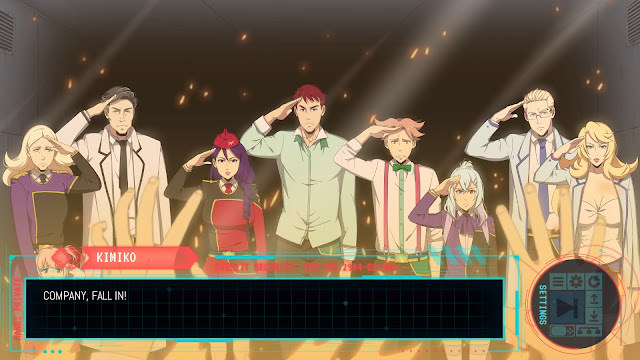 The character designs are not so much my cup of tea, though. They’re nicely detailed and I would imagine most would find them pleasant, and in a neutral state I find them very appealing, but each of them can also jump into highly exaggerated poses and facial expressions that I find to be a little too over the top, aesthetically. That being said, the game is fully voiced in both English and Japanese, the CG key arts can be particularly affecting (particularly the death scenes), and overall, this is clearly a high-quality visual novel and labour of love.

Quantum Suicide is intelligent, detailed, creative, and ultimately interesting. It’s actually a little disappointing that, as an Australian game, this one will be overlooked as a local product because it shares an aesthetic and genre that is more commonly related to the Japanese game development scene, but when you start playing it, you realise that it is more akin to a homage and response to the likes of Danganronpa and Virtue’s Last Reward, and in that way, it does feel very “Australian” (well, that and the rare line that references something truly Australian, like a lamington). It’s a homage in the sense that the developers clearly loved what was done with those games and wanted to put their own spin on it. It’s a response in the sense that the developers have also taken the ideas that those games presented, and built on them in a thematic way that continues to probe at the underlying Game Theory and philosophy that underpins all of these games.

When you start really pulling at what Quantum Suicide offers, it works as a metanarrative discussion around all of these games, and as a result, the game offers layer after layer of some truly fascinating narrative and structure that I’m going to be thinking about for quite some time to come.