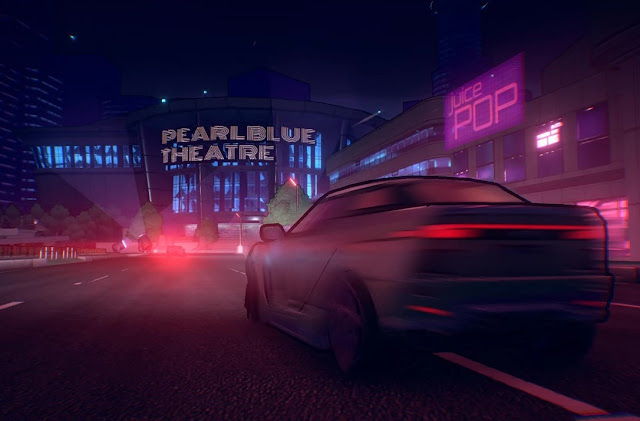 I loved re-learning how to drive with Level 91 Entertainment’s latest title, Inertial Drift. It’s a stylish racing game with twin-stick controls – the left stick steers and the right stick shifts the back wheel for a drift – and the relative unfamiliarity combined with the challenging nature of the game’s tracks makes for some exciting gameplay. As of late I’ve felt that most modern racing games, with their open worlds, checklists of content and often monotonous track design, can feel like work. No matter how realistic the simulations are in GRID or Drive Club or Project Cars, you’d need to go into the game with a passion for racing to have any chance of squeezing some enjoyment out of what are otherwise razor-thin margins between success and error. With Inertial Drift though, realism is out the window and stylish driving becomes paramount. The result is a racing game which is punishingly skill-focused, and yet also effortlessly fun.

The aesthetic of Inertial Drift is comfortably familiar; the blocky, 90’s era cars and colourful backgrounds are reminiscent of racing anime like Initial D, and subsequently 00’s films like Tokyo Drift. The ethos is continued in the game’s story mode, which introduces the player to a cast of characters, each with a car that reflects their attitude towards racing. It’s something I’ve wanted out of a racing game for a long time. Most Western racing titles come off feeling so soulless, with drivers remaining faceless and thoughtless (if there even is a driver at all). Inertial Drift takes things in the right direction, although the characterisation doesn’t go quite as deeply as I’d like. I imagine some people will want to skip the story segments all the same.

Driving, though, is where this game really hits its stride. From first stepping behind the wheel, players will real1ise that there’s a huge sense of speed in this game – acceleration is quick, tracks are well decorated and the background just whizzes by. This effect is strengthened by the extremely limited turning degrees afforded by the left stick. From the very first track, the game teaches players that drifting is the way to go around just about every course there is on display. Drifting is particularly expressive, thanks to its inclusion on an analog stick, and as the player becomes more accustomed to the controls, they’ll develop more finesse options to slide through all the game’s harder turns. One additional shoutout to the feel on the game is that on Switch, the HD rumble is masterfully designed to mimic the way the steering wheel shakes and rumbles as the car slides. It’s a bit numbing over a long play session, but ultimately it’s a huge boon for those who opt for Switch over PC. 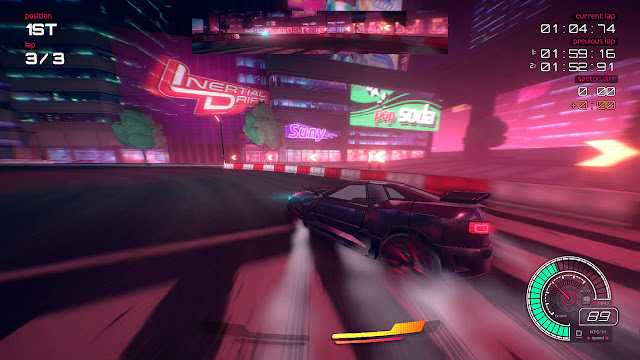 The design of Inertial Drift flips the feedback loop of the racing genre right on its head. In modern racing games, the player is often given a driving line as an optional path, and it’s almost like they’re being assessed on how well they’re following that predetermined path. In Inertial Drift however, there is no ideal path due to the complex controls, and thus it becomes the player’s job to figure out how best to tackle each turn. Over the course of a few races I’d ended up internalising the way the streets feel – the exact amount of pressure I’d need to exert on both sticks to glide my way around tight bends, and the usual timings for my splits which I’d then shave lower and lower. This is not just a game about driving fast, this is a game about freedom. These are roads for you to express yourself on.

The design of the tracks is also excellent. There’s a vaguely Asian aesthetic, and you’ll see lavish mountainous countrysides next to bustling metropolises; 360 degree highway on ramps and rustic little villages. The lack of real-world fidelity allows the developers to get creative with their locations and really create a fantasy landscape that’s fun to screech through. And although the graphics aren’t extremely detailed, the colour and lighting direction do a good job of conveying the impression of a locale, even if it doesn’t look too great when slowed down.

Ultimately, Inertial Drift is a game which can’t be judged properly until it’s in the player’s hands. The controls are tight and responsive, giving such a degree of expressive freedom when driving that it reinvigorated my love of the genre. I love that each track of this game is like a new discovery, a new opportunity to fine-tune my drifting skills as I learn the course layouts. One interesting quirk, at least on the current Switch build, is that there’s no minimap to show what the course layout looks like while you’re driving. There’s no way to know what turns are coming up ahead without squinting into the distance. This does suck on handheld mode, where it’s usually too late to start a drift by the time you can figure out if you’re going left or right next, but it does also encourage players to memorise turns and get used to chaining their drifts together. 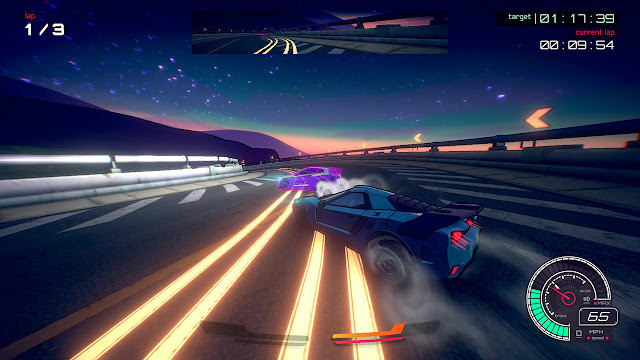 That’s the other design choice which I think might turn off casual players; the story mode expects everyone to master each track in multiple game modes – time trial, ghost race, actual race – before moving onto the next track. For players who just want an easy time, to see some sights and move onto the next one, the pacing does feel slow at the beginning. But while I’m not usually a big fan of repetition either, I had a lot of fun repeating the game’s generous offerings of courses until each one felt perfect to me.

This is very much a game for people who enjoy the feeling of mastery above all else. Everything about the design, from the controls, to the way the story mode progresses, to the online leaderboards – it all feels designed for skilled players to prove their prowess. It’s one of those games you wouldn’t be ashamed to practice, because the fruits of your labour will easily show. This is even reflected in the variety of cars on offer, which I can only describe as being like characters in a fighting game. Each one controls so differently that courses require entirely new strategies depending on what you’re driving – which offers tons of replay value for those who are dedicated. I only wish there was some kind of “rewind” feature to practice turns individually, because some of the later game tracks can be 3 minutes long or more for a single lap, and while I usually love these marathon stages, it does make going for a top time a grind.

Inertial Drift is gorgeous. More than just a racing game, it’s a set of systems for player expression, putting them right in the shoes of a hotshot rookie on the warpath to becoming a drifting master. Although the controls are complex on paper, they’re easy to pick up and feel natural within minutes. Especially for those who love the idea of racing games but are burnt out on the methodical, perfectionist nature of modern racing sims, Inertial Drift is a wonderful throwback to an exciting, stylish era.

Nintendo announces a new Hyrule Warriors out of nowhere