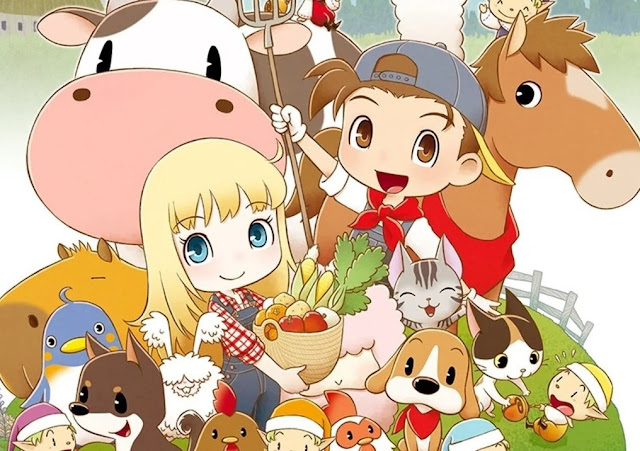 Harvest Moon (now Story of Seasons; this is a continuation of the old Harvest Moon, and Harvest Moon in the west now is actually a different series. I know it’s confusing, but it is what it is) is like Animal Crossing but with just a little bit more organised gameplay behind it. Animal Crossing, of course, came much after Harvest Moon’s first entry on the Super Nintendo, but it has become the much more prominent and influential property. However, for people that do want a bit more context to what they’re doing, Story of Seasons: Friends of Mineral Town is the ideal choice.

Friends of Mineral Town is still a hyper-casual game where you’ll be spending your time (mostly) aimlessly growing things, fishing, making a bit of money to make your house bigger and filling it with more stuff, and then, after work’s done, chatting to an eclectic bunch of characters and playing with cute animals. If that all sounds like basically the same deal as Animal Crossing, you wouldn’t be the first to notice… it’s just that there’s also a greater sense of purpose to go with it. You want to build the best farm you possibly can and live the simple life in the country, surrounded by animals, vegetables and, eventually, a spouse. It’s a game where you’re encouraged to get into a routine and rhythm; you’ll water the plants at 6am, head down the mine for some metals and materials at 2pm, take a quick bath then hit up the inn to chat up your favourite girl or guy at 8pm. You’ll be doing that rather than getting stuck into whatever whim hits you in Animal Crossing at whatever point in time. It’s slightly more “gamey” as a result, and while that’s not to say it’s any better or worse than Animal Crossing, some people may appreciate that additional structure, however marginal it is.

Harvest Moon, or Story of Seasons, speaks to a fantasy that is far more prevalent and potent in Japan than it would be elsewhere in the world, and I do think that’s why the game doesn’t have the same resonance in the west. In Japan, the dense levels of urbanisation and highly structured approach to work leads many to dream of farming, where they still work – and work hard, but for themselves and connected to the land. Here in the west, we appreciate what farmers do, of course, but we’re less partial to the work stresses. We work, and work hard, but it’s enough to start a home vegetable garden insofar as our desire to connect with nature goes. For most of us, we are much more interested in turning that kind of work into a hobby, a-la Animal Crossing.


I am talking in very broad strokes here, of course, but communal farms maintained by entire suburbs or towns of people, and people using their weekends to volunteer to work at farms just for the opportunity to get out of the city and get their hands dirty are more common to Japanese culture, and Story of Seasons does tap into that cultural pull. Throw the highly bright, anime abstraction over the top and it’s easy to see why this new game can’t possibly hope to match Animal Crossing’s more universal appeal and 100 million sales figures (number may or may not be an exaggeration).

People should give Story of Seasons a go, though. The simple routines that you’ll settle into after the first couple of hours of play are a rare kind of catharsis – sure, they’re abstraction of fairly mundane jobs, but taking a watering can to neatly arrayed rows of tomatoes, before cooking up some rich fish straw for your beau is mentally relaxing and yet also highly rewarding. The routine is broken up at regular intervals for special festivals and events, and there’s rewards there, too – raise your farm’s horse well enough and you’ll be able to enter into local racing derbies for special prizes… which of course you can then also pass on to your future spouse as gifts.

Friends of Mineral Town is also comfortingly small in scope. Within the first couple of in-game days you’ll have the full layout of the town memorised, and the scope doesn’t expand too far beyond that, which is just as well because if it did so, time management and trying to fit in everything that you want to get done in a day would become more stressful than it’s worth. You’ll soon get used to the daily routines of the couple dozen fellow citizens of the town, figure out the people you enjoy interacting with the most and, even though they never have that much to say… you’ll still find yourself ambling over to their favourite haunts to say hello. 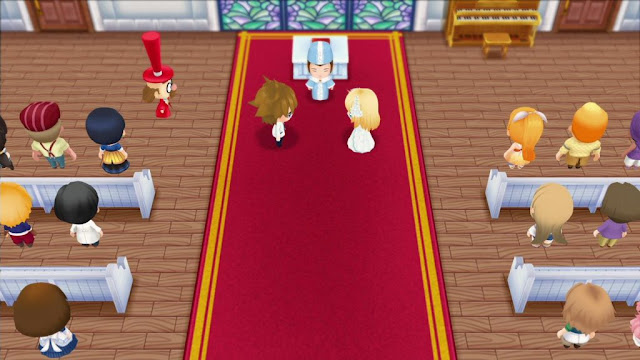 As the seasons flit by you’ll have different crops to grow, you’ll make friends with all kinds of different animals, and you’ll slowly upgrade your house and all the farm tools. When you think that each in-game “day” runs for around 15 minutes, there’s 30 or so of those days in a “month” (which represents a season), and then the four seasons of the year, you’re looking at quite the time commitment – 30 or so hours per in-game “year.” Story of Seasons makes sure that progress and rewards are dolled out at such a pace that you always feel like you’re working towards and earning things, without running out of things to do too early on. Even were you to somehow complete everything quickly, through, Friends of Mineral Town has an almost maddening X-factor in its raw charm that makes it very, very difficult to actually put down.

Related reading: For people who want some JRPG to go with their farming, there’s Rune Factory 4 on Nintendo Switch. Our review.

As a remake of the Game Boy Advance Harvest Moon: Friends of Mineral Town, it is worth noting that Story of Seasons is a little more limited in scope than the Doraemon Story of Seasons that was released on the Switch last year. That game had more in-depth storytelling (not least because it has an entire Doraemon narrative running through it), and a more detailed world to participate in. However, Friends of Mineral Town is also fondly remembered as perhaps the best entry in the entire series because it is so finely tuned around that simplicity. The developers have updated the visuals – obviously! – but it was a wise decision to not mess with what people will remember of the gameplay too much.

Story of Seasons: Friends of Mineral Town is is the most charmingly twee thing on the Nintendo Switch. It is simple, clean, bright, colourful, wholesome, sweet, and, for people that remember the original on the Game Boy Advance, nostalgic. Story of Seasons encapsulates the desire that many have to retreat to a “simpler life” of wholesome work and earned reward. It’s also a magnificent parallel – in an industry that is so drenched in extreme, unquestioned violence, sex, anger, terror, drugs and “serious themes”, this game is a rare retreat and opportunity to reset. It’s a reminder that it’s okay for games to be warm-spirited… and that’s a sadly rare thing these days.