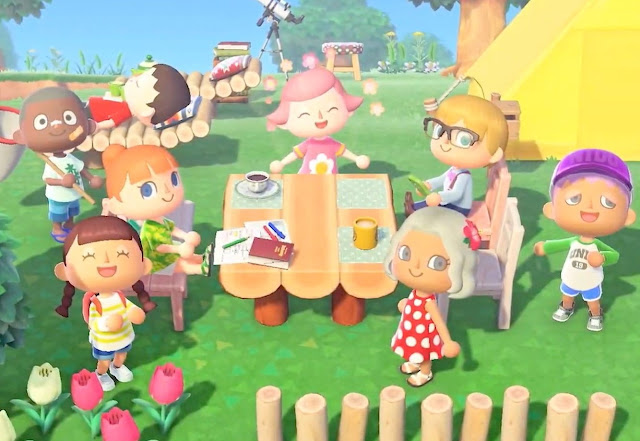 Deep breath here, because what I’m about to say is going to get me in a lot of trouble with a certain category of people. It happens every time a Nintendo game trends high and sells a lot of copies; if you say anything other than “it’s the perfect game,” you inevitably get yelled at for having the audacity of having an opinion. But I’ve got to say what I have got to say, and I didn’t love Animal Crossing: New Horizons quite as much as I’m apparently meant to.

Now that’s not to say it’s a bad game, because it’s not bad at all. It’s excellent, and the reason that it’s so appealing is immediately clear from looking at any single screenshot: New Horizons has a layer of charm and polish that is executed with such precision that it can be actually difficult to pin down and understand how the development team managed to pull it off so well. The big, bold animal characters that roam around the village have more subtle and nuanced personality than they should thanks to their adorable little responses and actions, and the way the world rolls as through you’re on a little cylinder adds a serene gracefulness and the sense that you’re reading a particularly vivid animated pop-up book. Every activity you undertake is imbued with charm, too. The little quips that pop up whenever you catch a fish are eminently screenshot-worthy stuff. “I caught a catfish! I’m more of a dogfish person” is my favourite for the pure dad jokiness of it. And, of course, there’s the appeal of slowly filling up your growing house with all kinds of fun junk. It says something about humanity’s innate desire to hoard that filling a house with stuff (most of which is not interactive and therefore pointless as a gameplay mechanic) is so appealing, and Animal Crossing taps into that with perfection.

Everything in Animal Crossing is so firmly committed to being nice that it’s almost dangerously sweet. We all joke about how Tom Nook is a vile capitalist, and he absolutely is, dumping massive loans on you with a chuckle and a wink, but he’s so friendly about it that even the most rabid Marxists among us still love him. It helps that Animal Crossing helpfully (and conveniently) does away with any consequences for not doing capitalism well enough (i.e. homelessness, starvation, social ostracisation and death) that the game is almost naively nice about the very ideology, but nonetheless we all love it because it’s oh-so-nice about it. Likewise, there’s no chance that anyone that comes to live on the island is anything but a doe-eyed angel, and there’s no risk of running out of anything in your endless pursuit of stuff to build and add to your home and environment; you can take an axe to a tree and it’ll drop a couple of pieces of wood, but that tree’s never coming down and it’ll have a new supply of resources for you to tap the very next day. The game’s just that nice is just papers over… how we end up with paper. 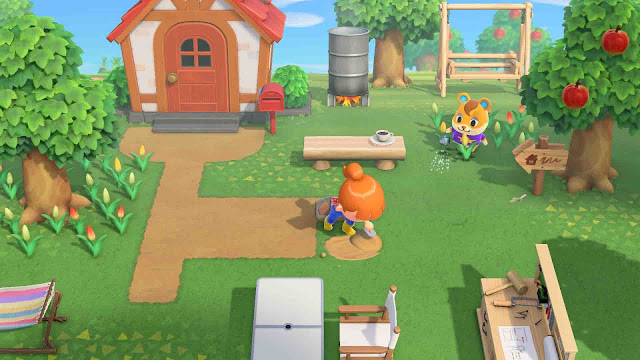 There is something slightly insidious about how completely nice Animal Crossing is. With video games being the dominant popular culture medium they are, the aggressively wholesome way that the game treats activities that we need to have real-world conversations about, regarding their social and sustainability implications, does come across as a form of very soft, very charming propaganda. What is a joke about Tom Nook’s capitalism to some is a tacit support of the myth that life’s not all that bad under these systems to others. Given how this game very much pitches itself at all ages, including the very young, you’ve just got to wonder if there’s a point where being too nice becomes just a touch dangerous. On the other hand, all of that above is me idly musing on the subject. With COVID-19 ripping through all of our lives at the moment, there’s never been a time where we’ve needed nice things quite like this in our lifetimes, and I’ve got to say, Nintendo (by complete accident) released New Horizons at just the right time to give people self-isolated, lonely, scared, and slowly being driven mad by cabin fever a real, genuine escape to a happy place, and for that we should all be very thankful.

If you’ve somehow not played an Animal Crossing game before, it’s an incredibly simple premise by design – in New Horizons, you move to a little deserted island with a couple of animal-people, pitch up a tent, and then… just do whatever you want to. You can get your tent upgraded to a house, which gives you more room to accumulate toys and furniture, but then you owe the aforementioned Tom Nook a loan. Pay it off, and then you can get an even bigger place. That’s the main “progression” system, but there’s no time limits on it. You can play for years to pay off that loan in tiny increments if you really want to. There’s not even an interest fee.

What else can you do? Well, anything you want, really. You can visit the houses of your buddies, or go fruit picking. You can try and fill out an extended list of fish and bugs to catch, or you can go digging for fossils to help fill out a growing museum. You can help people in the town construct new shops or jump on a plane to visit another real-world person’s island. Animal Crossing never pushes you into doing things, and never aims to give you any real structure to how to play. There are some little rewards available as a way of the game trying to encourage you to do as much as possible, but you can ignore entire activities if you want to without penalty. 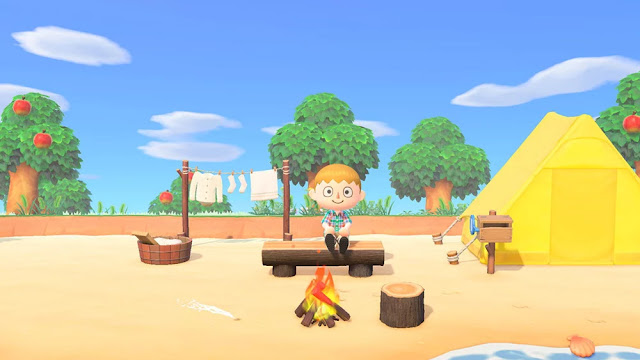 This is how New Horizons distances itself from the likes of My Time At Portia, Harvest Moon, and Stardew Valley – all of those games also offer a largely free world where you just grow and collect stuff, but each of those games do try and do things to push you along. Harvest Moon has a strict day/night cycle for example, and you’ve got to water the crops and tend to the cows each day, where Animal Crossing uses the Switch’s internal clock so that time passes in-game at the same casual pace that it real-world time ticks by. Other games of this ilk try to give players combat or objectives like “getting married” to drive towards, but New Horizons doesn’t care about that. It’s quite noble how carefully the series has stuck to the idea that a truly casual, open game that everyone can enjoy should not do anything that might stress them out.

Unfortunately the game has adopted a couple of elements from mobile games and other such content-driven nonsense that does mean that New Horizons is more gamey than titles have been in the past. Most egregious of these is the crafting system. There is a massive wealth of tools, pieces of furniture, and other things that you can now build at a workbench, as long as you’ve got the recipe and the base materials required. I really, really do not enjoy crafting systems in games, and it’s because they turn everything in the game into an endless, downright absurdist, grind for virtual stuff in order to produce refined – but no less practical – virtual stuff. New Horizons is less offensive about this stuff than some other examples, but where in previous games you’d pay for a fishing rod (or whatever) and then keep it for good, now stuff has durability, and every time it breaks you’ll need to wander around, grabbing some sticks and whatever else, before heading back to the workbench to create another exact copy of what you were just using. There’s never a shortage of materials, but it’s busywork, and too often it’s disrupted a lovely fishing session that I was having, where in the previous Animal Crossing on 3DS, I would often jump into my game just to spend a half hour casting the virtual line into the water. That ability to enjoy uncomplicated, un-distracted gameplay purity is very much missing from New Horizons.

The rewards system also tries hard to be busywork. You’ll need to jump into the game every day to get your reward (an escalating bonus for consecutive days logged in), and then you’ll get additional bonus points for hitting milestones. As I said earlier there’s no penalty for doing things at your own pace or ignoring activities, but it’s nonetheless a very grindy, mobile content-like reward system and the two-tier economic systems in New Horizons are at odds with the idea that you should be able to chill and just do whatever you like. This time around the game really wants you to get into routines for rewards. 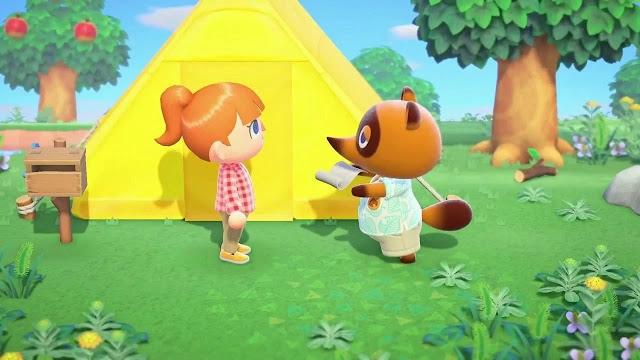 It really is a joy to play, though, and slowly design the entire town around your tastes. That’s a new feature – previously customisation outside of your home was relatively limited, but with New Horizons you can terraform everything if the mood strikes. Being able to lay down paths, plant flower beds, raise and level mountains, re-direct rivers, and fill your house with everything from the retro to the chic remains the core Animal Crossing experience, and the sheer scope of creativity that is enabled this time around is staggering. I spent something like 300 hours immersed in my little town back on the 3DS, and I can easily see myself doing the same in my effort to craft my perfect little paradise with this one. The little irritations that I mentioned above are a non-issue once you settle down into playing the game in the rhythms around which it was designed, and at half an hour or so play every day, the game acts as a wonderful mental break and moment to lift the soul.

We all need games like Animal Crossing: New Horizons, and while I don’t think it’s perfect by any means, and some of the new elements this time around come at the expense of what made previous titles so wonderful, the winning charm is still there in full. This will be Nintendo’s biggest game of 2020, and with good reason – everyone who has been looking forward to it will be absolutely delighted by what Nintendo has delivered.

The publisher supplied a copy of this game for the purposes of review.