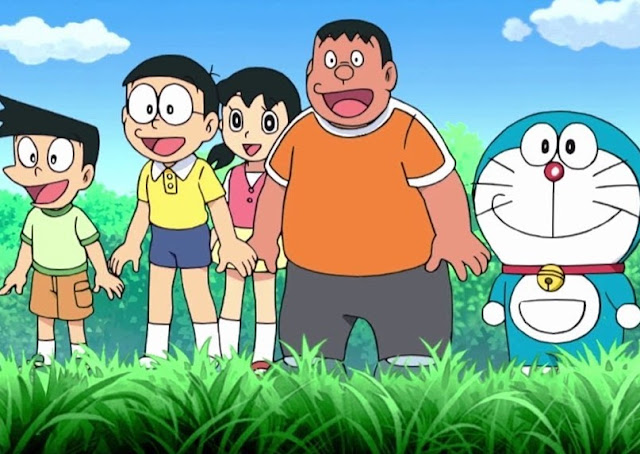 I think a lot of people were surprised when a licensed crossover was announced between Doraemon, the blue robot cat of Japanese manga, anime and film, and Story of Seasons, the farming simulator that has acted as the spiritual successor to the Harvest Moon series. However, it takes about ten minutes of play to realise that the pairing is perfect – Doraemon is the wholesome core to Japan’s manga industry, and Story of Seasons is so wholesome and pastoral in its own right, that they pair as perfectly as a great steak and wine.

Related reading: For more information on how Story of Seasons plays out, check out Clark’s review of the 3DS original here.

Before talking about the game, however, an explanation of Doraemon is in order, because he’s not quite the name outside of Japan that he is to his people, and therefore some of the gravitas of having him and his crew in this game might be lost. Doraemon is the creation of Fujiko F. Fujio – a pen name that a duo of artists used throughout their career – and first appeared on the scene as far back as 1969. He is a blue, time-traveling, robot cat, with a special pouch that he can reach into to pull out some truly fantastic objects from the future, including a door which can be used to jump between locations, and a propeller that allows Doraemon and his friends to fly. The manga focuses on the amazing adventures that Doraemon and a group of four kids get up to, thanks to these abilities.

The adventures excite the imagination, while the interactions between the characters share the kind of moral lessons that good children’s entertainment should. It was a massive success, too. Well over 1,000 stories have been created, over 100 million copies of the manga have been sold, and the film series is the biggest, by total number of admissions, in Japanese history. Such is the cultural impact that it was Doraemon, not a Studio Ghibli film, Sailor Moon, nor Astro Boy, that was honored as being Japan’s first anime ambassador, recognising it as an important cultural artefact that people can use to deepen their interest in Japanese culture. There’s a museum dedicated to Fujiko F. Fujio that is every bit the quality experience that the Studio Ghibli museum offers, and Jean Reno has even performed at Doraemon in a series of TV ads. You know that you’re important when Jean Reno would do this to himself to play as you:


Doraemon captured the heart of the nation in a way quite unlike anything else, and as a little side-note, one of the things that initially attracted people in Japan to the Danganronpa series was that Monokuma was voiced by Ōyama Nobuyo, who was famous as the voice of Doraemon for the longest time. Hearing that iconic voice, associated with the good-natured charm and hijinks of Doraemon, turned to a twisted parallel and parody of what Doraemon stands for, was a truly inspired bit of casting and play on the Japanese culture.

All of the above is why it is so instantly exciting to see Doraemon and the kids pulled into an alternative dimension and deposited on the front door of a farm in a small, rural community. It’s immediately the set up for a Story of Seasons/Harvest Moon title, but it’s also one that brings with it the promise of a grand Doraemon adventure, just like in the anime and manga. The cross-over could not be handled more seamlessly. From there the game hits all the notes of a Doraemon narrative, from the wholesome suggestion sense of community that is depicted throughout, to the charmingly innocent sense of humour that permeates every cutscene. It helps a great deal to have some familiarity with Doraemon going in, but the themes and tone of the game are universal.

On the Story of Seasons side of things Doraemon doesn’t push things. You’re still given a plot of land, which you’ll still turn into a thriving farm, filled with growing crops and adorable animals to extract eggs and milk from (no abattoirs in this here world). You’ll ship some of that produce for cash, and use the rest to cook up delicious dishes to eat, or give as gifts to build relationships with other locals. There are festivals to participate in, plenty of ocean and lakes to go fishing in, and aside from a very vague goal of eventually getting Doraemon and the crew home from this strange dimension that they’ve found themselves in, Story of Seasons continues the laid-back, easy-going, lazy pacing that people love from the series. 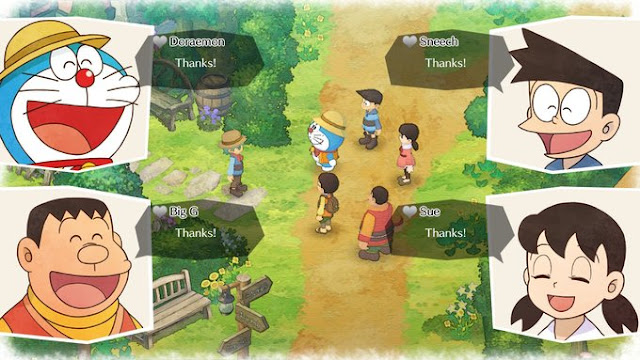 There’s no antagonist, no real way to fail, no pressure, and nothing designed to really test your gaming skills. There are little things that you can do to “play better” (efficiently design your farm to maximise the produce output, or make good use of fertilisers and other techniques to improve the quality of the produce), but you don’t really have to worry about that stuff if you don’t want to. You’ll do fine simply buying the right veggie seeds for the season, watering them every day, and making sure the animals are cared for. Really, it’s so much more fun being creative and making patterns in the crops that you plant anyway.

Doraemon Story of Seasons is a gorgeous little game, too, with a pastel aesthetic that perfectly matches the pastoral lifestyle that you’re getting into. The little profile images of Doraemon and the gang that pop up during cut scenes are spot-on to the Doraemon personality, and the music is a great blend of Doraemon’s iconic musical tones, and the laid-back, rural soundtrack of Story of Seasons. As simple as it might look in screenshots, in motion Doraemon is a genuinely immersive feast for the eyes, and every time I sit down to play this game, I end up pouring much more time into it than I expected, as it puts me in such a good and relaxed pace.

Doraemon Story of Seasons brings the best of the long running Harvest Moon/Story of Seasons formula together with a true cultural icon of Japan. It’s rare that the Doraemon video games make their way out west, but this one works so well as a Story of Seasons title that if it is your introduction to Doraemon, you’re in for a treat. Even if it means you’ll then have around 1,700 episodes of the anime to catch up on (and no, that’s not an exaggeration).