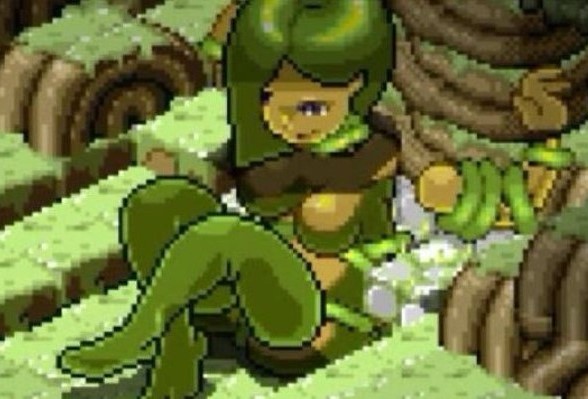 I’ve played a lot of games that relish and delight in juvenile humour. Moero Chronicle is a game in which a male character has the ability to “release” his “pent-up” energy on half-dressed monster girls to make them fight better. Omega Labyrinth makes a mechanic of increasing the boob size of the protagonists in order to power them up. There’s that Senran Kagura pinball game where the main goal is to whack your ball into various parts of the anatomy of various girls. And, of course, there’s Gal*Gun, which, just for a change of pace, shifts the focus from back-breaking chest sizes to instead challenge players to flip as many skirts as possible. Seriously. The video game industry is so wildly juvenile that Dead or Alive Xtreme 3 comes across as the classy alternative because, pinup aesthetic as it is, it’s also within the bounds of human believability and the game’s humour manages to sidestep blunt innuendos and crassness.

Why mention all those games? It’s because Hakoniwa Explorer Plus somehow manages to out-juvenile them all. One of the first characters you come across is called “Milf.” Walk up behind an NPC and a little dialogue box will pop up, pronouncing “BOUNCY, BOUNCY” with the implication being that you’ve just grabbed the girl’s backside. A few minutes later you’ll encounter an “evil” character who will force you to grope her over and over again, tallying up a debt 1,000 GP with each touch, and making it as difficult as possible to break out of the dialogue cycle. It’s like Tom Nook from Animal Crossing, only far, far creepier. Nothing is sacred in Hakoniwa Explorer Plus, as it gleefully throws the most trashy, cancel-worthy jokes out there, rapid-fire. 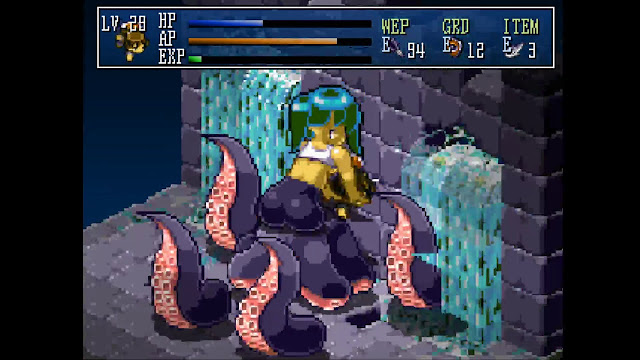 It also does that with almost no real purpose, and the game is more than aware of how arbitrary it is, making fun of its own lack of narrative progression or gameplay variation. You’ll wander around a little map, discover a new dungeon to explore, and then run through that, beating up all kinds of provocative monster designs, jokes about tentacles and the “weak spots” being the backsides galore. Then you’ll clear that dungeon, get a hint about where the next one might be, and every so often you’ll come across a new town to rest up in, complete with a mob of NPC perverts and weirdos to interact with.

Combat is a simple, one-button affair, with equipment that degrades with use (and tends to degrade very quickly). Loot is dropped in copious quantities, and the inventory is very limited, so there’s always an excess of stuff to what you can possibly cart around. The game also moves at such a snappy pace that you’ll be flying through each and every dungeon, levelling up like crazy, and barely registering what you’re doing. Certainly, Hakoniwa ensures that you never have the opportunity to become bored, shallow as the game tends to be.

Hakoniwa doesn’t play particularly well. It’s so easy to accidentally attack an NPC when you’re trying to talk to them (which can lead to some very nasty expletives and a quickly dead hero… Milf doesn’t **** around). And, when you do want to attack things, the isometric perspective, voxel art, and limited attack range combine to make it harder to connect than you’d expect. For individual normal enemies that’s not such a problem, but boss battles can quickly descend into chaos as you mash the attack button like crazy, hoping that you’re close enough to ram your sword up the monster-girl’s exposed, vulnerable backside. It’s a wild game. 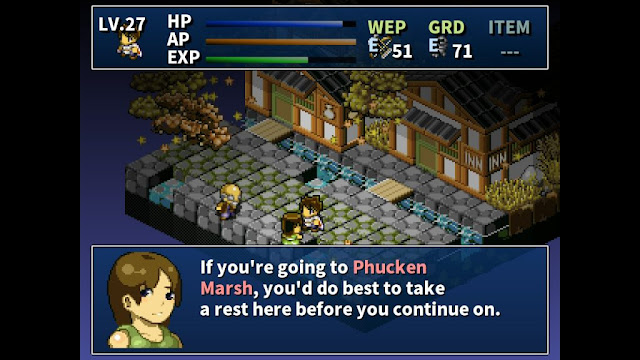 I do think that the developers realise the many weaknesses of Hakoniwa, and they chose to just roll with it – it ends up being a highly playable thing simply because it was designed around it not playing particularly well. Indeed, it’s one of the most brazen games I’ve played in quite some time; not only because of its themes, but also because there’s no pretence behind it. So many other games try to disguise a lack of meaningful depth behind layers of interfaces, systems, and needlessly obtuse tutorials. Hakoniwa is what it is, and love it or hate it, it is honest about itself.

You need to have a high tolerance for crass to enjoy Hakoniwa. This game is less “fan service” than it is an actual perversion, but if that kind of eyes-wide humour appeals to you then Hakoniwa is very, very funny. You’ll probably only play it once because jokes are never as funny when repeated, but for that first run though, there’s a sense of glory around the game; this thing offers a kind of joyous, unbounded creativity that it’s impossible not to sit back and wonder at just what kind of process went into the making of it.

The third Anima game has been announced

Go on the go: The Switch gets an excellent Go tutor!