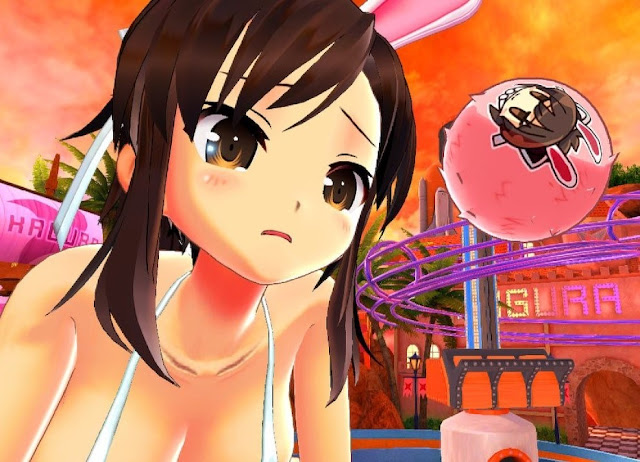 Senran Kagura, at its best (i.e. in the earlier entries) did a brilliant job of taking ridiculous, heaving, over-the-top sexuality (i.e. gigantic boobs) and using it to satirical and comedic effect. There was close to a visual novel’s worth of depth sitting behind those characters and their feminine assets, and the storytelling could be surprisingly nuanced in the way it presented its humour at times. As a result, much like with Dead or Alive, I found myself an instant fan of the series, its characters, and the good-natured, satirical way it went about its fan service. Those were right down the line as my kind of games.

Related reading: Our review of the HD Remake of the original Senran Kagura, on PlayStation 4

Things are different now, though, and that saddens me. Now Senran Kagura has done away with any pretense of satire and instead aims instead for something that could only be called “grotesque”. Each new entry seems to be aiming for ever more extreme sexuality, and finding the most explicit way to focus on each character’s gigantic (and growing) breasts that the development team can possibly get away with. No longer is there any effort to give characterisation to these walking mammaries, and indeed if it were not for those earlier games I suspect I would struggle to remember any of the character’s names, based on how they’re presented in recent titles. What plot there is simply exists to fetishise the characters even further. Senran Kagura: Peach Ball is the epitome of this new approach to the series, and while it’s so obscene and over-the-top it will illicit a chuckle or two along the way, the yearning gap between this series, and those like DoA that do something actually interesting with the fan service, is only growing wider.

Peach Ball is Senran Kagura pinball, basically. Your goal is to accumulate points by hitting a ball around a table so that it reaches specific areas and achieves a range of objectives along the way. Most modern pinball tables have objectives located all over the place, and high scores require a mastery over angles, line and physics. Peach Ball, on the other hand, offers one principle objective: one of the girls from the series is in the middle of the table, and you’ve got to hit her with the ball. The developers have been generous here. The girls are giant sized, and each girl is in some variation of the doggy pose, and courtesy of gravity her breasts are large enough to hang halfway down to the ground. That, there, is a big target to aim for. 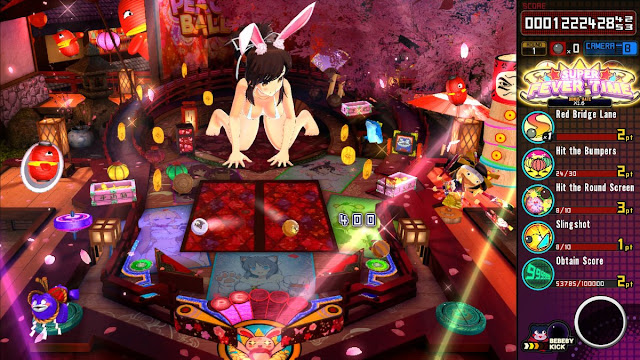 Sadly, Peach Ball’s tables aren’t very well designed at all. This isn’t Zen Pinball with its intricate layers of ramps and targets. It’s also not Zaccaria Pinball‘s remade tables from the 70’s and 80’s. This isn’t even Pokemon Pinball from the Game Boy Color, when rendering limitations were so extreme that the play field was almost empty. Simple as the latter two are, Peach Ball takes “simple pinball table” to a whole other level, and the principle reason for it is the two massive hooters and the body that they’re attached to, smack bang in the middle of the play field. There’s just very little room for anything else. Actually hitting the girl’s legs, arms, or chest (when she’s collapsed on the play field… more on that later) isn’t necessarily easy because what few obstacles there are make the angles of hitting the middle of the play field hard, but as any good pinball designer will tell you, that is not the most interesting way to create challenge in pinball.

Complete some objectives and you’ll be whisked away to a little mini-game. There are a fair few of these, but the goal is always to hit a ball towards some targets within a ridiculously small play field. It’s hard to fail at these mini-games, but you’ll feel good about your success anyway, because you’ll earn huge points from doing so, and then, after being whisked back to the main play field, the girl will be collapsed on the field, allowing you to whack balls against her boobs for even more points. Don’t worry, the balls are as fluffy as a porn star’s handcuffs, so she won’t bruise. Keep piling up those points and completing missions, and eventually you’ll get a super-dooper minigame, where you’ll… again… whack balls into the girl’s breasts (or cut the middleman out entirely and simply rub the pinball bumpers over her nipples). At the completion of that (nearly impossible to fail) mini-game, the girl will be stripped naked and you’ll get even more points. That’s also how you complete the story missions, so after the naked scene, you’ll be able to move on to the next one.

Peach Ball’s scoring system goes to 12 digits – you read that right – and the whole game is tailored around ensuring that you’re successful at getting the scores right up there. The physics and mechanics of pinball are spot on, to the game’s credit, but the flippers are overly generously sized, the speed of the ball is slow enough that timing windows are also too generous, so after an hour’s or so play I found myself deliberately letting the ball fall into the gutter, just so I could push the game along a little. Peach Ball was certainly not designed to challenge your pinball skills, though in the story mode some of the latter chapters have objectives for completion that will at least cause you to thick momentarily about what you’re doing while playing. 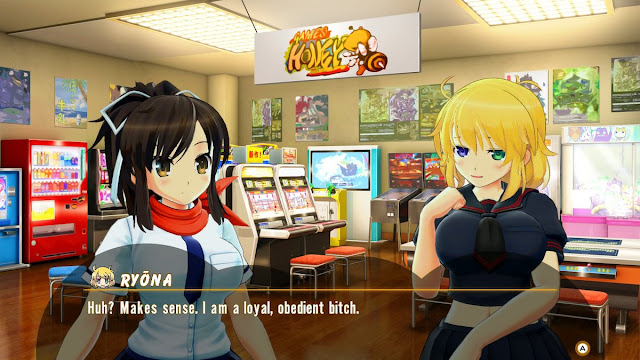 The narrative, what little of it there is, involves each of the Senran Kagura girls being turned into a furry thanks to some chemical mixture. It’s really just an excuse to put them in animal fur panties and start calling one another “bitch,” so there’s not much analysis of the plot that I can offer there. I do miss the days when Senran Kagura had that more genuine intent behind the storytelling. Instead of an interesting plot, the reason you’ll push through the missions in this one is to each cash to unlock fetish-wear alternate costumes, like schoolgirl swimsuits, pajamas, teacher and gym uniforms. Then you can jump on into the diorama mode to pose the girl in whatever demeaning position amuses you most… or just squirt her in her boobs or crotch with a water gun if that’s your idea of a good time instead.

The sad thing is that there are tantalising possibilities evident all through Peach Ball. The game’s presentation is absolutely gorgeous. There’s one particular set of levels that is very reminiscent of the decadence of the Yoshiwara red light district (the pleasure district in old Japan), and the character models are as stunningly animated as you might expect, given that the entire point of the game is to ogle them. As I was playing I kept thinking just how amazing this game could have been if it aimed to be a more sincere “floating world” experience – something genuinely decadent, exotic and erotic – rather than a dumb jelly physics simulator. I would absolutely love an In The Realm Of The Senses pinball, for example. I also couldn’t help but think that with more effort into the table designs (and more than just two tables to play on), Peach Ball could have been seen as a really, really good pinball title. The pinball physics really are great.

I love fan service and sexy games. On the Switch alone I’ve put more hours into Dead or Alive Xtreme 3 than I care to announce, and love the satire of stuff like Kotodama and Gal*Gun 2. Over on PlayStation 4, the raunchy grindhouse of School Girl/Zombie Hunter and Onechanbara likewise amuses me. In each case, though, the fan service serves a purpose – whether it’s to be genuinely sexy, or to enhance a satirical theme running through the narrative. Senran Kagura used to be like those, back when we were getting brawlers with visual novel stuff between fights. Now, though, I do think that the developers behind Senran Kagura have lost sight of all this. Between Reflections from earlier in the year and now Peach Ball, the series now seems to be a case of inferior game design built over the top of something pointlessly crass, and subsequently (and ironically) quite lacking in sex appeal. 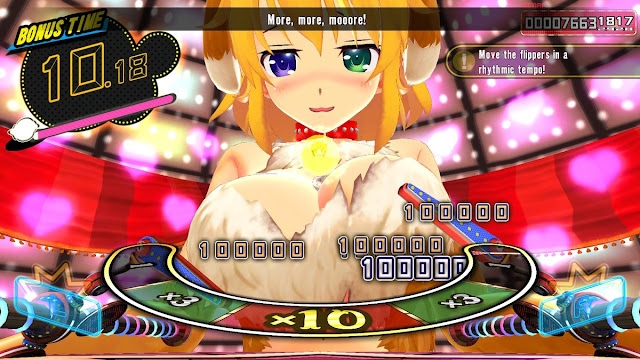 You’ve got to ask yourself: if you’re looking for quality pinball, would you not be better off playing a pinball title that offers actual quality? And if you’re looking for something sexy, would you not be better off looking for something actually sexy? Peach Ball is broadly entertaining, but it’s hardly a pinnacle in either case. I will give the developers credit where credit is due though: for the longest time I’ve been saying that Senran Kagura should follow the lead of the likes of Dead or Alive and include a wider range of chest sizes. Flat is justice and all that (Marie Rose for life). But here, with Peach Ball, it really is the case that only huge and sagging oppai can work. Gotta players a target that will hang nearly to the ground when on all fours to give players that target, after all. Well played, developers. You sure got me there.